Karaikkal Ammaiyar - The Mother from Karaikkal

Karaikkal Ammaiyar (The Mother from Karaikkal) lived in Tamil Nadu in 6th century. She was a poet-saint, one of the 63 Shaivite Nayanmars. This sculpture is a copper alloy, about 9 inches high, dated during the Chola period (880–1279). . It is now at the Metropolitan Museum. 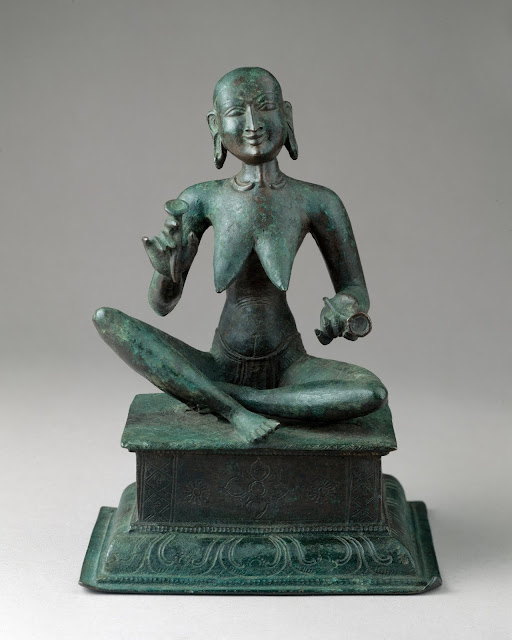 Karaikkal Ammaiyar belonged to the Chettiar (Nagarathar) community. She was a devotee of Lord Shiva, and said to be very beautiful. On seeing her perform miracles, her husband recognized her divine nature, and worshipped her as a goddess. She left her home, and went to Mount Kailash, on pilgrimage to Lord Shiva's abode. She prayed to Shiva to transform her into a ghoul (gana), one of Shiva's many attendants. Shiva granted her wish, changing her into a wizened old woman.

Thus she became free of the burden of social norms, and spent her life as a free spirit, composing and singing hymns in praise of Shiva. In this sculpture, you can see her holding a pair of cymbals as she sings her own compositions. The sculptor has stayed within the stylistic tradition of Chola art, with fine nose, curved lips, large eyes, square shoulders and slim waist. Thus he maintains her divinity. He has chosen to represent her ghoul transformation by focusing purely on exaggeratedly deformed breasts. He has chosen to represent her mendicant status by giving her only a single garment. And, to show her great age, her ear lobes are sagging with the weight of her ear-ring (a feature of older women). 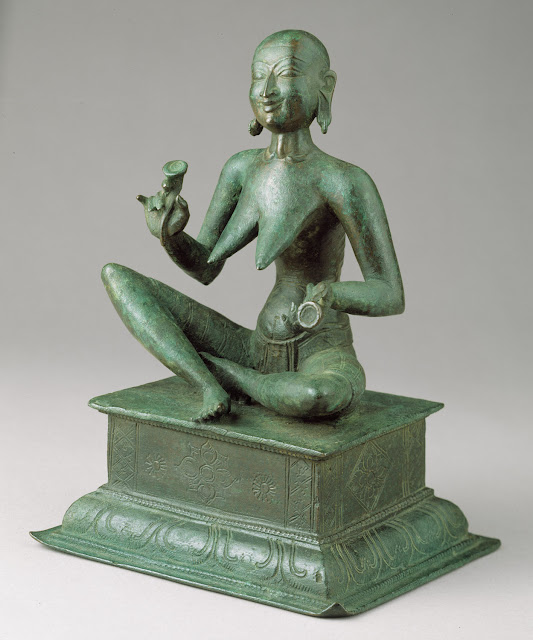 Beginning in the 6th century in Tamil Nadu, India witnessed a widespread Bhakti movement, where several women rejected the life of a householder, and embraced a life of devotion/renunciation, Examples include Andal from Tamil Vaishnavism of the ninth century, Mahadevi Akka of Karnataka (13th century), Muktabai of Maharashtra (13th century), Mirabai of Rajasthan (16th century), and many more.
Posted by Deepa at 6:45:00 AM