Everything is divine - a lesson from a Chennai pavement

While walking to Besant Nagar, I saw this by the roadside. Just a regular stone, possibly a milestone marker.

Someone had anointed it, and offered worship. With the drawing of the 3 lines, the Stone became Shiva. 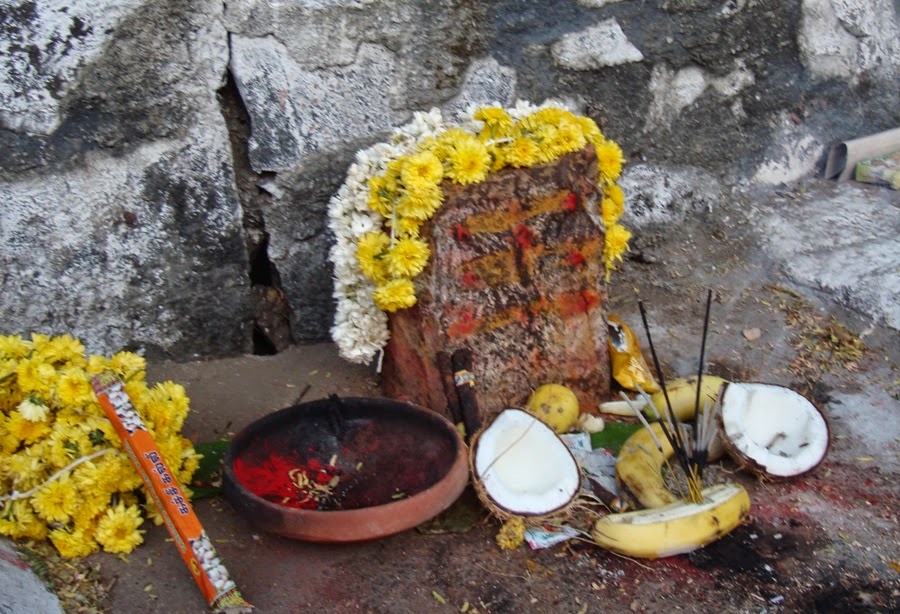 Thus are gods born. And thus I learnt that the divine is everywhere, if only we develop the ability to see it.

I am not particularly religious, but instinctively I can sense the truth, that the essence of everything in the universe is the same. Stone, flower, bird, animal, water, land, air....ultimately as we look deeper and deeper into each of these, the differences melt away.
Posted by Deepa at 2:25:00 PM No comments:

The waterways of Alleppey are extensive. Boats are the easiest and quickest way to get around and many families have their own boats.

Some boats, like the one in this photo, are fitted with an outboard motor. They are used not only for personal transport, but also to ferry goods. 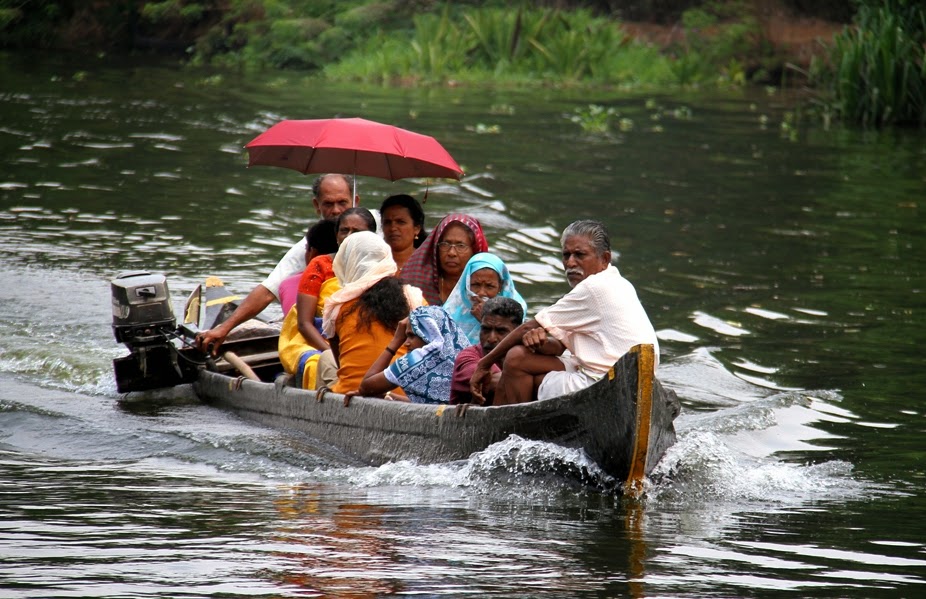 The Salt-Pan Workers of Tamil Nadu

On our way from Chennai to Pondicherry, we saw sea salt being manufactured. 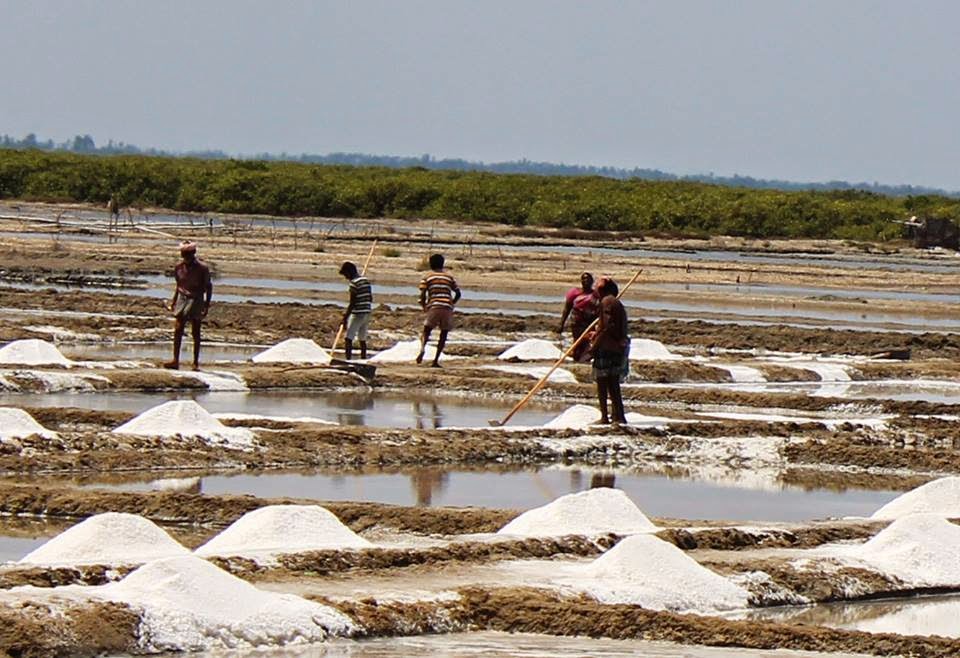 Sunny hot days like this are essential for salt production. There is no work in the rains. The majority of people work as wage earners in saltpans and do not have any influence within the salt value chain.

Tamil Nadu is the largest producer of salt in India, next only to Gujarat. There are around 60,000 salt workers in Tamil Nadu, on which nearly 80% work directly in the salt pans. The remaining 20% work in loading, packing and transport.

The total annual income per household in the range of Rs.10000, with both husband and wife working on the saltpan. Women are paid lower wages than men for the same work. The work is mainly seasonal, with very little options for off-season alternate livelihoods. Usually salt pan workers are neck deep in debt. Interest rates on loans (from informal sources) is around 60% per annum.

The manufacturing processes is very labour intensive, in very hot and windy conditions for most part of the day. Most workers have problems related to eye sight due to reflections of sunlight from the salt crystals. Work begins early in the morning, and children are left behind at home. Most children of the community do not have access to schooling or healthcare.

The industry is also highly disaster-prone, experiencing frequent threats of cyclones and high tidal waves.
Posted by Unknown at 4:48:00 PM No comments:

The shadow puppetry of Andhra Pradesh is a dying performing art. In local language, it is called Tholu Bommalaata, and it is done by traditional clans of puppetters who go from one village to another. Families of puppetters not only perform the show, but also make beautifully decorated puppets. The puppeteers use the epics as the basis for the performance, but also create, compose and insert their own variations. In recent years, they have added songs from Telugu movies, and humorous asides with modern settings. However, like all traditional performing arts, the puppeteers are no match for modern entertainment forms such as television and the movies. 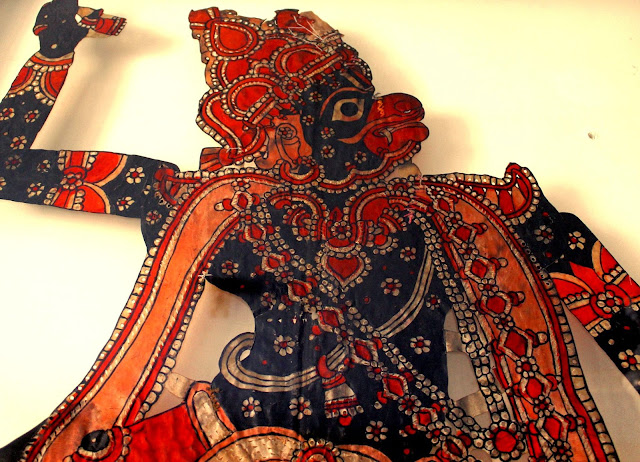 The photo here is of a shadow puppet depicting Hanuman, one of the characters from Ramayana. This puppet dates to the 1930's, and is very beautiful, although it shows some wear and tear. The creator of this puppet has displayed a masterful understanding of colour and form, using red, black and white to create a striking yet beautifully embellished puppet.

Annamāchārya (also called Annamayya) is a 15th century Vaishnavite saint, known for his devotional songs (sankeertanas) in Telugu. Written in a very personal and evocative tone, Annamayya's compositions epitomise the feeling of bhakti. In his sankeertanas, he addresses Vishnu as one would a real person. He quarrels affectionately with Vishnu, implores Vishnu, glorifies Vishnu, and surrenders completely to Vishnu. This intensely personal experience of bhakti makes Annamayya's compositions very moving.
Annamayya's beautiful compositions lay forgotten for over three centuries, and were discovered concealed in a small room inside the Sri Venkateshwara temple at Tirumala in the mid-1800s. Since then, the Tirumala Devasthana Trust has been preserving these compositions. The well known Dr. Balamuralikrishna has set over 800 compositions of Annamacharya to music, and these are very popular among devotees of Tirupati. The temple trust is also making a lot of efforts to popularize these sankeertanas.
In 1997 a Telugu movie was released depicting the life story of Annamayya. In the initial scene, the movie depicts Vishnu and his two consorts (Bhu and Shri) in Vaikuntha, listening to prayers offered on earth in Sanskrit, Tamil and Kannada. Bhu and Shri comment that although Vishnu presides over the Telugu land, there are no songs or prayers in Telugu. In response, Vishnu's sword (Nandaka) is reincarnated as the poet Annamaya.
Posted by Unknown at 2:15:00 PM No comments:

Kantha refers to a distinct style of Bengal embroidery applied to the creation of coverlets. Traditionally the Lep kantha of old, involved poor village women sewing together layers of old cloth, mostly saris, with intricate stitches. The thread used for the purpose was pulled out of the sari itself. Their meticulous artistry transformed worn out rags into extraordinarily beautiful creations that could withstand further usage. Till today, this combination of thrift and aesthetics is not mass produced and is usually not for sale. The intricate geometry of their design and the near absence of folk motifs continue to be a notable feature of Muslim kantha-making traditions of Murshidabad. 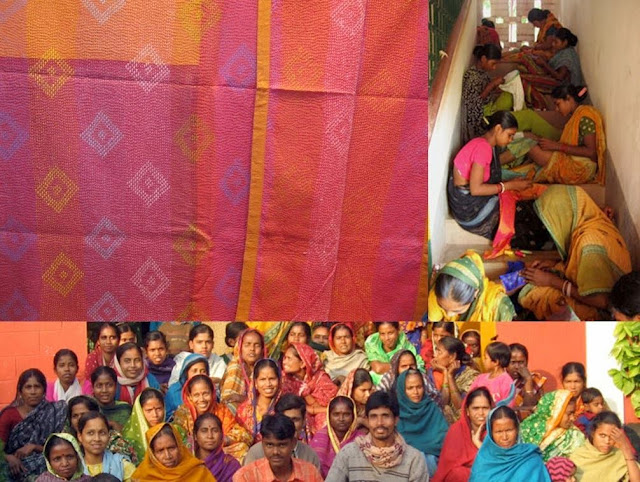 This photo is of a group of women from Murshidabad, and the beautiful Kantha work that they produce. Murshidabad is around 250 kms north of Calcutta.
Posted by Unknown at 10:39:00 PM No comments: