Emperor Aurangzeb - the sixth Mughal ruler - had a long reign of nearly 50 years.

During his rule (1658 to 1707), the Mughal Empire reached its largest extent, covering almost the entire Indian subcontinent. In 1700, India's GDP accounted for one-fourth of world GDP, with textiles playing a major role. Nearly 15% of the population lived in urban centres; it was thus more urban than Europe at the time, or even more urban than British India in the 19th century.

Among the urban centres in the Deccan was Aurangabad. Earlier it was a village called Khadki; but it grew into a city under the patronage of Malik Ambar and the Nizamshahs of Ahmadnagar. When Aurangzeb took over the city, as the Mughal viceroy to the Deccan, he named it Aurangabad.

Aurangzeb spent the last 26 years of his life in an attempt to conquer the Deccan. He died at his military camp in Bhingar, near Ahmadnagar, at the age of 89.

His modest open-air grave in Khuldabad expresses his deep devotion to his Islamic beliefs. He desired in his will that not more than 8 rupees be spent on it - in marked contrast to the ostentatious splendour of the tombs of his predecessors.
Aurangzeb's tomb is in the courtyard of the shrine of the Sufi saint Shaikh Burhan-u'd-din Gharib, who was a disciple of Nizamuddin Auliya of Delhi. 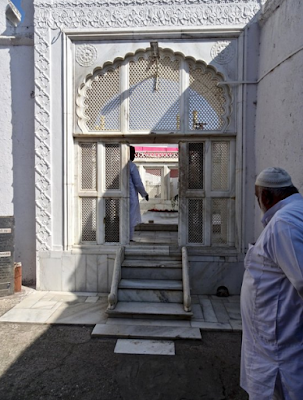 The epitaph reads his own couplet in Persian:
Az tila o nuqreh gar saazand gumbad aghniyaa!
Bar mazaar e maa ghareebaan gumbad e gardun bas ast!
Translation: "The rich may well construct domes of gold and silver on their graves!
For the poor folks like me, the sky is dome enough!"
Posted by Deepa at 12:47:00 PM No comments: Links to this post