Spicy puffed rice is one of the delights of Bangalore. I was starving at the end of our Vidhana Soudha Walk yesterday, but had no time for a meal. I thought this was the perfect snack to tide me over. 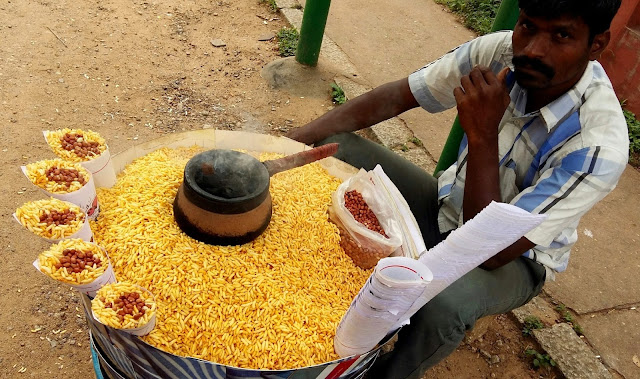 The puffed rice (puri) is spicy. It is called churumuri puri or khara kadele puri. It is sold in paper cones at Rs 10 for a cone. The vendor uses the glowing coals to keep the rice crisp even in the soggy monsoon season. If it rains, he's got an emergency solution - a blue pastic wrap (see photo below). 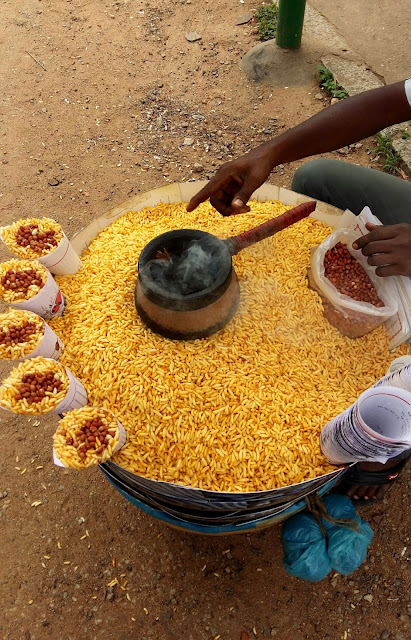 I reckon he sells about 30-50 of these in a day, so his daily income is around Rs 300 to 500. After expenses (raw material, travel, food), I think he probably earns Rs 200 to Rs 300 a day. I don't think he works every day. Weather, illness, family responsibilities, festivals and other social requirements probably cut into his work time and impact his earning capacity. I would have liked to stop and ask about his family, and where they live, what they are doing, etc. But I was late for a flight, so I dashed off.

The churmuri was delicious. In many parts of Karnataka it is also served along with other garnishes, like finely chopped tomatoes, onions, green mango, coriander etc.
Posted by Deepa at 2:55:00 PM No comments:

I photographed this antique "marapachi" couple at the Kanchi Kudil museum in Kanchipuram. They were beautifully and simply decorated in traditional cotton weaves. 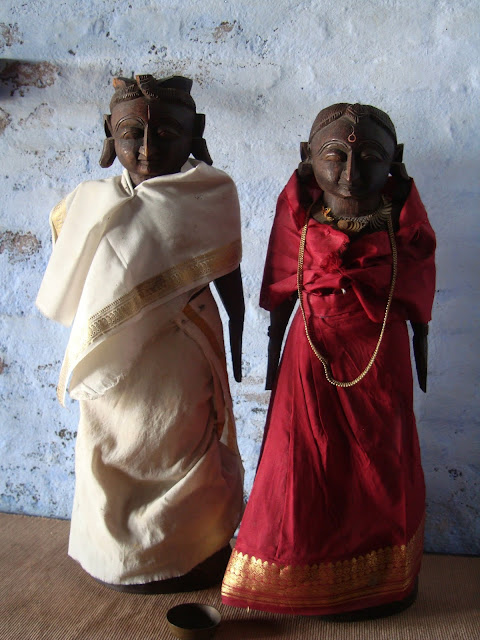 Marapachi dolls are part of the traditional doll collection of south Indian homes. In olden days they were part of a woman's dowry, given to her by her parents during the wedding, to continue the traditon of decorating and displaying them. Typically they are always found in twos, and they represent prosperity and abundance.

Marapachi dolls are displayed during the annual Golu/Navarathri festival (a 9-day festival that usually happens in Oct-Nov).  During this festival, women make attractive displays of dolls and figurines, arranged in a series of steps (Golu padi). The Golu padi is decorated prettily and women from the neighbourhood visit each other to see the golu arrangement. It is a time for socialising and meeting with friends, exchanging news, and singing songs.

Here is the stepped display that I photographed at the home of my dance guru, Dr. Jayashree Rajagopalan. At the bottom row there is a set of marapachi dolls. 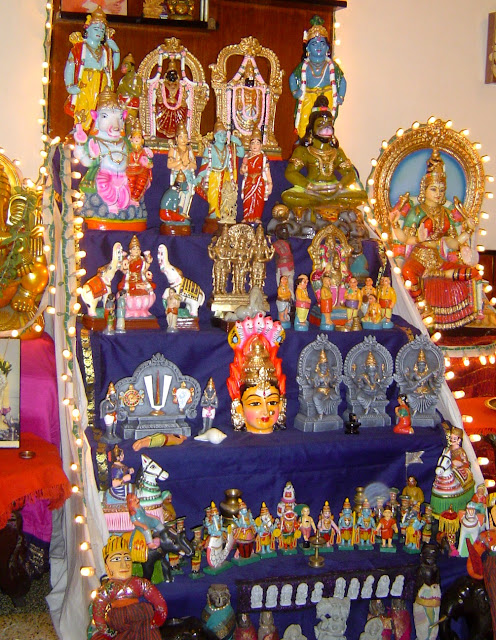 No golu padi is considered ok unless it contains the auspicious marapachi bommai. In some houses, these are the very first dolls to be decorated and placed on the padi. It is a practice to put new clothes for the marapachi bommai each year. Here is the closer look at the bottom row, you can see 3 pairs of marapachi bommai in this photo. 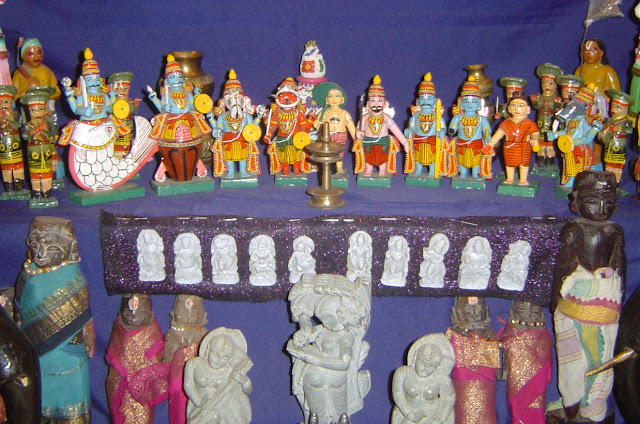 Marapachi dolls are made of teak or rosewood and are not easy to buy these days. In fact it is quite difficult to get large-sized marapachi dolls with aesthetically designed features. I went looking for some in Mylapore but couldn't find them. I have heard that good ones are available in Tirupati. If I go there, I will surely look for some. Meanwhile if you know some place in Chennai or Bangalore where I can buy them, please let me know!
Posted by Deepa at 11:29:00 PM No comments:


While most people know about Kerala's famous banana chips, not many have heard of its country cousin - tapioca chips. Tapioca, or 'kappa' (in Malayalam; pronounced 'cup-pa') is also called 'cassava'. The tapioca plant is popularly grown in the tropics for its edible, tuberous root. Tapioca chips are usually deep-fried and then seasoned with spicy red chilli powder.


Although the chips are rightly grouped as junk food, there are many healthy ways of eating tapioca. It's prepared as a vegetable on its own, cooked with rice, and with fish curry. Sometimes it forms the whole meal and sometimes an appetizer. It isn't uncommon to just eat boiled kappa plain either. 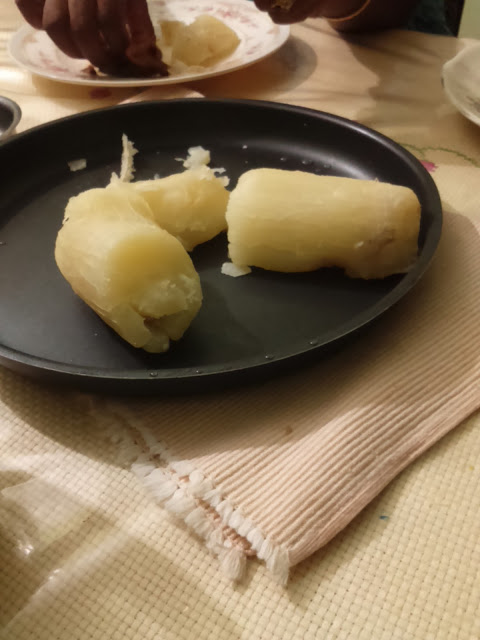 If the starchy tuber is too bland, one can dip it in any available gravy. For those of us, who don't have access to Mallu cooks and cooking skills, mass produced chips are the best way to get a taste of this vegetable. Once considered to be a poor man's meal, as a substitute for rice, its position has risen along with demand. However, production in Kerala is still dwindling. The state's high labour wage rate, combined with inevitable rodent attacks do not make this a profitable crop. Let's hope tourist interest comes as aid to the Tapioca plant!
Posted by Unknown at 1:32:00 PM 1 comment:

Rumi Darwaza in Lucknow - the grandest gateway in India


What the Charminar is to Hyderabad, the Rumi Darwaza is to Lucknow - an iconic monument that immediately identifies the city. Rumi Darwaza, which translates to "Roman Door", is an arched gateway that was built in the 18th century as the entrance to Lucknow.
Why would a very un-Roman looking gate in Lucknow be called Rumi? Because of the Turkish connection, of course.

Perhaps the idea of a grand entry gate came to Lucknow because of the many Persianised Turks who settled in Lucknow. No one knows for sure. Locally, the Rumi Darwaza is also called the Turkish gate. So we presume there was definitely some Turkish influence.

The Encyclopedia Brittanica says that Rumi Darwaza has been modeled on a gate in Istanbul called Bab-i-Humayun. Frankly, I fail to see any resemblance between the two. Maybe it was just the idea of having a grand gate, which came from Istanbul. Here's what Bab-i-Humayun in Istanbul looks like.
Before the Rumi Darwaza, there were many other Indian cities with entry gates. Delhi's Shahjahanabad had gates. Ahmedabad had gates. But no one had ever built such a magnificent gate as the Rumi Darwaza. Its architecture is a mix of Turkish, Mughal, and stuff that is purely Avadh in origin.

Here is the other side of the Rumi Darwaza, which you see after you enter inside the city. I was there on a bright summer day, and clicked these beautiful photos:
As the city has grown and expanded, Rumi Darwaza is now no longer the entrance to the city. It is instead, the beginning of a grand ceremonial road, flanked by the impressive Bada Imambada on one side. Here is the second photo I clicked:
Gorgeous isn't it?
Posted by Unknown at 1:47:00 PM 1 comment:

Architecture of Lucknow - What is an Imambara?

There are many famous mosques and tombs in India, known for their splendorous architecture and intricate carvings. But an Imambara is different from a mosque, and may not necessarily hold the Friday Prayer. It is also different from a mausoleum, though it might contain tombs.

An Imambara is a congregation hall built for Shia ceremonies, especially those which take place in Muharram, the first month of the Islamic calendar. Hussain Ibn Ali, the third Imam of Shia Muslims was killed in the Battle of Karbala in 680 CE. Shia Muslims gather in imambaras every year to mourn his death on the tenth day of Muharram.

There are several majestic Imambaras in Lucknow, that embody the the city's royal history and rich heritage. Two of the most popular ones are Bada Imambara and Chota Imambara. The Shah Najaf and Sibtainabad Imambaras are also historically important.

Bada Imambara
One of the most popular sites in Lucknow, it is admired worldwide for its architectural design and grandeur. It was built by Nawab Asaf-ud Daulah, so it is also called Asifi Imambara.
The entire structure is made of special Lakhanui bricks and lime plaster. No wood or metal has been used. The main hall of this complex is considered to be the largest vault chamber in the world. It is the largest hall in Asia without any external support from wood, iron or stone beams. The acoustics of the hall are such that one can even hear the strike of a matchstick across the length of the hall!

Chota Imambara
Also called Husainabad Imambara, it was built by Mohammad Ali Shah Bahadur, the Nawab of Awadh, between 1837 and 1842. This stately structure contains the tombs of the Nawab, his mother, and many other family members.  It is a blend of Indo-Islamic and Persian styles, and has a beautiful gilded dome. The walls are decorated with Arabic calligraphy. The Chota Imambara complex also has a shahi hamam (royal Turkish bath).

To know more about the other two Imambaras, read Part II of this article.
Posted by Unknown at 11:52:00 AM No comments:

The Chariot Festival at Puri

It is July now, and all eyes in Odisha are turned towards the Jagannath Temple, waiting for the grand procession of the Rath Yatra (Journey of Chariots).

The Jagannath Temple in Puri is an important pilgrimage destination for Hindus all over India. The temple's origins are mentioned in the ancient Puranas, and several religious gurus and sects have made Puri their home. It is believed that a journey to Puri will free a pilgrim from the cycle of rebirth, and lead him to salvation.

Jagannath (meaning Lord of the Universe) is associated with Lord Krishna. The legend goes like this: When Krishna was accidentally killed by a hunter, some devotees found his body and stored the bones. Later, Lord Vishnu directed a king called Indrayumna to make a statue and place the bones inside it. Vishwakarma was asked to make the statue. He agreed on the condition that he be given complete privacy till the work was complete. But the king and queen grew impatient and visited the site while Vishwakarma was at work. This upset him, and he left the statues undone. Even today, Jagannath is depicted without hands and feet.

In Puri, Lord Jagannath is worshipped as a part of a triad, along with his brother Balbhadra and his sister Subhadra.
Three idols are taken in enormous chariots, built specially for this festival. The chariots are richly decorated, and are drawn by the devotees who join the yatra (journey or pilgrimage). This festival attracts a large number of people, both from India and abroad. There is music and chanting, creating a colourful and euphoric atmosphere.

Once the ceremony is over, the chariots are broken down and converted into religious relics. New chariots are made from scratch and beautifully decorated every year.They are a reference to the Bhagvad Gita, a sacred text of the Hindus. The festival is steeped in symbolism and carries forth ancient rituals that have remained much unchanged for centuries.

This year, the Rath Yatra will be even more special. The three patron deities will be given a new physical form. This only happens once in 12 to 19 years! The new idols will be carved from the Neem (Margossa) tree and consecrated in the temple.
Posted by Unknown at 12:49:00 PM No comments: