A Hamaam in a necropolis? 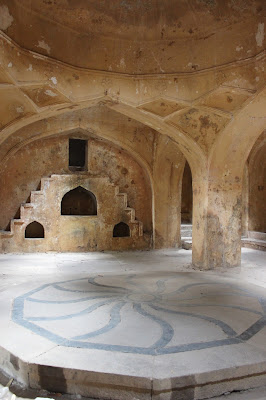 The Qutb Shahi Tombs Complex is one of the most significant historic medieval necropolises in the world, with 70 structures within its complex. It has been nominated for the World Heritage Site listing.

It contains 40 mausoleums, 23 mosques, five baolis (water structures), several pavilions and gardens. These structures were built during the long and stable 170-year reign of the Qutb Shahi Dynasty in the 16th – 17th centuries.

It also contains what is popularly called as the Mortuary Bath. In the photo alongside, you can see a photo of this building. Water was supplied from the baolis, and it was used to ceremonially wash the bodies before burial.

Experts at the Aga Khan Foundation (who are doing restoration work at the complex) now believe that this is actually a bath-house or hamaam, similar to the ones found in modern day Iran or Turkey. The bath house is simply too large and it would have been too wasteful, for it to be used just once in a while during burial ceremonies.

But it's really unusual to have a hamaam in a necropolis. One possible explanation is that the hamaam actually pre-dates the tombs. Yashowant Purohit, conservation architect says, in this interview, “We have archaeological evidence of habitation at the site. We found remains of a mosque and of a sarai (rest house). The habitation could have predated the necropolis. But if it is at the same time, it could give us an answer to the use of the hamaam. The next season of archaeological work should help us uncover more,” he says.

I'm looking forward to more news about this. Here's another photo: 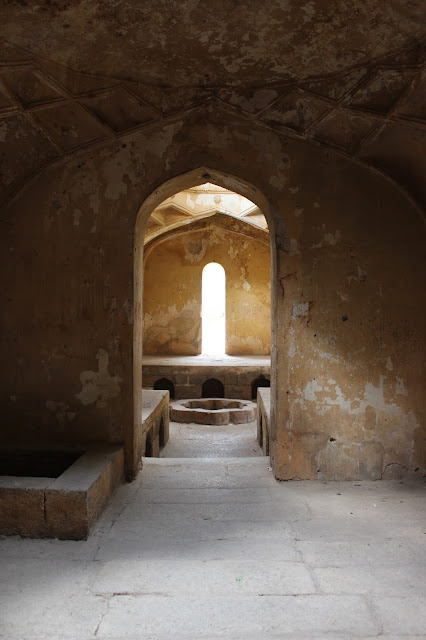