Hooray! Our Chennai Home Cooking tour got featured in the World Travel Guide!
The World Travel Guide is published by Columbus Travel Media Ltd., a UK based specialist company which has been in the business of providing travel information for over 30 years. Their online travel website is more than 15 years old, covering all continents.

The guide is published in four languages - English, German, Spanish and French.

Here is the tour that they reviewed: http://chennaimagic.com/cooking-chennai-tour.html

Fort St George is 375 years old today. Much has changed in the fort: the sea no longer laps at the fort walls. But here is what the fort looked like in the mid 1700s. You can see the British flag flying on top.

As you can see from the photo, the natural harbour was quite shallow. Ships had to anchor over 1 km offshore, and cargo was brought to the shore in small catamarans and 'masula' boats. Cargo losses were high - the masulas in fact usually had 2 men on board to constantly bale out water! Pilferage was also a big problem. In the painting below, you can get a closer look at these masula boats, and challenges of bringing valuable goods onshore in the rough water. Visiting Europeans were also hoisted onshore on top of the fishermen's shoulders :D :D
Naturally, there was a crying need for a proper dock/pier. Efforts began in the late 1700s, but funding was scarce, and building efforts in the first half of 1800's didn't work well. There were multiple problems, year after year, mainly due to the annual storms. But a working port was established in the second half of the 1800's, and the sea began to recede from the fort.


Under Francis Spring, the first Chairman of Madras Port, major changes were done between 1905 and 1911. Mainly, the entrance of the port was shifted from the eastern side, to the norh eastern side, which provided better protection from the elements. Land was reclaimed from the sea, docks and quays were built, and during this process, the sea was pushed further away from Fort St George. A big road came up between the fort and sea (Rajaji Salai, which was called North Beach Road).

Today when we drive on Rajaji Salai from San Thome, we see Marina Beach to our right, and Fort George appears to our left. The docks are to our right, but all of it is not clearly visible from the road. To the north of the fort is 'Black Town', which was the residential and bazaar area where Indians lived. You can understand it better by seeing the map below:
If you are driving past that area today, stop and take a look at the fort walls. You'll see the Indian tricolour flying high! 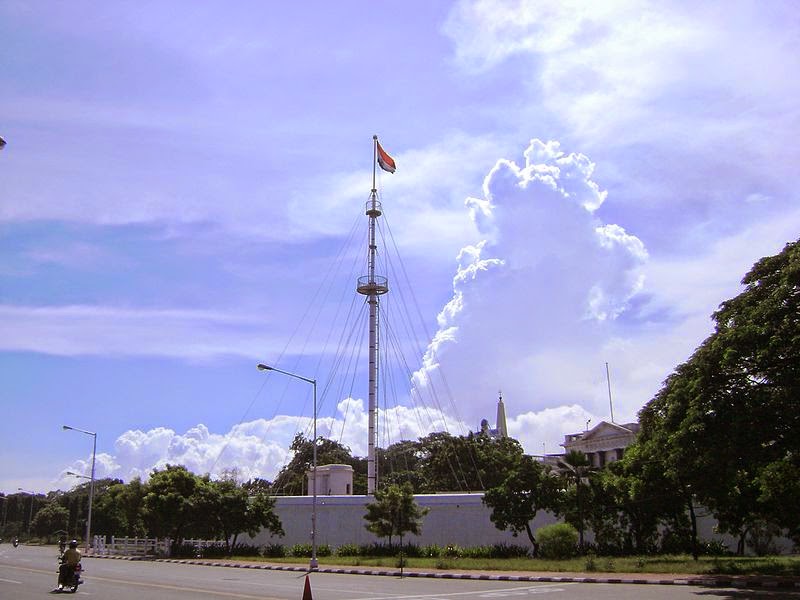 The Shaking Minarets of Ahmedabad


Below is a painting of the Shaking Minarets of Ahmedabad, also known as the Jhulta Minar. It is one of the architectural wonders of India. 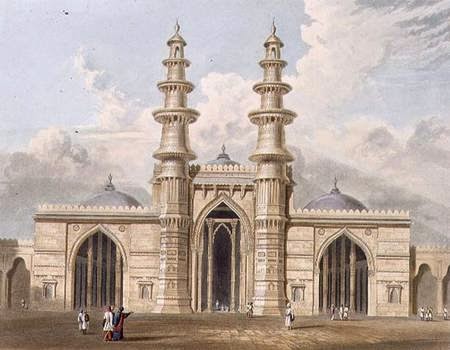 This painting is of the Minarets at the mosque of Siddhi Bashir. There is another Jhulta Minar near Bibi ki Masjid, Gomtipur.
The mosque was built by Ahmedshah in 1430 in the memory of his mother. Built with super craftsmanship, the Minar sways whenever the slightest force is applied on its upper arc. 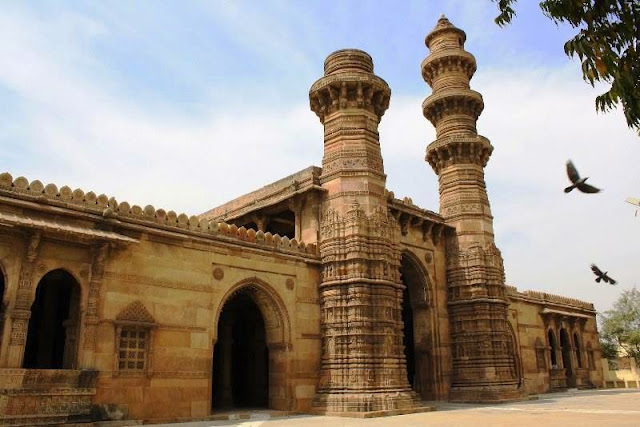 The Jhulta Minar in Bibi ki Masjid, Gomtipur is now on the brink of collapse. The monument has suffered certain damage due to attempts by the British to understand the cause of the vibrations, and the Bhuj earthquake in 2002. But one of the minarets still sways.
When one minaret is shaken from the upper arc, the other also begins to vibrate, though the passage connecting the two minarets remains vibration-free.
Though several attempts have been made to understand the mechanism involved in the swaying of the minarets, the cause of their vibrations remains a mystery.


(Painting from Volume I of 'Scenery, Costumes and Architecture of India', etched by G. Hawkins, engraved by T. Fielding and colored by J. B. Hogarth.)
Posted by Unknown at 11:54:00 AM No comments:

Kailash Temple in Ellora is is the world's largest monolithic structure carved from a single rock.It is noted for its vertical excavation—carvers started at the top of the original rock, and excavated downward. It is nearly one a half times taller than the Parthenon in Athens and occupies almost twice its area. That's not all - it also contains the largest cantilevered rock ceiling in the world. 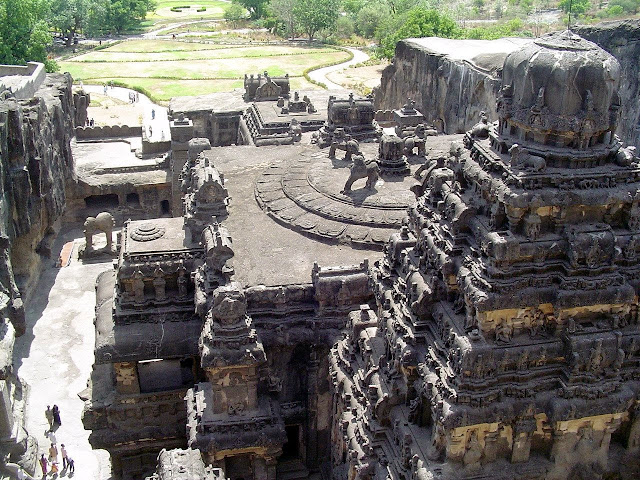 The construction of this temple was sponsored by King Krishna I of the Rashtrakuta dynasty, and took almost a century to complete.It contains several mythical creatures from the Puranas (Hindu text) and entire panels showing scenes from the epics Ramayana and Mahabharata. 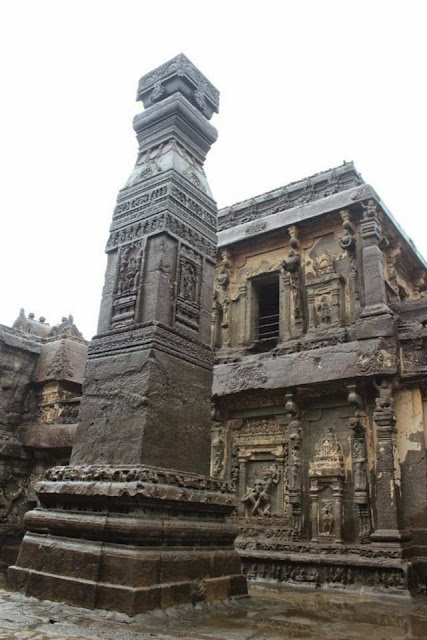 Kailash Temple is a Hindu temple dedicated to Lord Shiva. It has been named after the Kailash mountain, which is the abode of Shiva. 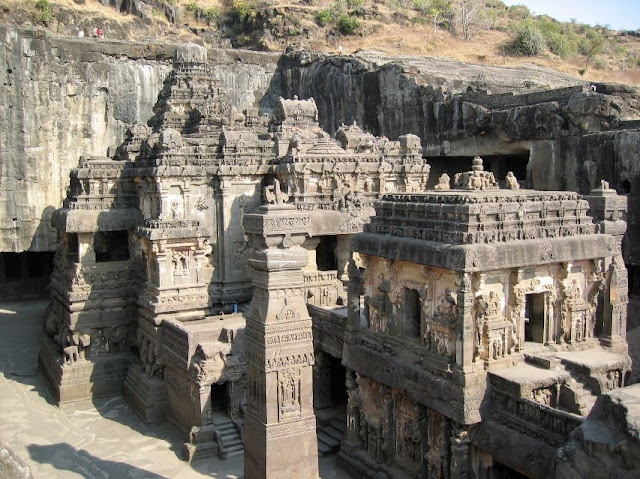 Kailasa temple, according to the UNESCO world heritage site, is remarkable "on account of its striking proportion; elaborate workmanship architectural content and sculptural ornamentation."

On seeing a fakir near Charminar, Hyderabad

I clicked this photo of a man asking for alms near Charminar. Yet, his clothes were not those of a beggar. They were neat and clean, and his demeanour was calm. He seemed unperturbed by all the chaos around him.

I felt that he was not just someone trying to make money from begging. He was probably a fakir in the original sense of the word.

The term fakir has its roots in the Arabic word faqr which means poverty. A fakir is one who is required to renounce all worldly riches and ties; and is required to live by seeking alms. A true fakir rejects the trappings of the world in exchange for spiritual riches. 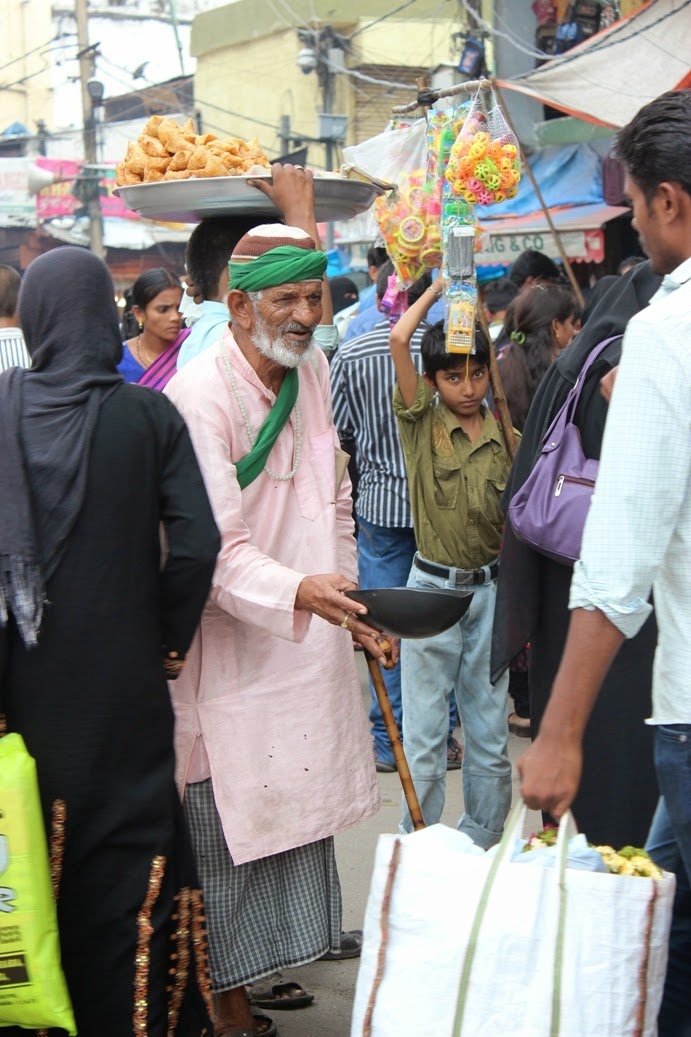 In India, fakirs usually follow the Sufi spiritual path. They trace their roots to one of the many Sufi orders (tariqah) that were established in India beginning in the 10th century under the Delhi Sultanate. The Sufi tariqahs spread into the Deccan along with the Tughlaq dynasty. Sufi teachings of simplicity, spirituality, love and care for humanity were attractive values that made the common people revere Sufi fakirs. They were often credited with miraculous powers.

While many fakirs are wandering mendicants, others have specific khanqah or establishments which are centres of Sufi gathering and discourse. At the khanqah, the master (sheikh) and his disciples would read scriptures together, engage in debate and discussion, and offer blessings and assistance to all who came for help. Khanqah's also had free kitchens, where food was provided to all who asked. Through service to the poor, combined with personal austerity, Sufi fakirs established strong credentials and were responsible for the spread of Islam in India.
Posted by Deepa at 2:54:00 PM No comments:

The works of Charles Forrest 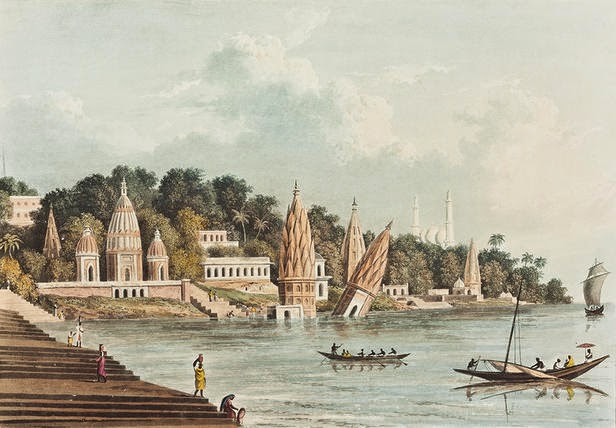 The painting above is one of 24 illustrations in a book called "Picuresque Tour along the Riverrs Ganges and Jumna in India". It was published in London. 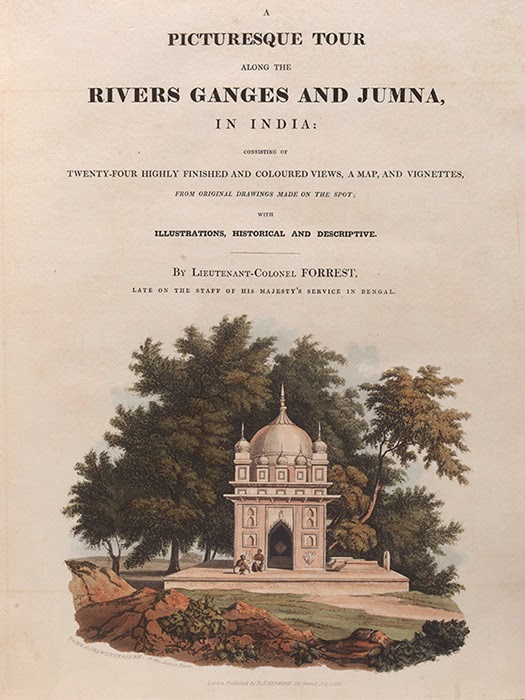 Like many Englishmen and women,  Forrest was enamored of India and its romantic landscapes. He was based in Calcutta, and whenever his regiment was sent upcountry, he would make excursions from the camp on horseback, palanquin or boat, to capture images. He drew sketches of what he saw, and then later coloured them. The image below is of Barrackpore, which was the earliest cantonment town in India: 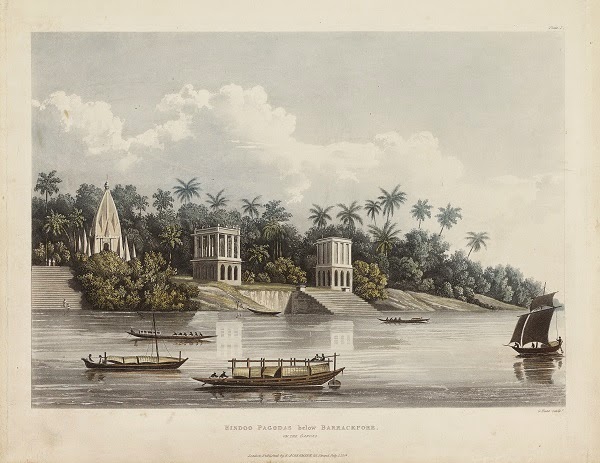 Forrest drew unfamiliar vegetation, animals, palaces, forts, temples and other landscapes. He drew not only grand monuments but also smaller places. Along with other artists like Daniells and Salt, Forrest was responsible for creating exotic images of India in the public imagination.
Posted by Deepa at 11:09:00 AM No comments:

There are four doors in the Pitam Niwas courtyard at the City Palace, each of which is a work of art.

The most famous of them is the Peacock Door, dedicated to Vishnu.
Here's a closer look at the carved peacocks above the door:
The other doors are also beautiful: this one is called the Lotus Gate and is dedicated to Shiva and Parvati.
My favourite is the Green Gate, dedicated to Ganesh: it is not as ornate as the others but the colour and graded texture created by shades of green is just wow.
And here is the last one, the Rose Gate dedicated to the Goddess:
Each one is a gem, don't you think?
Posted by Deepa at 9:52:00 PM 2 comments:

We had a wonderful trip to Kabini this week, with sightings of several animals and birds by the river.

Summer is usually the perfect time to see the gathering of elephants by the river bank. Usually as the river dries up, the green grass emerges from dormant seeds, providing nourishment to elephants.  Apart from this, there are dense clumps of Giant Bamboo grass along the river bank, which also the elephants love to eat.

But right now, the bamboo is dead. This type of bamboo flowers once in three decades or so, and yields bamboo rice (very expensive, nearly Rs 2000 per kg). After the flowering, the bamboo dies. You can see the dead thickets of Giant Bamboo in the photo below (on the left). With the bamboo gone, the Kabini riverbank cannot support big herds of elephants. So the matriarchs have taken their herds to other parts of the forest. Only some individuals remain, especially solitary tuskers. We had some excellent individual sightings.

Here is a closer look at the two elephants in the photo above. The older one is definitely female, but I cannot tell whether the young one is male or female. It is possibly a mother and child. The mother has decided to remain by the Kabini riverbank for the moment. Perhaps she will migrate elsewhere later in summer. 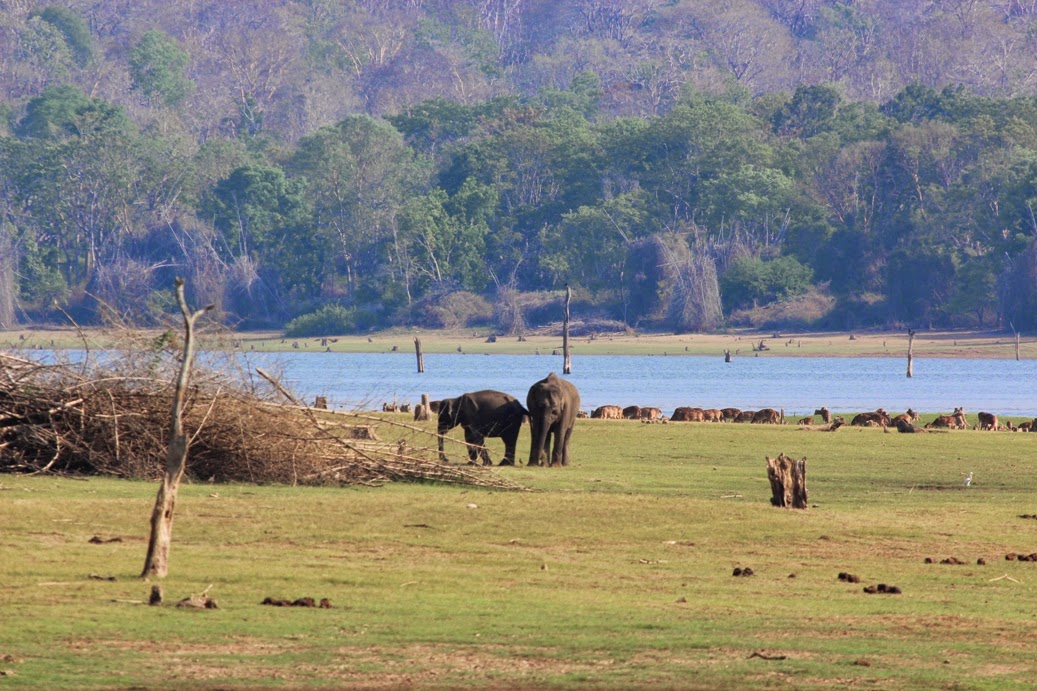 Here is another tusker that we saw. He is also busy eating the green grass. He is surrounded by groups of jungle mynahs. When he feeds, he disturbs little insects in the grass, which the mynahs love to eat. 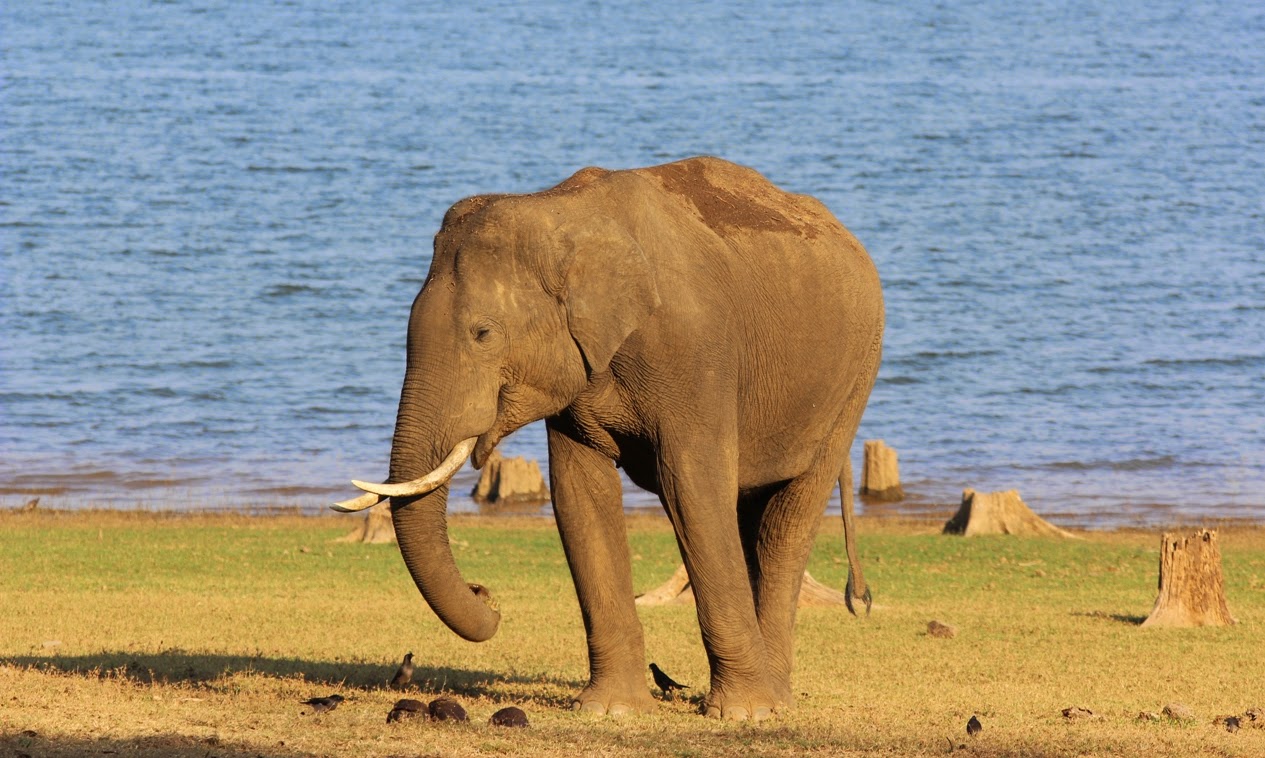 We drove into another part of the park and were rewarded by a unique encounter with a tusker in musth. He is the Ganesha of Kabini, with one tusk :) Check out his ears, and compare them with the tusker in the previous photo. These pink edged ears are a sign of age. This is a much older elephant, compared to the one in the previous photo. He was in musth (you can see the secretion from the glands on his temples). He probably lost one tusk in a fight with another elephant. He was moving quite rapidly, and when we left him we saw him reaching up with his trunk to break branches of a tree. 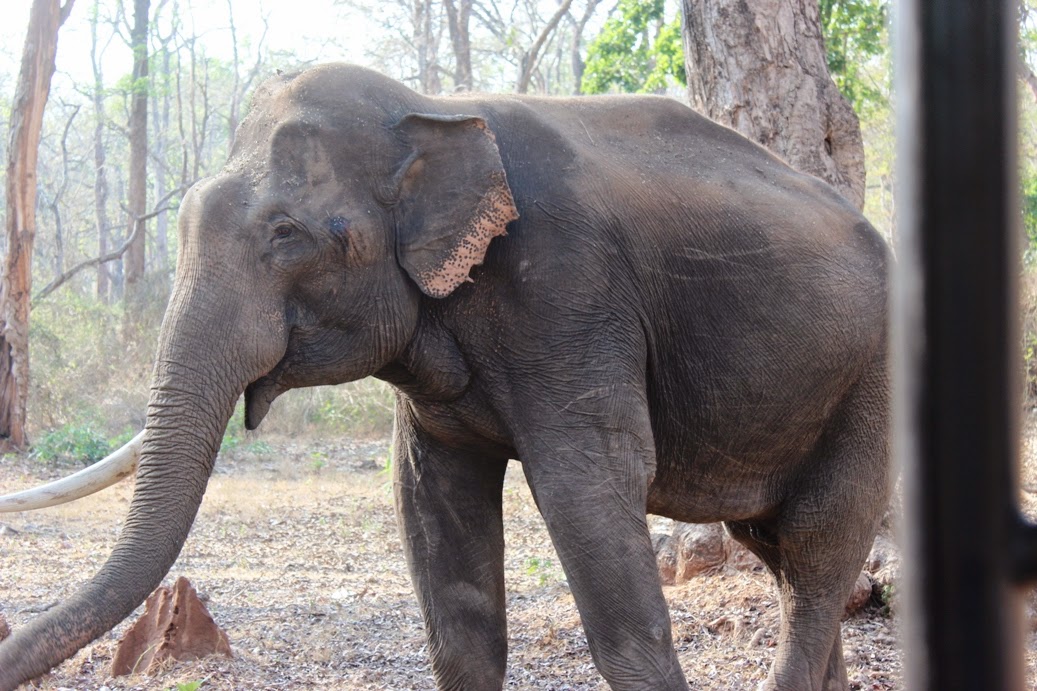 We also saw a very young male elephant, whose tusks were just beginning to emerge. He was grazing by the side of the road, but vanished into the forest when he spotted us. He must have been kicked out of the bigger herd and was now beginning his life as a solitary male. 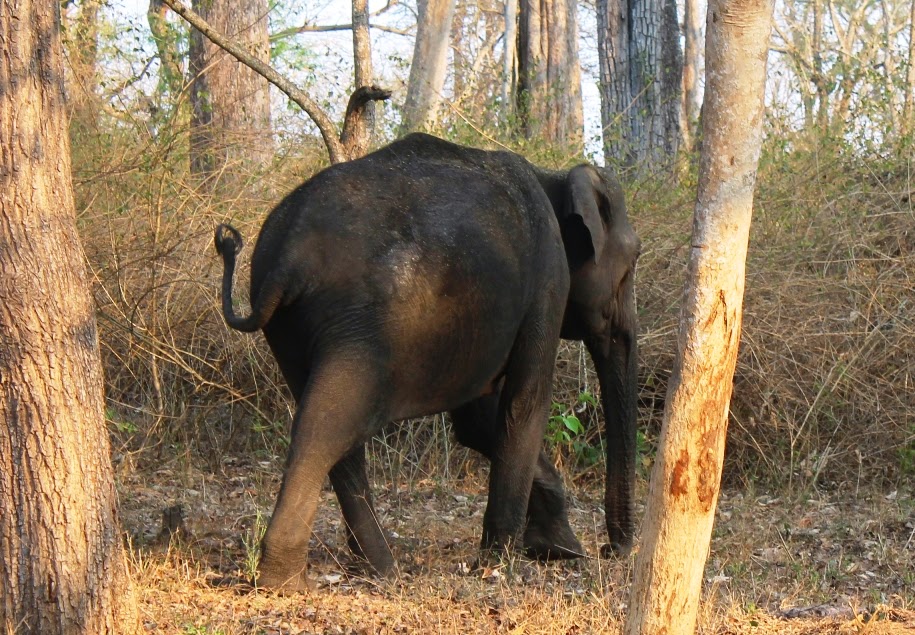 On our safari, we also stopped at the forest department's elephant camp, where we saw Arjuna, the impressive elephant who heads the Dussera procession of the Maharajah of Mysore. I felt rather sorry for him, frankly. 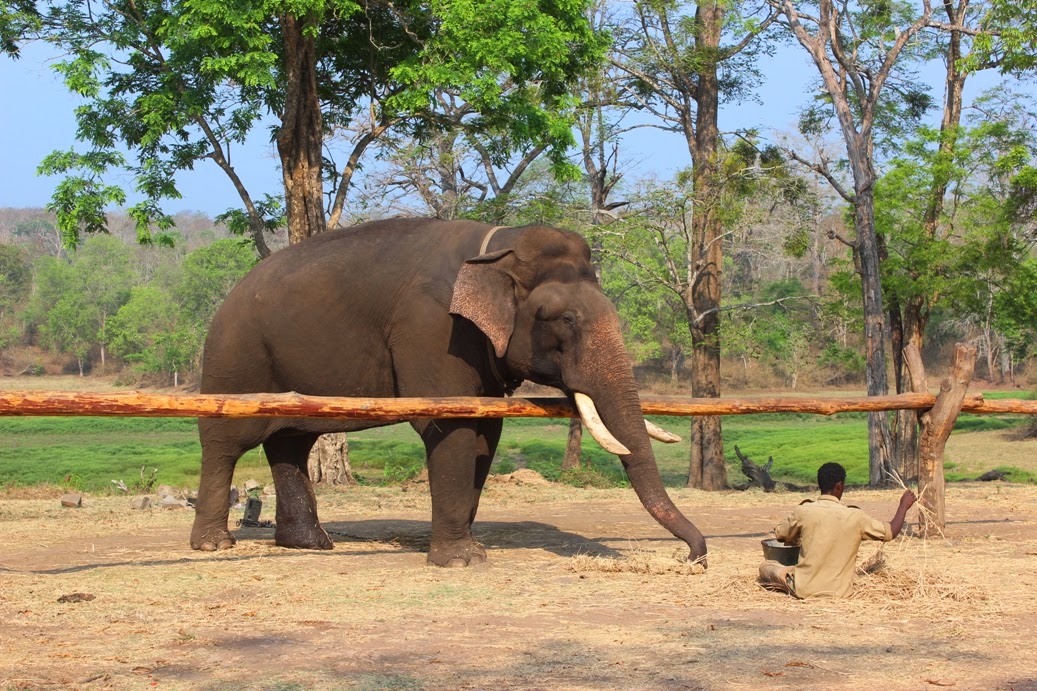 Apart from elephants we saw many other creatures big and small. We had a magnificent but short sighting of a leopard, which was the highlight of the trip. I enjoyed seeing the Giant Malabar Squirrel, which I had not spotted before. The langur-chital groupings were fun to see. The birding was also good. In fact, I enjoyed everything about Kabini, and think it is a wonderful place to visit in summer.
Posted by Deepa at 11:56:00 AM No comments: