Garuda Purana and the democratization of knowledge production

The Garuda Purana, composed in Sanskrit, contains 16000 verses, dealing with an incredibly diverse collection of topics.

It also includes statecraft and more practical matters such as charity and gift making, economy, thrift, duties of a king, politics, state officials and their roles, and how to appoint officials. Lastly, it also covers personal development and self awareness through Sankhya and Advaita Yoga.

The text is attributed to the legendary sage Vyasa, in the absence of clear authorship. It is believed to have been first composed at least a thousand years ago, with the core being even older. The versions that survive today contain different lengths and different sets of scriptures, pointing to diverse authorship over time as it gained popularity.

One of India's unique features is the way in which many of our scriptures co-opt and include multiple authors. Imagine a book, with many chapters by different writers, all of whom help to grow the book continuously over centuries. As it spreads, more chapters appear, more commentaries and discussions take place, and diverse versions grow and become popular in different parts of the land. The closest parallel is a river, with a single origin but which branches into thousands of tributaries, ending in many lakes and ponds, and watering many fertile lands as it goes along. One could also draw a parallel to the way the internet functions, democratizing the production and dissemination of knowledge. In the case of scriptures, the dissemination takes place in thousands of sabhas and temples, where readings and recitations bring different versions to the people. Confusing? Yes. That is the nature of a cooperative effort at knowledge production. But it is also very appealing, that there is no "one book", no single authority.

The problem with ordering curry leaves online is that you have more leaves than you know what to do with. Meenakshi Ammal came to my rescue with "Cook and See" (Samaithu Paar), the go-to recipe book for all Tamil kitchens. 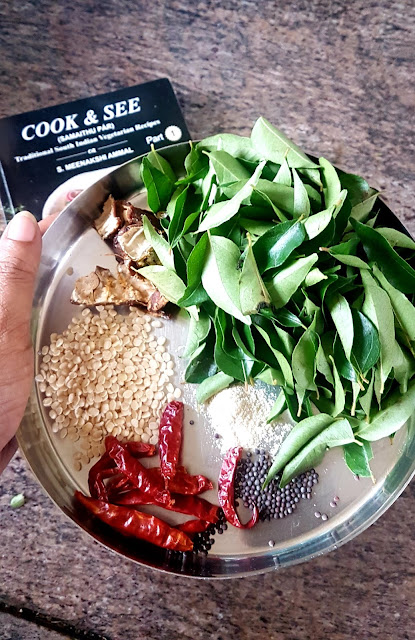 I made Karuveppalai Thuvaiyal, a thick coarsely ground chutney of curry leaves, tamarind, red chillies, urad dal, mustard and asafoetida. Curry leaves pack a wallop in terms of nutrition. They contain calcium, phosphorous, irons and vitamins (C, A, B, E). But the damn thing can be bitter, so Meenakshi Ammal advises using tender leaves and enough spices to offset it. The asafoetida, tamarind and mustard give it a kick, the red chillies and salt give it bite. I didn't have tender leaves, so I cheated and added a teeny bit of sugar. Shhhhh. No one will know! 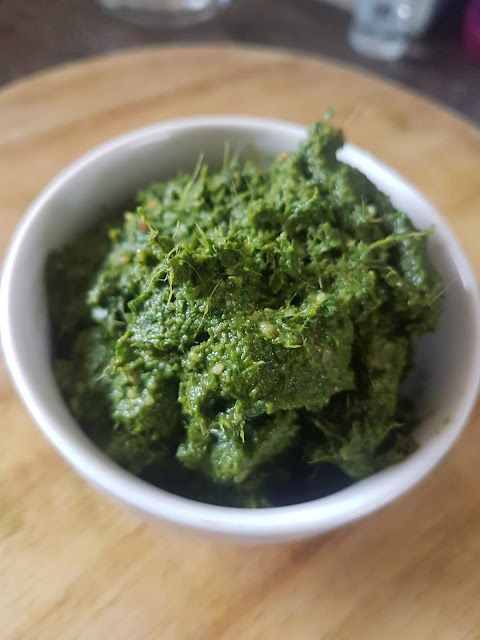 Pro tip: grind masalas coarsely and then add the leaves to grinder. This one works best if ground by hand on a stone, the old fashioned way. The mixer doesn't quite help with the sort of coarse consistency you want. I ended up doubling the urad dal because I wanted more of that lentil feel. I also added sugar like I said, and a twist of lime because I thought the tamarind was not tamarindy enough.

If you'd like to learn how to make a range of pickles, preserves and chutneys, we have workshops in Mumbai, Bangalore  and Chennai.
Posted by Deepa at 9:49:00 AM No comments: Links to this post