Lullaby worthy of a Kerala king.

How can a lullaby be deign to be worthy of a king? When it is composed especially for them, of course.
This was the case the king of Travancore, Swati Thirunal.


The king was considered a good omen even before his birth, with good reason. At the time, under the Doctrine of Lapse, if the king died without a male heir, the kingdom would be annexed by the East India company.
Such was the relief in the royal family that the unborn child was anointed king (they didn't know it would surely be a boy).

When the child was born, the Queen requested the composer Irayimman Thampi to compose a lullaby for him. And a beautiful creation was formed.

Sung by KS Chitra (the video has English subtitles), the highlight of the song is that it leaves the plea 'go to sleep' silent. It merely plays soothingly and the baby gets the point.


Coincidentally, Swati Thirunal was a key figure behind the revival of music and art, geographic divides did not matter to him. Fluent in ten languages, he is credited with more than 400 compositions in Carnatic and Hindustani music.

We are told that the child's talents may be created and honed in the womb. Hearing this song, it is easy to agree.

It was evening and the sun was setting among the treetops, when we saw a herd of gaur in Kanha. The density of gaur population in Kanha is quite low (it is a very large park, spread over 940 square kilometers). So this was definitely an unexpected sighting for me. 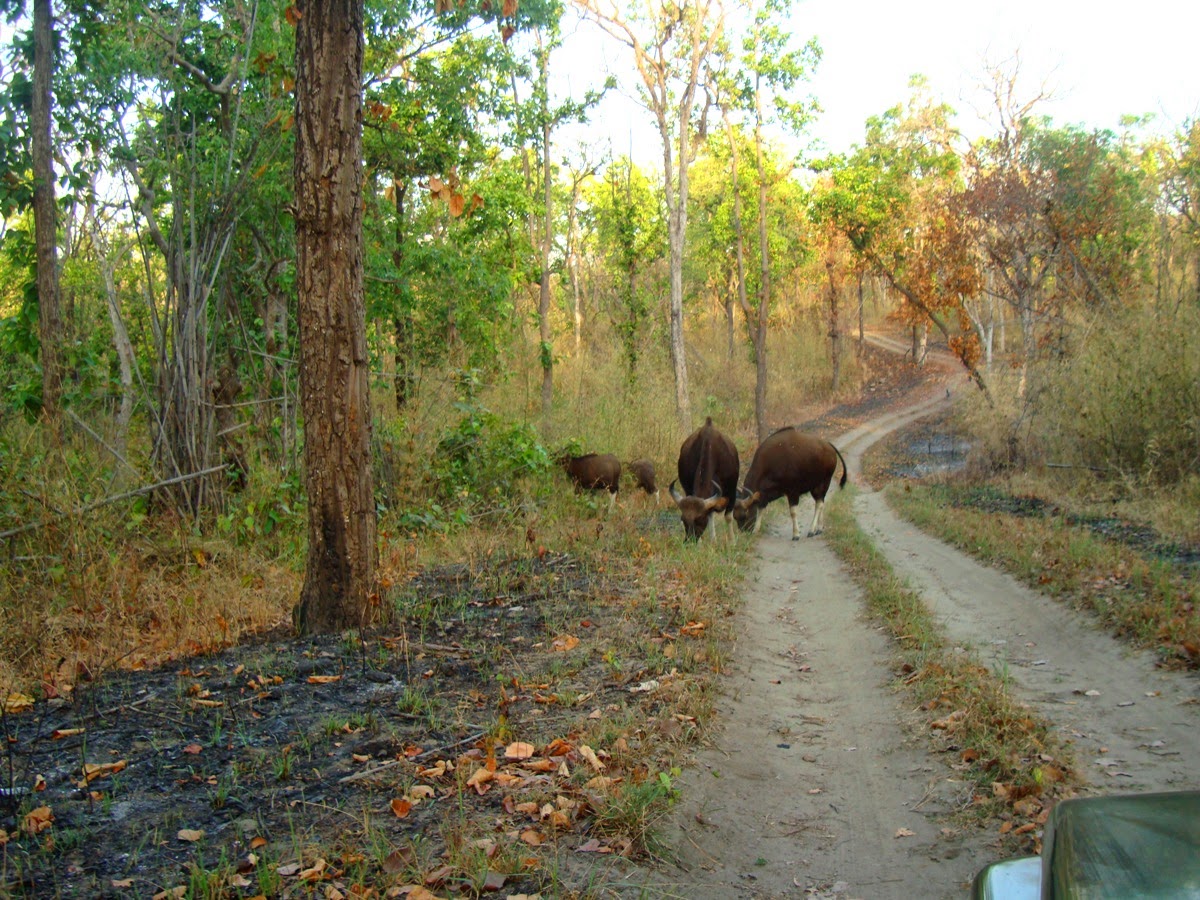 The gaur (Bos gaurus), is the largest bovine in Asia. It is the tallest species of wild cattle and is native to South Asia and Southeast Asia. In India they are usually spotted in south Indian forests; so that's another reason why I didn't really expect to see them in Kanha.

The herd emerged from the bush, and started to graze on the edges of the road. This effectively blocked our road access and we had to wait for a while, until they left the road. So I had a good chance to look at them. There were perhaps 5 or 6 gaur, of which we could see clearly two females and their young. The gaur typically live in maternal herds, led by a matriarch. The herd has juveniles and calves, and during the breeding season (April-May) the herd also has males. Even after the breeding season, the herd may have a large male.


I looked for the largest gaur in the herd - it was a big dark brown one. I was trying to figure out if it was male or female.  Females remain brown all their lives, while males darken and become black as they grow past 5 years. I figured this must be a female, and possibly she was the leader for this herd. (See this great article for information on how to tell the age and gender of gaur). Female horns point inwards and are more closely set, male horns grow out wide and then curve up. 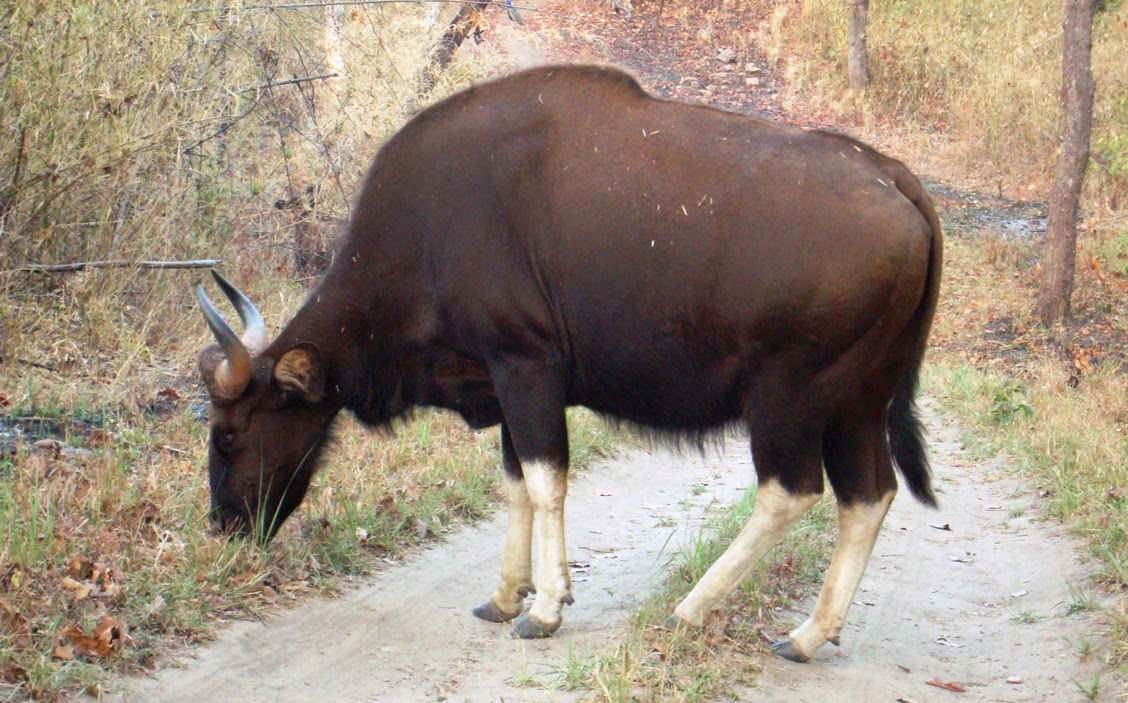 The horns of both males and females start to whiten as they get older. This female has 40% or so white, so she must be around 4 yrs old.

The gaur prefers green grass when available. We could see this family grazing on whatever green grass they could find. When green grass is not available, they eat leaves, buds, shoots and even tree bark. They like bamboo quite a bit. They eat for most of the day, nearly 15 hours or so. After a few minutes, the herd spotted us and I think the young calves got a little alarmed (see photo below). I realised that the gaur in Kanha are not really used to humans and vehicles. Within a few seconds, they all crashed away into the bushes. 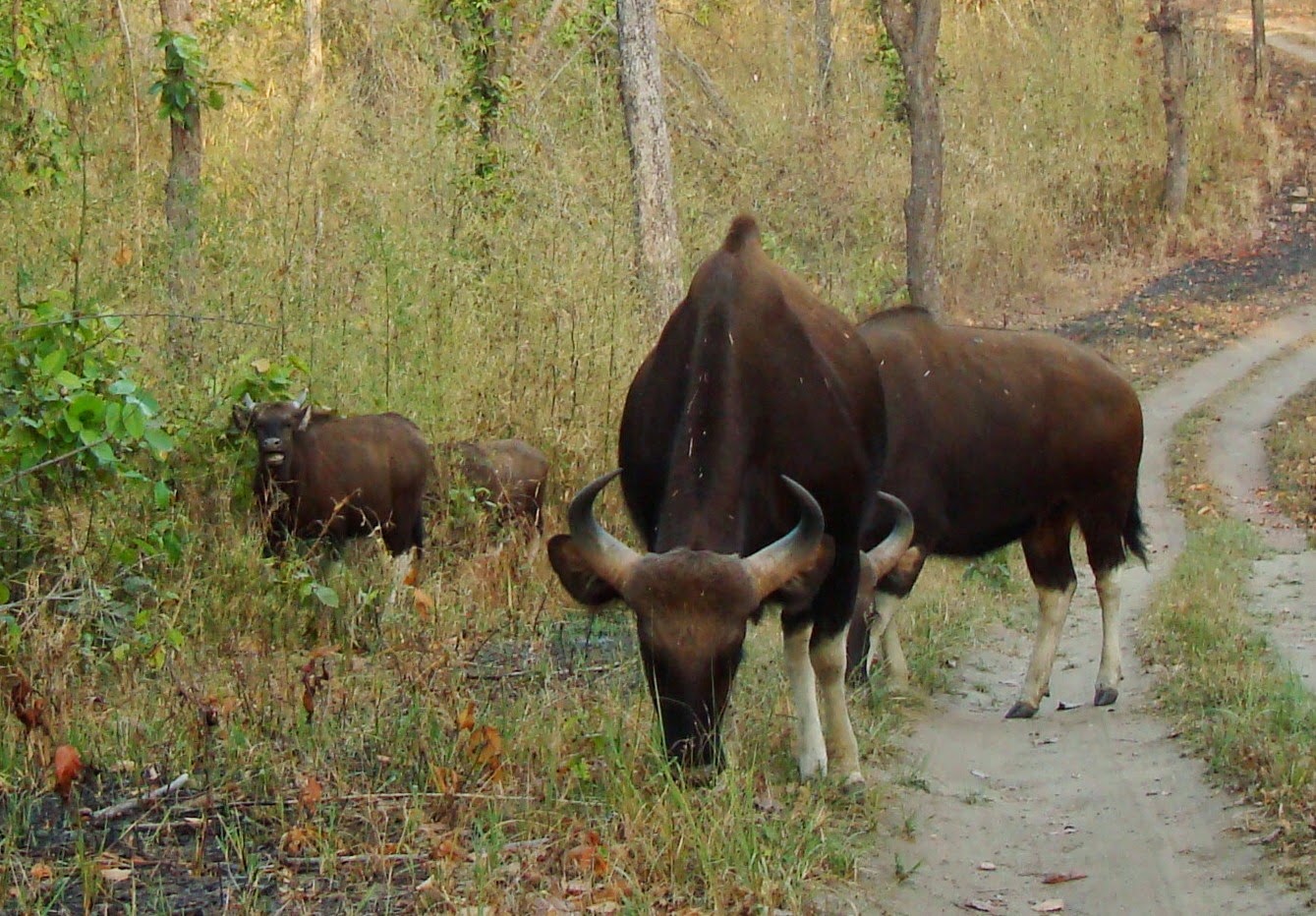 As we drove past the area where they were standing, suddenly a female gaur came back again, out of the bushes. She stood there staring straight at us. It's as if she was saying, I'm not scared of *you*! I remembered that the gaur is a pretty dauntless creature, and will even face down a tiger. 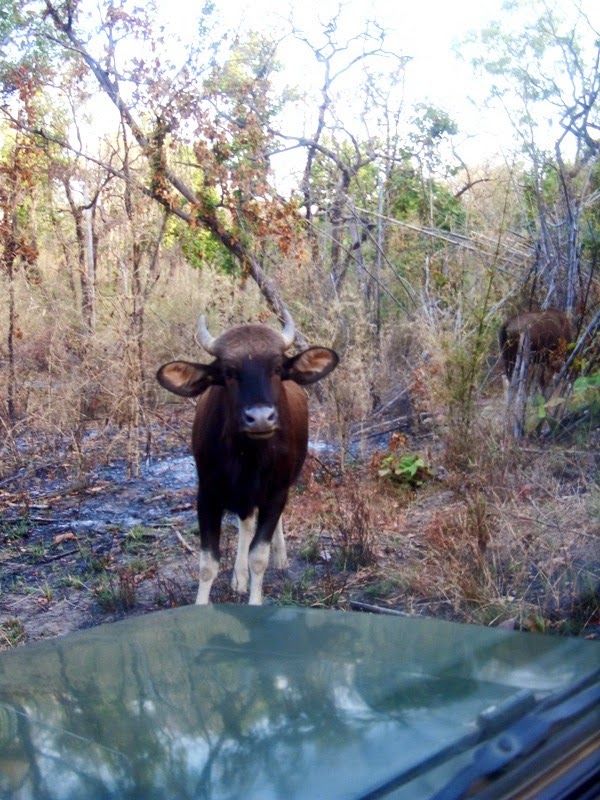 In 2011, the forest department relocated some gaur from Kanha to Bandhavgarh (where they had gone extinct around 1996). A total of 19 gaur were translocated in the first phase. A couple of them were killed by tigers but the rest are doing well. Later another 31 gaur were translocated, and they have also managed to survive very well in tiger territory. In fact,  Bandhavgarh now has some 70+ gaurs (there have been several births and the gaur population is thriving). The belief is that gaur do well when their herds are in significant numbers. In the wild, you can see gaur in herds ranging from 2 to 20 individuals. But the smaller units have less ability to protect their calves and juveniles from tigers.


Here's another gaur we saw, in a different part of Kanha. This one is a male (I'm guessing!), based on the shape of the horns. They are broader, they sort of shape outwards and then up. And the center of his head is more pronounced. He is still not very black, and his horns are small, so I would say, not more than 2.5 years old. 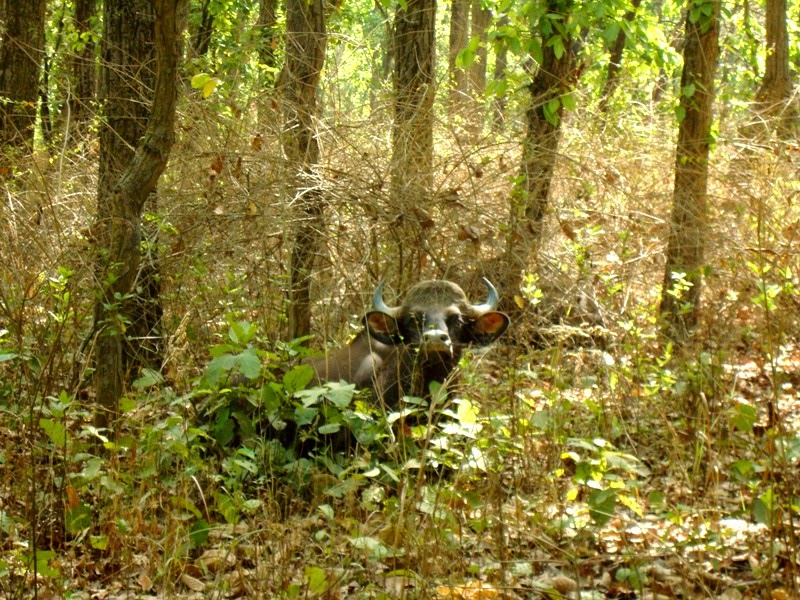 If you go to Kanha, do ask your guide if you are in gaur territory. I think (if i remember right) they frequent only some parts of the park.
Posted by Deepa at 11:41:00 PM No comments: