Chameli Farsh at the Taj Mahal

The Chameli Farsh, or the 'Jasmine Carpet' has floral marble designs set in red sandstone. Although it is visible all around the Taj, you should get to the Tahkhana, to really enjoy the effect. 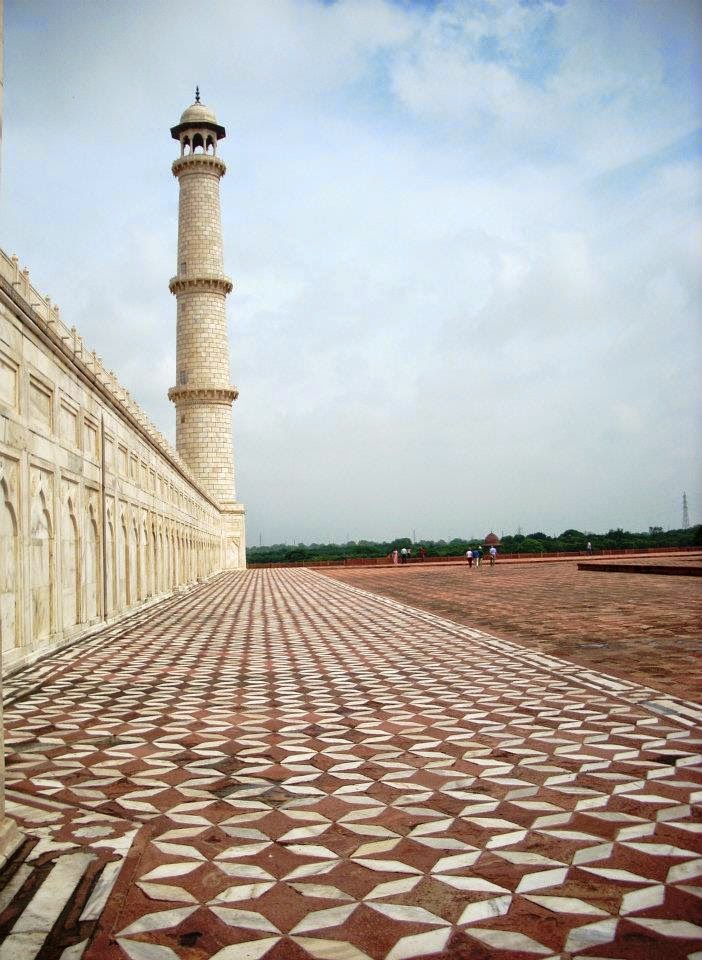 The Tahkhana is an elevation on the northern side of the Taj, where it faces the river Yamuna. The flooring, like the rest of the Chameli Farsh is clad in red sandstone and framed with marble inlay. Tahkhana also has a series of arches that open up into a gallery of rooms, that are connected by a narrow corridor. Unfortunately the inside of these rooms is now closed off.


The Chameli farsh has a slight incline, towards this river, and according to some historians this may be increasing. Though this is an inevitable consequence of constructing a building of this size, it also raises some concerns about the stability of Taj in the future.
Posted by Unknown at 5:49:00 PM 1 comment:


The Chausatti Ghat at Varanasi is named after the Chausat Yoginis, the 64 sacred feminine beings who are representations of Shakti, the primordial cosmic energy. The word chausatt means 64 in Hindi. According to popular legend, the Chausatt Yoginis were sent by Shiva to reside in Varanasi. 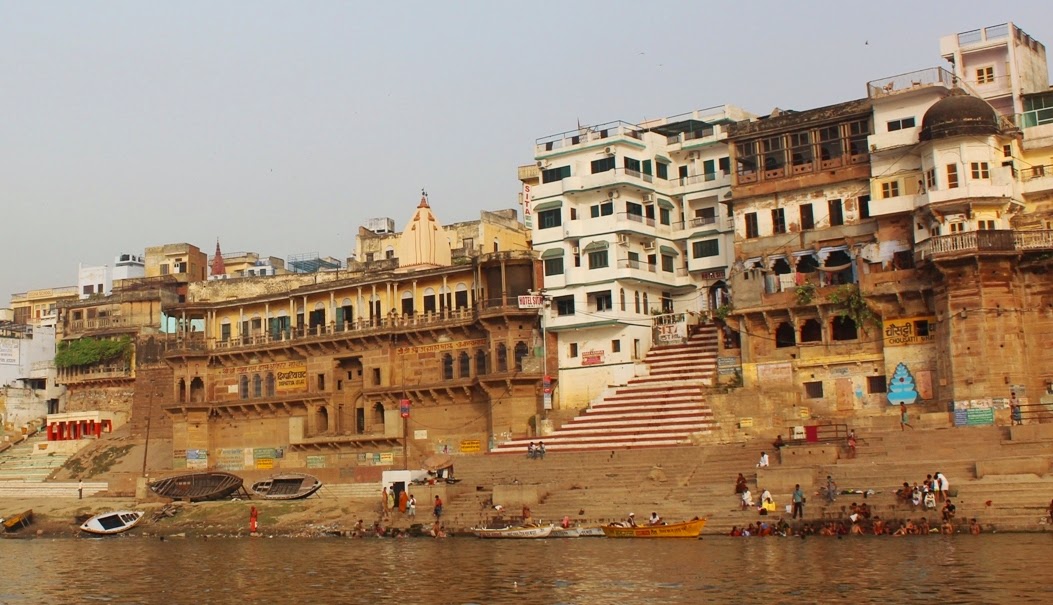 The fourth canto of the Skanda Purana, called Kashi Khanda (which is dated to the 14th Century), mentions the 64 yoginis in Chaussati Ghat. Thus we know that at least since the 14th century, the worship of these goddesses has been practiced in Varanasi. Yogini worship was very popular in India in the 10th and 11th centuries; so it is possible that these goddesses existed in Varanasi even earlier.

In the 16th century, the great Sanskrit philosopher Madhusudana Sarasvati (1540 – 1640) lived at Chausatti Ghat. He is famous for his treatises on advaita philosophy. Madhusudana initiated many sanyasins into the Dashanami orders, in order to form large groups of martially trained ascetics.

King Pratapaditya of Jessore, Bangladesh (1561 - 1611) changed the ghat into a 'pucca' structure in the 16th century. In 1670, the Mewar king Rana Jagat Singh I built the Rana Mahal near the Chausatti Ghat, and the goddess idols were kept there. In 1690, the Udaipur rulers further improved the Chaussati Ghat.

The lower portion of Chausatthi Ghat was re-built in 1830 by the Raja of Digpatia; so that part is now called Digpatia Ghat. You can still see the beautiful architecture of the palace built by the Digpatiya king.

The stone steps lead up to a temple. In the temple compound there are old images of Kali, folk goddesses, Shiva, Ganesha and Kartikeya. Among the 64 Yogini images, only 16 are presently existing in Varanasi. Out of these, only two are in the vicinity of the Chausatti Ghat, i.e. Gajanana, “the elephant-headed” (House: D 21/ 22) and Mayuri, “the peacock-headed”, on the steps of the ghat.

Currently the Sitaramdas Omkarnath Kashi Ashram is located on this ghat. This sect has its headquarters in Calcutta. They welcome people of all faiths and castes. The founder, Sitaramdas Omkarnath, believed that religion is fundamentally the relationship between one's soul and God. Through chanting the Name of God, the mind can be oriented towards god. Thus, the ashram’s activities are designed towards promoting the chant of Hare Ram, Hare Ram, Rama Rama Hare Hare; Hare Krishna, Hare Krishna, Krishna Krishna Hare Hare. You can hear the chant in Sitaramdas Omkarnath’s own voice here: https://www.facebook.com/pages/1008-Sri-Sri-Thakur-Sita-Ram-Das-Omkarnath/284717055452

Chausatti Ghat is also the location of "Satyalok", the home of Lahiri Mayasaya, who is mentioned in the famous book Autobiography of a Yogi by Paramahansa Yogananda. You can read more about Lahiri Mahayasa here: http://www.kriyayogalahiri.com/ His grandson continues to live in Satyalok and teach Kriya Yoga
Posted by Deepa at 9:35:00 PM No comments:

The Kannada language is very old and it is of Dravidian origin. It is believed that there originally existed a Tamil-Kannada proto-language, which split into Tamil and Kannada between 8 to 6 BC.

The photo below is an example of the Kannada Script, from a 6th Century cave-rock carving at Badami, 500 kms northwest of Bangalore.
From what I have read, there seem to be several eras/types in Kannada language: the proto-Kannada tongue which I listed above, then after that ancient Kannada (Halekannada), middle (Nadukannada) and modern Kannada.
Different historians attribute different years to these terms but broadly they all agree that ancient or Halekannada absorbed various vernaculars (various types of Prakrits) as and when Kannada-speaking people came into contact with them. HaleKannada also absorbed Sanskrit influences, including Panini (4 BC) and other non-Panini versions of Sanskrit.

The Kannada language has been constantly evolving due to political changes, as each new dynasty which ruled the area spoke different languages. The Karnataka region as we know it today was under Nandas (5th & 4th century BC, capital in Bihar), then Ashoka (Maurya empire, also from Bihar); then the Satavahanas (capital in Paithan Maharashtra), then briefly the Pallavas of Kanchipuram (Tamil Nadu), then the Western Ganga dyasty (capital in Talakad near Mysore), then Kadambas (North Canara), Rashtrakutas (Gulbarga) and Chalukyas of Badami (6th to 12th century AD).

With all these shifting centres of power (and language) the hale-Kannada language had ample opportunity to absorb many vernacular Prakrits. With the advent of Muslim rule in the Indian continent, and later the formation of the Deccan Sultanates, Arabic words became part of Kannada. With British rule, English words also crept into the language.

As a result of all these changes, modern Kannada is very different from the original proto-Kannada-Tamil.

As for written Kannada, well the script is descended from the Brahmi script (the earliest known record of Brahmi is Ashoka's edicts, 3rd century BC). The Kadambas and Chalukyas used a form of Brahmi. During the hale-Kannada phase, the script underwent many changes especially because of the need to be able to write new loan words from Sanskrit and other Prakrits. By the 13th century, this script had split into two similar but different calligraphic styles, Kannada and Telugu. In the 1800s, the Kannada script that we see today was recorded by British missionaries.
Posted by Unknown at 8:56:00 AM No comments:

The Churning of the Ocean, carving at Meenakshi Temple, Madurai

These carvings are only a small section of the gopuram of the famous Meenakshi Temple in Tamil Nadu. See how richly detailed they are! 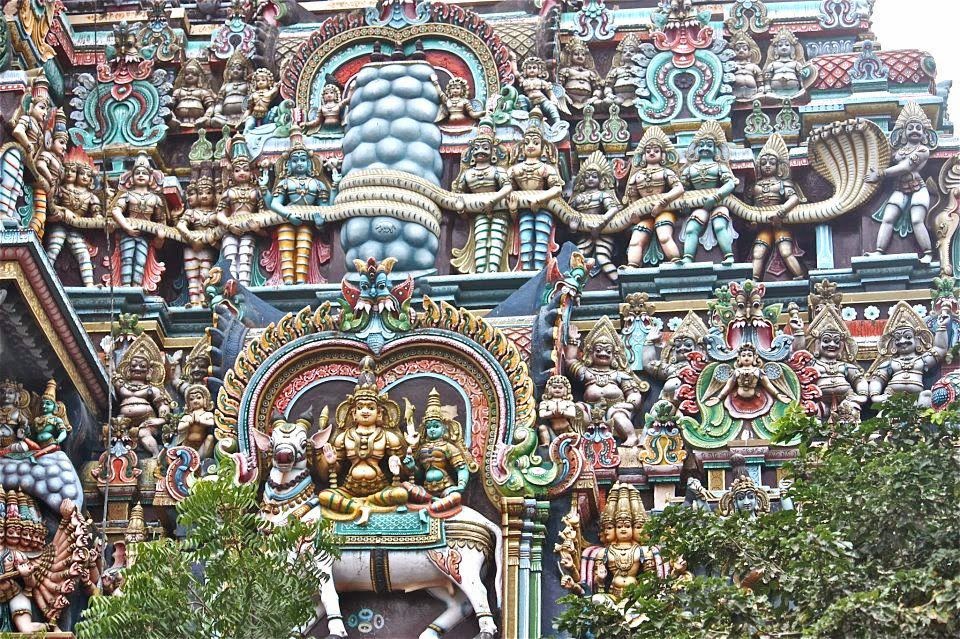 The top panel depicts the Hindu legend of the churning of the Ocean of Milk (paal kadal) and in the lower panel you can see Lord Shiva and his wife Parvati riding their mount, Nandi the bull.


Legend has it that the Gods and the asuras (demons) once began their search for amritam (ambrosia) by churning the Ocean of Milk (the Milky Way galaxy). They used the serpent-king Vasuki, for rope and the mountain Mandara as the churning pole. As the churning continued, either the snake’s head started to spew venom. The Gods fearfully rushed to Lord Shiva asking him to save them. He drank the poison. Fearing for his life, his wife Parvati squeezed his neck to prevent the poison from spreading to the rest of his body. The potent venom turned Shiva’s throat blue, thus giving him his name, Neelakantha (The Blue-Throated One).

The Meenakhshi Temple at Madurai is full of such carvings. At every nook and corner one is likely to find some interesting mythological depiction or reference. What a heaven for a mythology buff!

Photo credit: Vandita Parashar
Posted by Unknown at 8:49:00 AM No comments:

If you’ve ever googled South Indian meals, chances are you’ve come across a photo of the standard ‘banana leaf meal’ laden with rice, curries and a number of other colourful dishes. 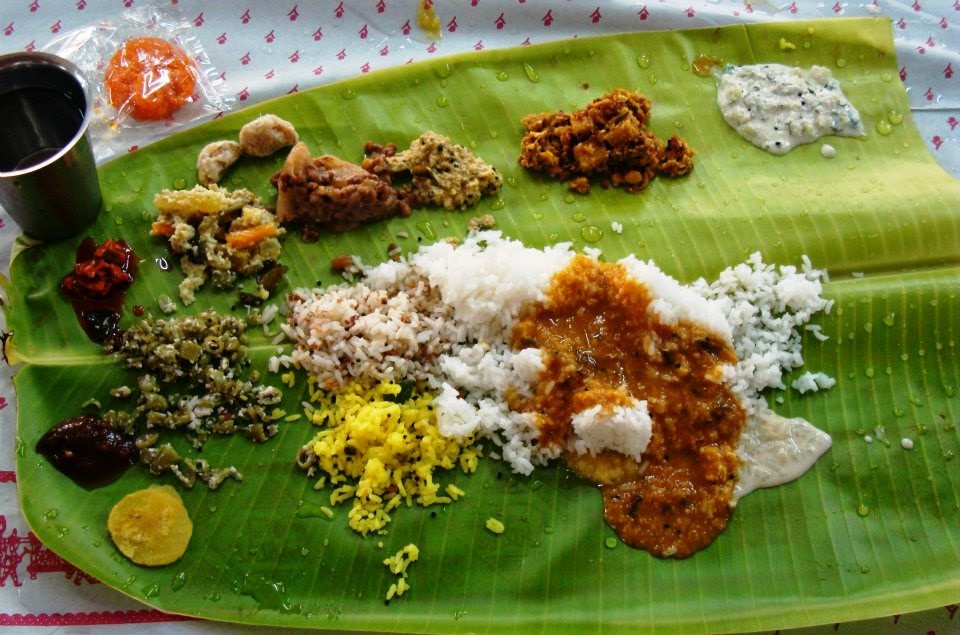 Banana leaves are used as plates all over South India, especially in rural areas. They are available in plenty; because in literally every village household which has a compound, you'll find a couple of banana trees growing.

These leaves are a hygienic and convenient option. One just has to sprinkle some water and wipe the leaf - there is no fear of unclean utensils. Banana leaves are always used at religious ceremonies, such as the wedding meal in the photo above. As you can see, for this kind of feast, you need a large plate! The size of the leaf and its ability to hold so many dishes is very useful!

Here's another photo, from the Sowcarpet area market in Chennai. You can see how the long leaves are converted to plates by expertly slicing them. 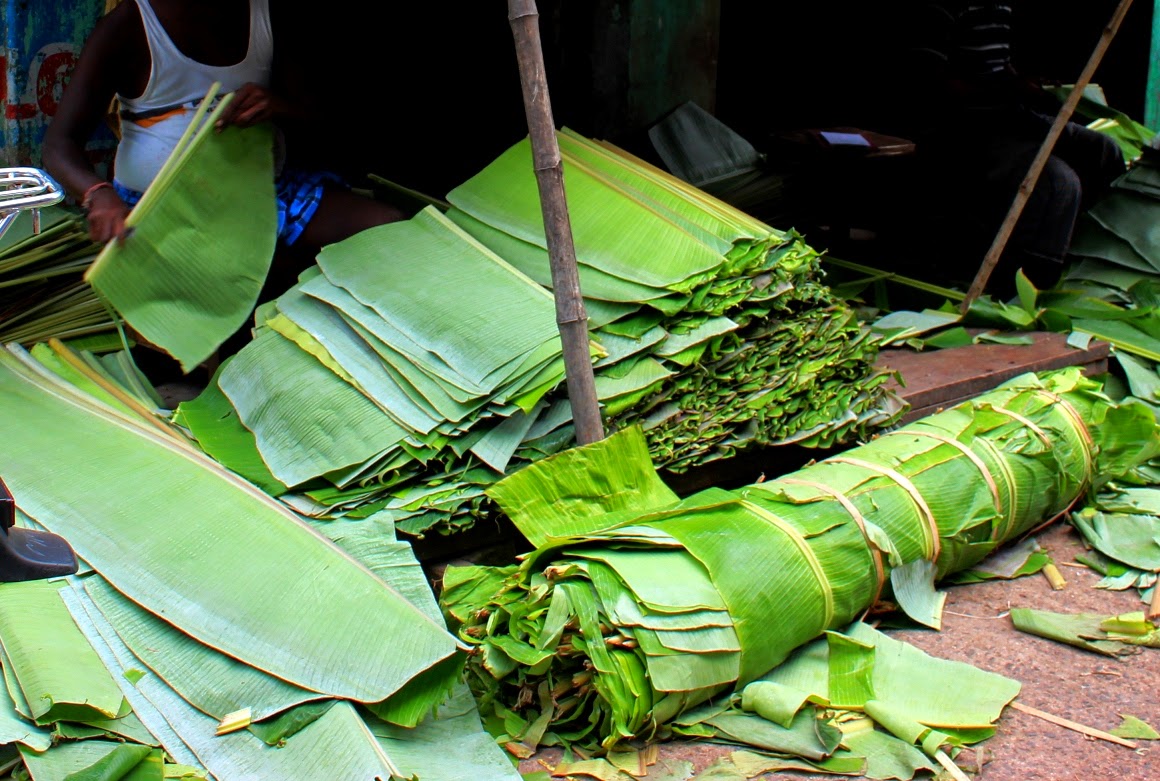 The unused edges are converted into smaller plates, typically used for "tiffin" items. Here's another shop in the same market, selling leaf plates: 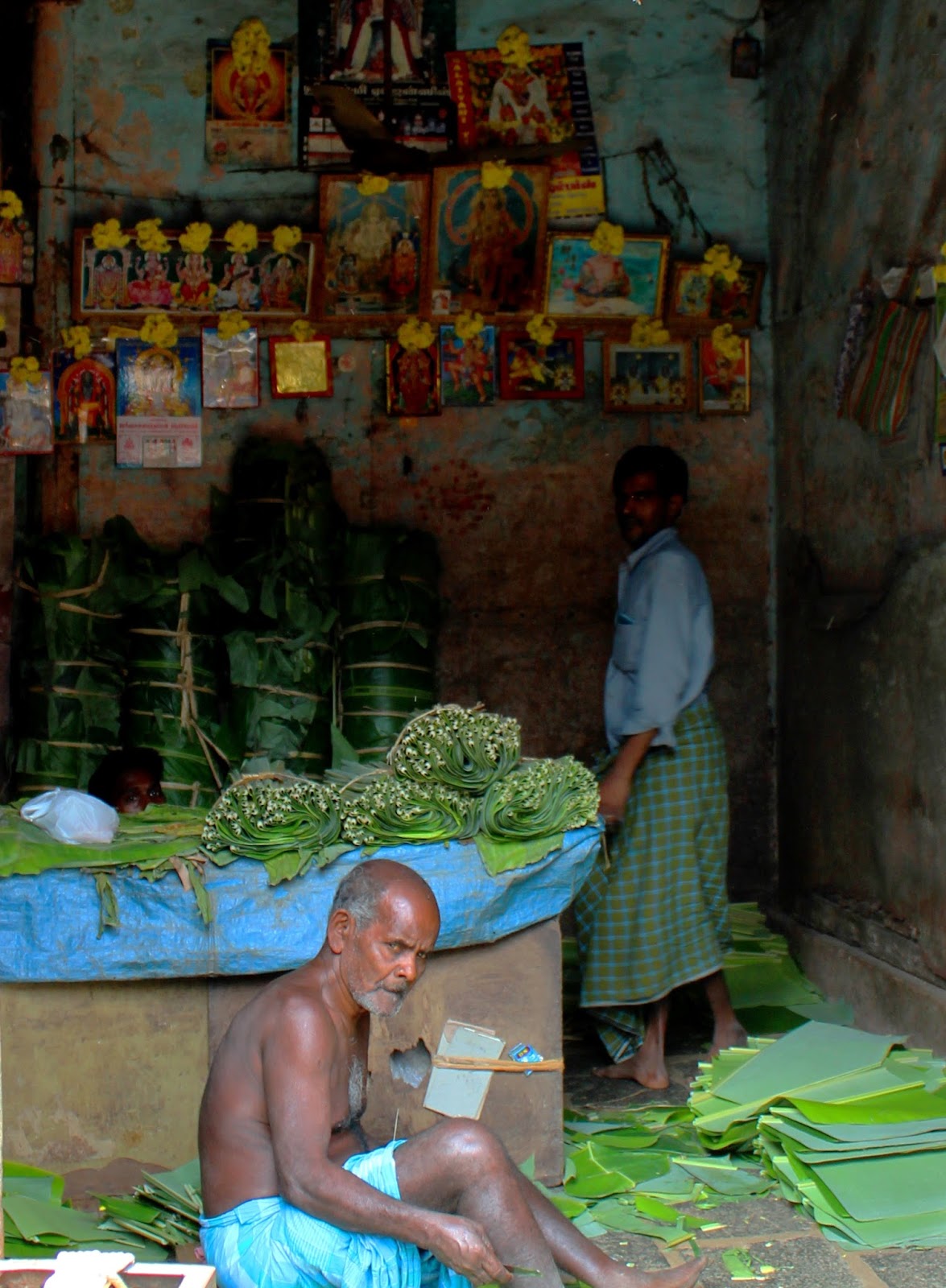 Banana leaves are the preferred wrapping case for carrying food while travelling. Tamarind rice, curd rice, idlis, vadas, dosas, chutney - everything is packed in banana leaves and carried on train and bus journeys. These leaves keep the food from spoiling; they are easy to throw away, and light to carry.

Unfortunately, these ‘green’ plates are fast disappearing from homes and restaurants, and being replaced by metal and plastic.
Posted by Unknown at 11:23:00 AM No comments:

Telegana is the 29th state to be created in India.

Here is the new logo of the state,

3) Lion Capital of Ashoka - from 3BC, four lions facing four directions, I saw the original at the museum at Sarnath, stunning and still shining in polished stone. Now the national emblem of India.

5) Satyameva Jayate in Devnagri script at the bottom - Truth Alone Shall Conquer - from the Mundaka Upanishad. Now the national motto of India.

It's not easy being a king. This is the incomplete tomb of the last Qutb Shahi king, Mirza Nizamuddin Ahmed (who died in 1687 in captivity in Daulatabad Fort). With him, the rule of the Qutb Shahi emperors ended. 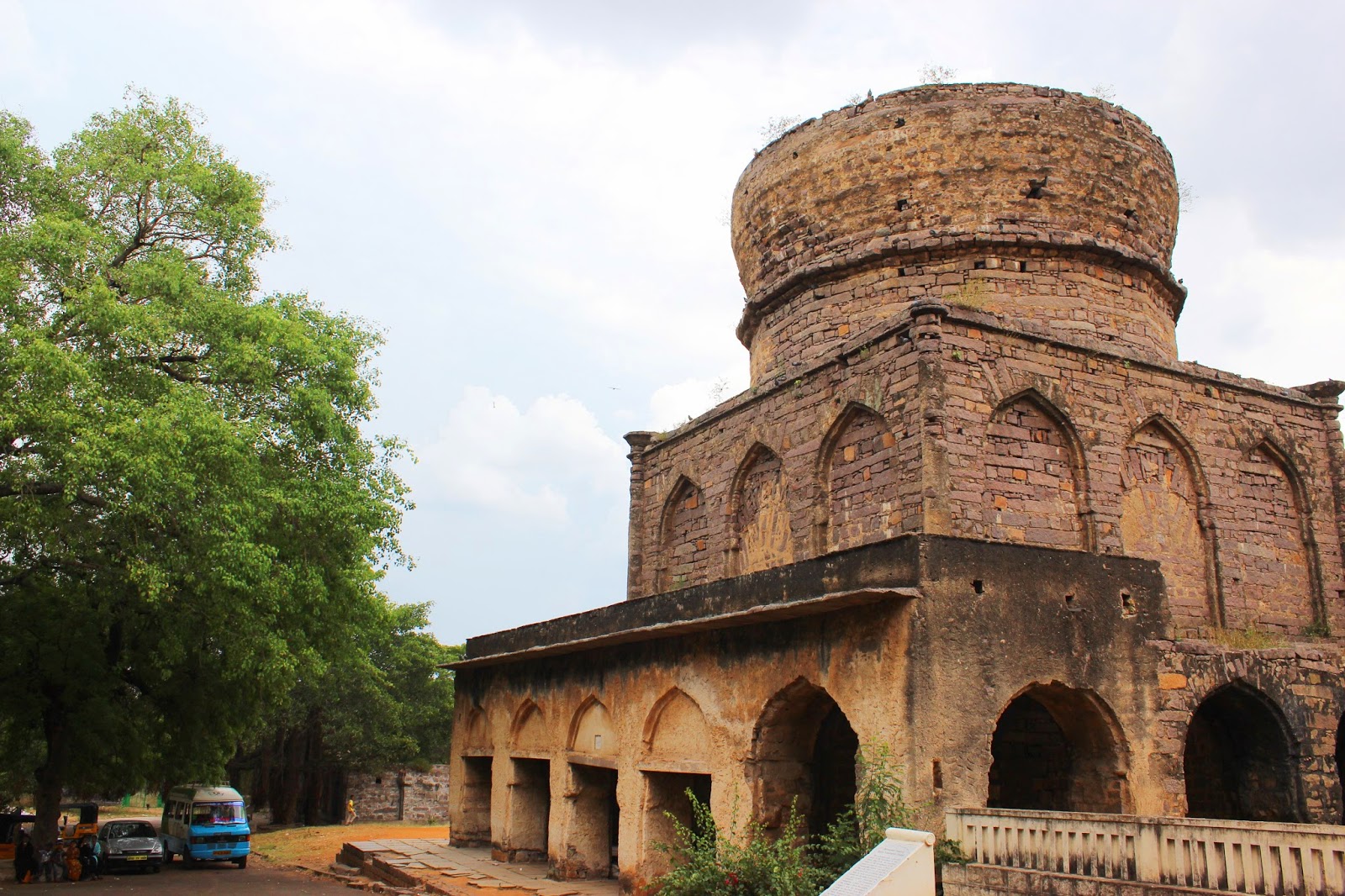 It was a practice among the Qutb Shahis that each king built his own tomb, in preparation ahead. The plans for this tomb ended rudely after an eight-month seige by Aurangazeb. Seeing the tomb reminded me that dizzying heights are also accompanied by dizzying lows. Maybe there is something to said for a life without such pomp and splendour!
Posted by Deepa at 7:20:00 AM No comments: