Moazzam Jahi market is a lovely stone building constructed in 1935. It's known all over Hyderabad as the location of several famous ice cream parlours and their delicious fare.

Of special interest is Bilal Ice Cream Parlour - possibly the most delightful and most interesting ice cream parlour in all of India! Situated inside the market, Bilal is an airy space with elegant arches and high ceilings. The historical mood is deepened and enriched by the black and white photographs, pictures of erstwhile rulers, and elaborate chandeliers that decorate the parlour.

The imposing stone building could have proven to be a very sombre setting for an ice cream parlor - but that has been solved by painting the walls and ceilings in a cheerful red-and-white.

The ice cream parlours in this market serve fresh handmade ice creams. Some of the other well-known parlours in the area are Gafoor, Famous, etc. These are no fuss places with haphazardly placed chairs under a tented structure. These are older joints (Famous will be 60 in a couple of years) while Bilal is relatively new. These parlours are where locals recover from the heat with an ice cream during the day. In the evenings, they are completely packed with families and friends, and close only after 12.

Flavours range from seasonal fruits like mango and chikoo to some uniquely flavours like pista and paan (betel nut). In summer, Bilal offers blessed relief from the heat... I was already contemplating which ice-cream to order next as I ate my first one! 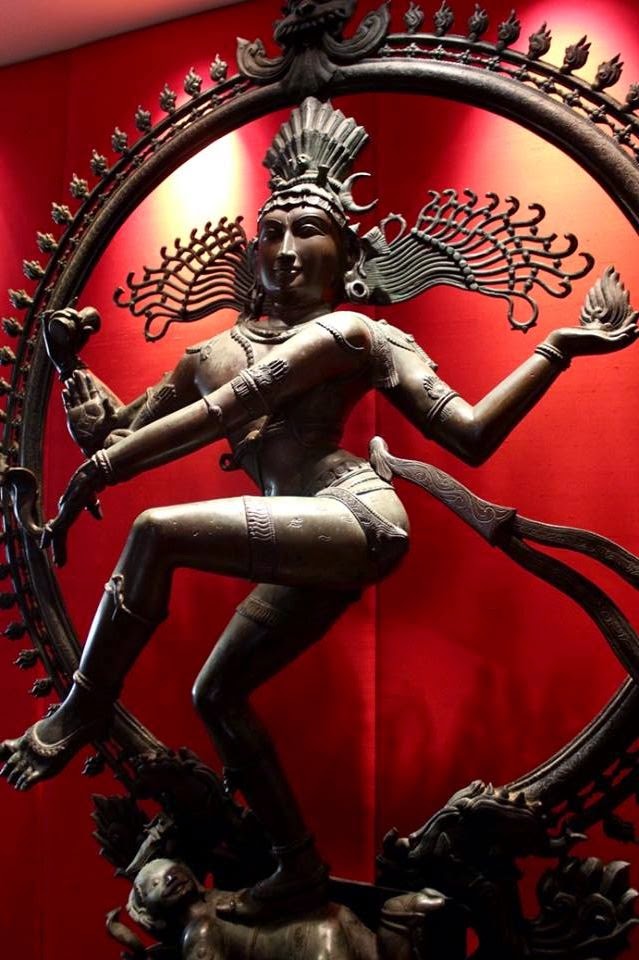 One of the most common sculptures you will see in South India is the bronze representation of Nataraja. But what is this Nataraja? What is its meaning?

"The Hindu religion is the only one of the world's great faiths dedicated to the idea that the Cosmos itself undergoes an immense, indeed an infinite, number of deaths and rebirths... Its cycles run from our ordinary day and night to a day and night of Brahma, 8.64 billion years long..."

"The most elegant and sublime of these is a representation of the creation of the universe at the beginning of each cosmic cycle, a motif known as the cosmic dance of Lord Shiva. The god, called in this manifestation Nataraja, the Dance King. In the upper right hand is a drum whose sound is the sound of creation. In the upper left hand is a tongue of flame, a reminder that the universe, now newly created, with billions of years from now will be utterly destroyed. "

Email ThisBlogThis!Share to TwitterShare to FacebookShare to Pinterest
Labels: Faiths of India

Sherwali Kothi (Sher = Lion, Kothi = Mansion) is a mansion in Thatteri Bazaar. This area is to the north of Chauk. The mansions in this area belong to business families and are used both for residential and business purposes. There is some elaborate wood carving, although the mess of electrical wiring hides some 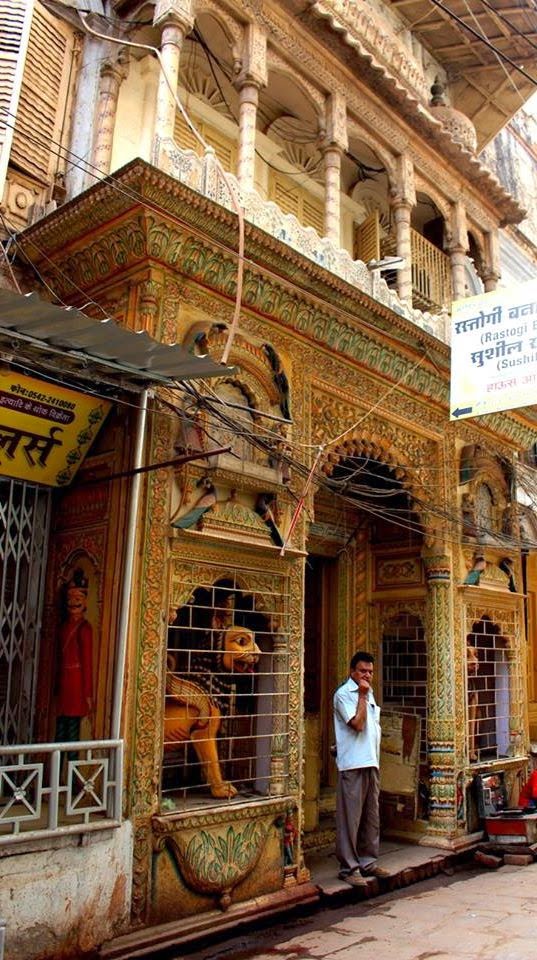 In Sherwali Kothi, two roaring winged lions guard the gate to the haveli. Here is a close-up of one of the lions. 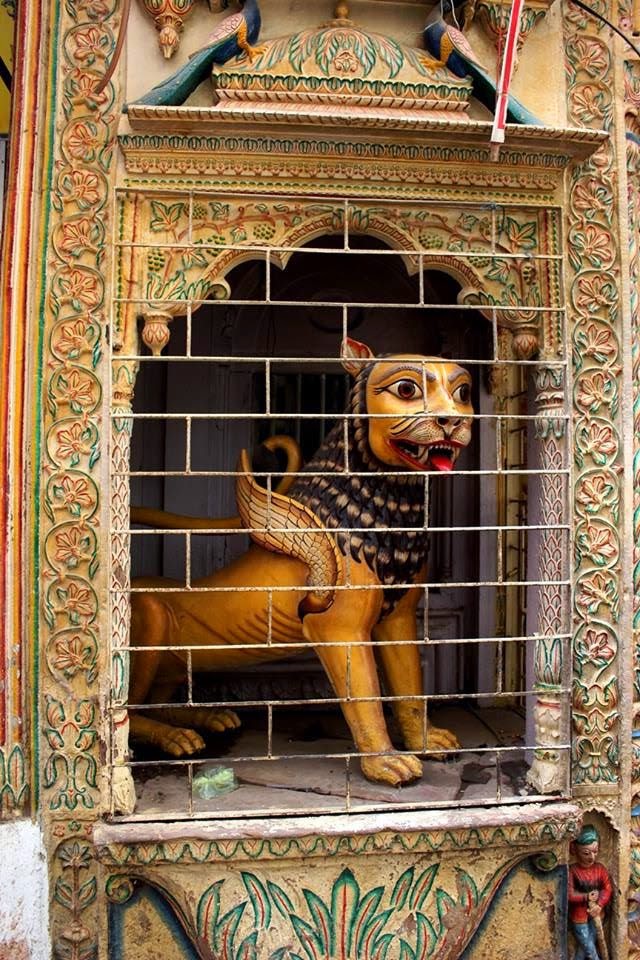 There is a saree shop on the first floor here called Rastogi. Many of the families who lived in this area have moved to the newer parts of the city, and they use this old part for business, but also they have showrooms in modern areas. An armed sentinel stands guard outside the haveli. This sort of representation is done typically by wealthy merchants, to show that this is a rich household. 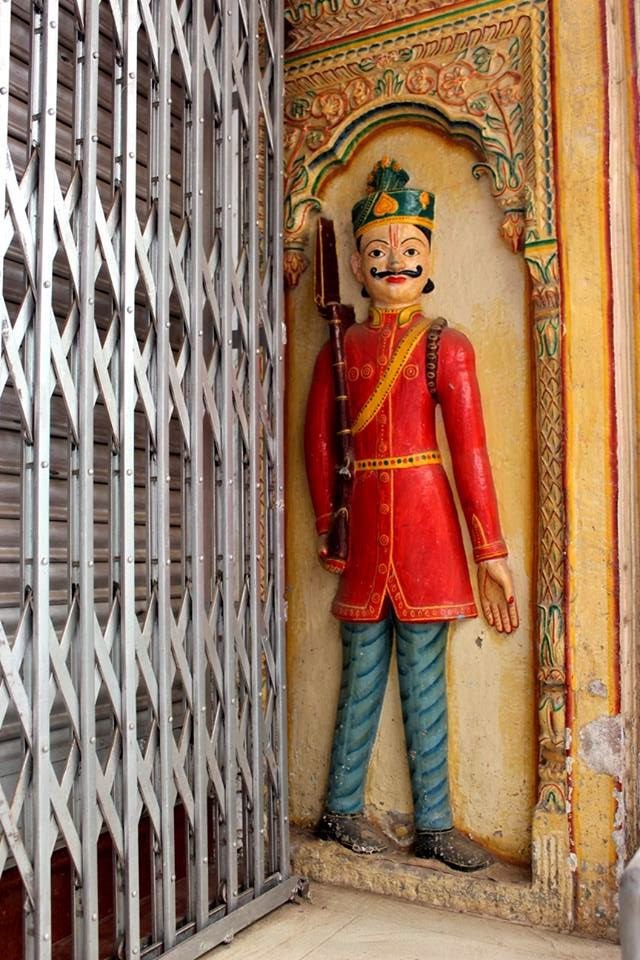 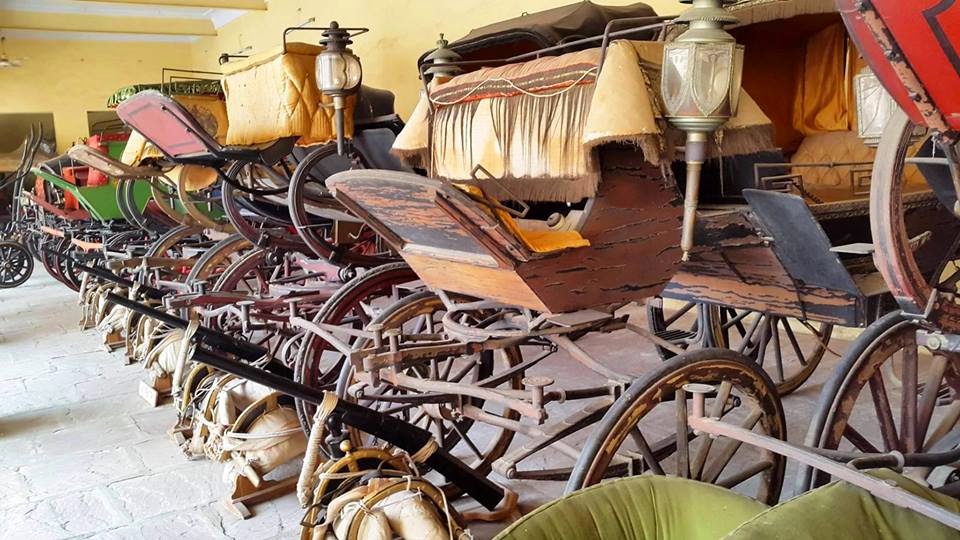 A collection of royal carriages at Jaipur's City Palace
Posted by Deepa at 4:50:00 PM No comments: 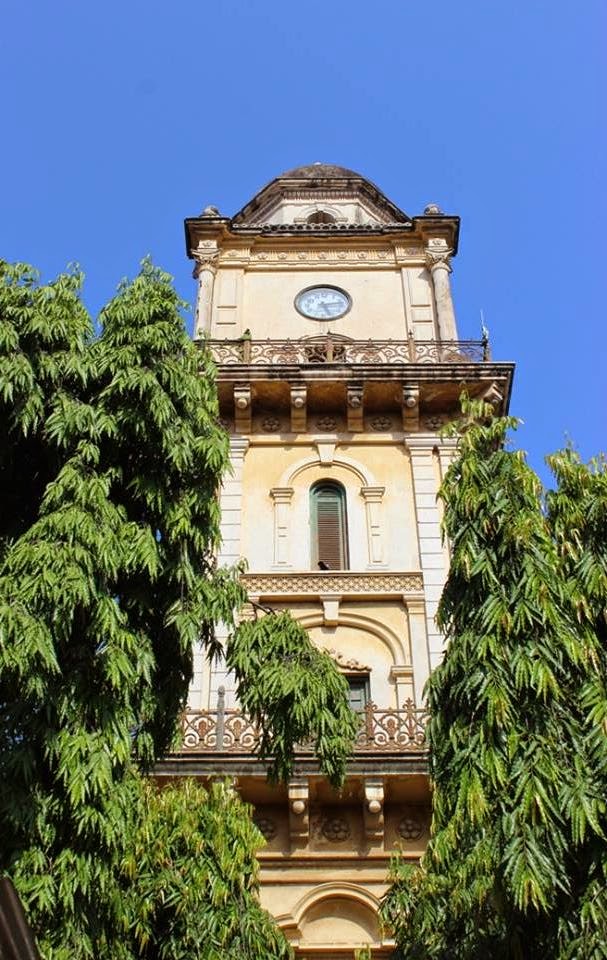 Clock towers were often erected in public areas in 19th century India. Why? Because in those days very few people had their own time-keeping devices. Clocks and watches were expensive. This photo depicts one of Hyderabad's good-looking towers; at Mahbub Chowk. This area used to be full of shops and traders; so of course a clock to tell the time was very useful.

The tower sits in the middle of a little garden; and is designed in a mix of Indian and European styles. It was constructed in 1892 by Asman Jah, the Prime Minister of Hyderabad. It was awarded the INTACH Heritage Award in 2008 because of its unique architecture: there are Qutb Shahi style brackets, Corinthian columns, stucco work, wrought-iron railings, etc; all harmoniously balanced.
Posted by Deepa at 4:46:00 PM No comments: