I was looking for vintage posters on travel to India, when I came across this one: 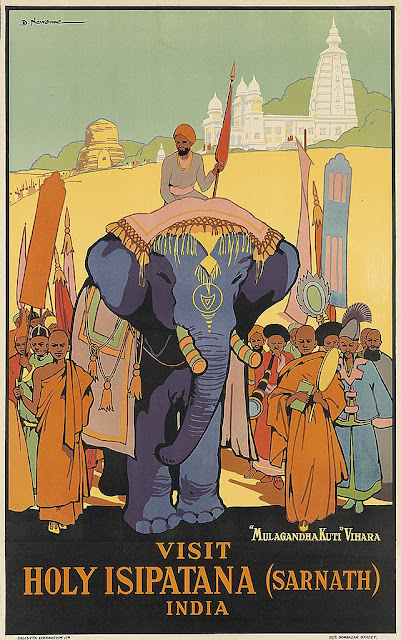 It's from the 1930's, for travel to Varanasi (to the holy Buddhist site of Sarnath). Commissioned by the Railways, it is part of a series designed by the artist Dorothy Newsome. She signs her name as D. Newsome, so of course, true to stereotype, I assumed it was a male artist. You think you're a feminist, and then this sort of thing comes along and trips you. I live and learn. Printed at the Calcutta Chromotype Ltd at Bowbazaar in Calcutta.

The word the poster uses for Sarnath is "Isipatana", the ancient name for the Deer Park where the Buddha preached his first sermon and set in motion the Wheel of Dharma (Dhamma Chakka).

Isipatana is an open space near Varanasi; it is the site of the famous Migadāya or Deer Park. After his Enlightenment, the Buddha joined his friends, the Pañcavaggiya monks, who were in Isipatana. To them he preached his first sermon, the Dhammacakkappavattana Sutta, on a full-moon day.

The name "Isipatana" is derived from the belief that sages and divine beings, as they fly to/from the Himalayas, alight here. In the Pali canon, the phrase "isayo ettha nipatanti uppatanti cāti-Isipatanam", means, "the place where the divine beings fly down to and alight/stay, that is known as Isipatana".

Isipatana is not just where the first sermon was preached. It is also the place where the Buddha spent many rainy seasons. Thus, many sermons originated here.

Isipatana was a very large and thriving Buddhist centre. We know from written records that there was a large community of monks at Isipatana in the second century B.C, when at the foundation ceremony of the Stupa in Anurādhapura, Sri Lanka, twelve thousand monks went from Isipatana,  led by the Elder Dhammasena. The Chinese traveller Huen Tsang, in the 7th century AD, recorded that 1500 monks were studying the Hinayana form of Buddhism in Isipatana.
Posted by Deepa at 10:55:00 AM No comments: Links to this post