The famous Puri Rath Yatra (Chariot Festival) was held this July in Orissa. As I was reading up on the festival, I came across a very interesting image.
But first let me give you a short introduction. Jagannath is an important deity of Orissa. The Jagannath temple in Puri is also the abode of his siblings, Baladeva and Subhadra. These three deities are carried in three enourmous chariots during the Rath Yatra.

According to the article I read, the region of Puri is shaped like a conch, and is called Shankha-kshetra. Similarly Bhubaneshwar is called Chakra-kshetra and Konark is named Padma-kshetra, all representing attributes of the Hindu god Vishnu.

As you can see in the picture, the temple of Jagannath stands at the heart of the conch, which acts like a map of Puri itself. Around the temple are numerous temples, shrines, trees and other religious sites.  There are approximately 115 such sacred spots scattered around the Jagannath temple, connected to the temple through a network of roads like a spiderweb.

I am not sure if the places drawn on the image are to scale. It is nevertheless a beautiful
visual of the Shankha-kshetra.

If you want to know more about the Rath Yatra, you can read our article here.
Posted by Unknown at 8:36:00 PM No comments:

The Lucknow School of Miniature Painting

This beautiful piece called 'Ascetics resting in a camp beside a Shrine' is a Mughal miniature painting from the Lucknow School. Created in the 1820s, it currently resides in the Mittal Museum of Hyderabad alongwith minature paintings from different schools across the country.

The Mughal style of miniature painting emerged in India during the 16th century. A blend of Persian, Hindu, Jain and Buddhist influences, the style developed in Mughal courts. It later spread to all courts, leading to the formation of different schools of Indian miniature painting.

The Lucknow School painted in the Mughal tradition, with some Rajput influences. This style of painting was popular till the 1800s, but declined slowly after the demise of the Awadhi Nawab Asaf-ud Daula. Later the school developed with European influences during the reign of Nawab Shuja-ud-Daula. By the end of the 18th century, the Lucknow school had become a Indo-European style of miniature painting.

Even today in many parts of the country, you can see groups of bairagis (ascetics) gathered together. Look at all the skin colours and the costumes that the artist has represented in this painting; showcasing the diversity of the bairagis.
Posted by Deepa at 1:03:00 PM No comments:

Update - Scaffolding at the Taj Mahal

A few weeks back we had put up a post about the restoration work going on at the Taj Mahal, with a picture of the scaffolding on it pillars. Here's the picture: 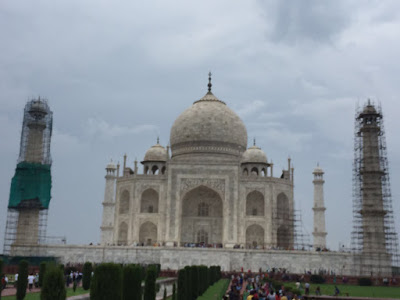 We now have been told that this scaffolding would most probably remain for the rest of the year. They are also putting up new scaffolding on the central body of the structure. 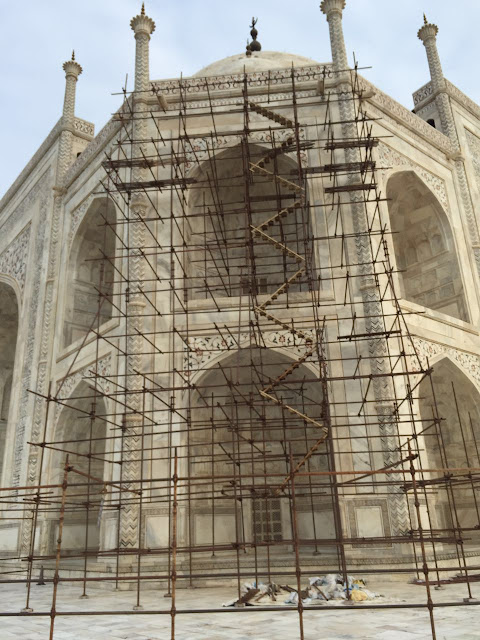 Email ThisBlogThis!Share to TwitterShare to FacebookShare to Pinterest
Labels: Agra

Veeragallu - The Hero Stones of Karnataka

Hero worship is a popular theme across mainstream Indian cinema. Films typically portray heroes as a saviour of the masses, someone who is willing to sacrifice himself for the greater good.

Such morals and sentiments may seem misplaced in the modern world, but between the 5th and 13th centuries AD, these sacrificial qualities were worthy of commemoration. Memorial stones were erected to immortalise those who selflessly pledged their life for the protection of women, village men and property.

Hero stones (called veeragallu in Kannada) are found all over India. These ornate stones are spread all over Karnataka; many are also found in the neighbouring states of Maharashtra, Tamil Nadu and Andhra Pradesh.
A Hero stone is divided into three sections: the lower portion gives details of the hero and his act of sacrifice (fighting the enemy with a sword or a bow, the army, cattle, or a damsel in distress). The middle panel shows the hero being carried to heaven by angel, and the highest panel depicts him sitting in front of a God, generally represented by the Shiva Linga.

They often carry inscriptions displaying a variety of adornments, including bas relief panels, frieze, and figures on carved stone. Usually they are in the form of a stone monument and may have an inscription at the bottom with a narrative of the battle.

1. Attack on Forts
These depict war scenes with soldiers riding on elephants and horses. Some have a fort wall etched in them. The Begur veergallu (pictured below) is the most notable and can be found at the Bangalore museum.
2. Ooralivu (Defending the village)
A hero must be ready to defend the village from enemy attacks at any given time.

3. Gadi Kalaga (Defending borders)
Border disputes among neighbouring villages were common. Defending their territory from encroachment was an honourable way to go.
4. Go Grahana (Defending cattle)
Cattle was an indicator of wealth, and cattle lifting was a common practice with the kings of ancient India, as with the chiefs of ancient Greece. In the Mahabharata, the theft of cattle by Duryodhana was regarded as an insult, leading to the Battle of Viratnagar. The hero stones commemorate the men who defended such capture or theft of cattle.
4. Pendirudeyurchu, Penbuyyall (Savior of Women)
These commemorate heroes who sacrificed themselves to protect the dignity of women being assaulted by the enemies.
5. Bete (Hunting)
Hunting was a very popular recreational game in Karnataka for royalty; and killing a wild beast such as a tiger or wild boar was no mean feat. Dogs were trained to corner the boars, and accompanied the men on these hunts. They hunted deer, crocodiles and defended themselves from a bear attack.

If you are visiting Karnataka, a great place to see these stones is Agrahara Bachhali, where they are housed in a temple-like enclosure. Make a day trip from Mysore, which is very close.
Posted by Karishma at 6:47:00 PM 2 comments:

If you go to the Goa Chitra Museum in Benaulim, Goa, you'll see these beautiful ceramic jars, in a uniform white and brown design. These elegant jars were traditionally used in Goan households to store cooking oil.

Goan cuisine is a blend of different culinary traditions; Hindu, Mughal and Portuguese. These diverse traditions are brought together by local ingredients such as vegetables, oils and spices, that given the cuisine its sumptious flavour.

The most important oil used in this cuisine is coconut oil.

Coconut oil is extracted from copra, dried pieces of coconut. The oil, which is usually a clear liquid, turns into a creamy white solid in cold weather. Most of the dishes in Goan and South Indian cuisine rely on coconut oil for their authentic flavour.

I can almost picturize the jars, slick with oil, kept in an old Goan kitchen. Can you?
Posted by Unknown at 9:34:00 AM No comments:

Padayani: The spirit of central Travancore

- By Aishwarya Javalgekar and Deepa Krishnan

Kerala is famous for its rich cultural heritage, and has many popular art forms to its name. But an art form that is perhaps not yet widely known is Padayani; the worship of Mother Goddess, practiced in the Bhagavathy temples of the central Travancore region.
Padayani is not just an art form. It is a community gathering to ensure the physical and mental well-being of the entire village. It is a set of rituals that transcends the boundaries of caste and religion, generating a sense of unity.

The legend says that Padayani originated as a form of prayer to pacify the goddess Kali, after she killed the demon Darika. This art form has several important cultural aspects:

In this outstanding video below, you can see entire cultural process explained with English sub-titles. The first 3 minutes are an excellent introduction in Malayalam, without sub-titles, but the rest of the video has wonderful sub-titles.

Padayani performances at temples are easily accessible from Cochin, Kumarakom or Alleppey. They are performed at night outside Bhadrakali temples, during the Padayani festival, typically between March and April. If you are visiting India this September, you can attend the padayani at the Neelamperoor Bhagavathy Temple at Kottayam on 29 Sep (photo below). It's only a 2hr drive from Cochin, and a 1hr drive from Kumarakom or Alleppey.
You can stay overnight in Kottayam if you prefer. The Athreya Ayurvedic Resort in Kottayam provides excellent therapies, so you can combine a detox stay with a festival visit. They also have yoga practitioners who can teach you yoga.

If you'd like more information about a tour that incorporates the Padayani festival, please send an email to deepa@magictoursofindia.com. Or you can also look up the Kerala Festival Calendar (search for "patayani") to see the schedule.
Posted by Unknown at 9:22:00 AM No comments: