Kedara Ghat is one of the most important ghats of Kashi.

Kedara is mentioned in the older Puranas and is therefore considered to be older than the more popular Vishweshara. The Gauri Kund (small water pool) at Kedara is called 'Adi Manikarnika', thus signifying that it is the original and greatest of Varanasi's tirthas. 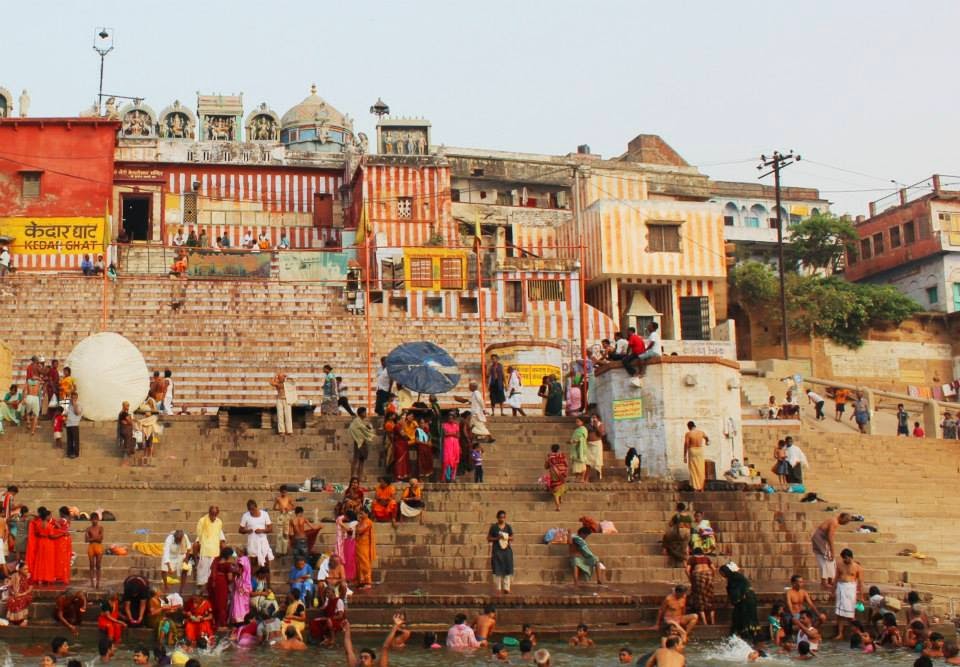 The Kedareswara Temple here is a 'jyotirlinga'; that is, one of the 12 places where Shiva is manifested in the form of light. Also the Kedareshwara temple at Kedar Ghat was not destroyed during Aurangazeb's rule, so the temple here remains one of the oldest major ones in the city.

Typically the people who worship here are South Indians, and also Bengalis.

The Sringeri Shankara Math is situated here. For people from the south one of the most important aspects of Kedara is that Adi Shankaracharya lived here and composed important works here, including the Manisha Panchakam and the Kashi Panchakam. In 1346, the 13th Shankaracharya of Dakshinamnaya Sri Sharada Peetham established the Sringeri Math in Kedara, near the Kedareswara Temple.

Kedareshwara Temple is right by the river, and is easily recognised by its colourful Dravidian temple architecture as well as the vertical striped walls. 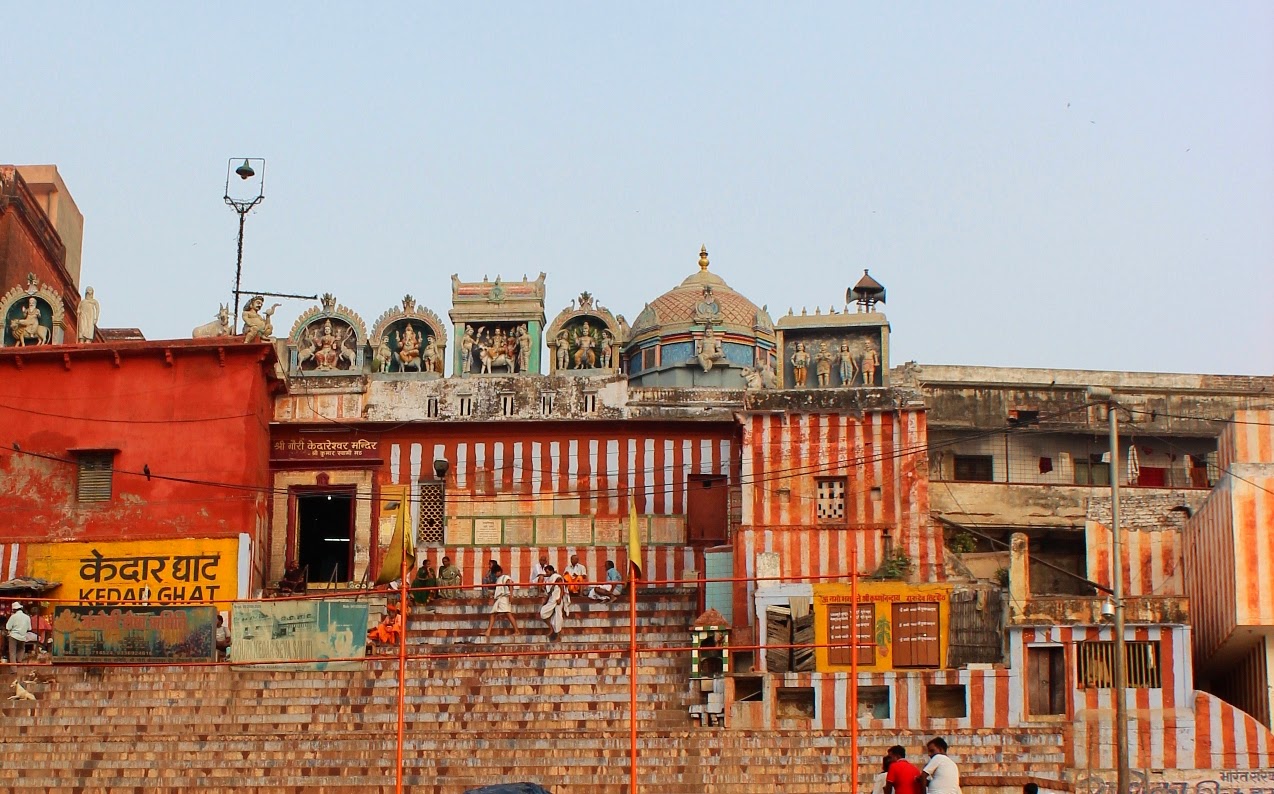 The word Kedara means meadow or field. According to the Kashi Kedara Mahatmya, Lord Shiva is supposed to have said: “It is known as the ‘field’ (Kedara) where the crop of liberation grows. Therefore, that place became famous as Kedara, both in Kashi and in the mountains”.
Posted by Deepa at 3:27:00 PM No comments:

The monsoon season marks the beginning of Chaumaas, four auspicious months from July to October. In Rajasthan, these rainy months are associated with wearing leheriya sarees and turbans. Leheriya is a tie-dye (bandhani) pattern of diagonal stripes. 'Leheriya' means waves, and the design is evocative of soothing water. When diagonal stripes are added in the opposite direction too, the design is called "mothra". 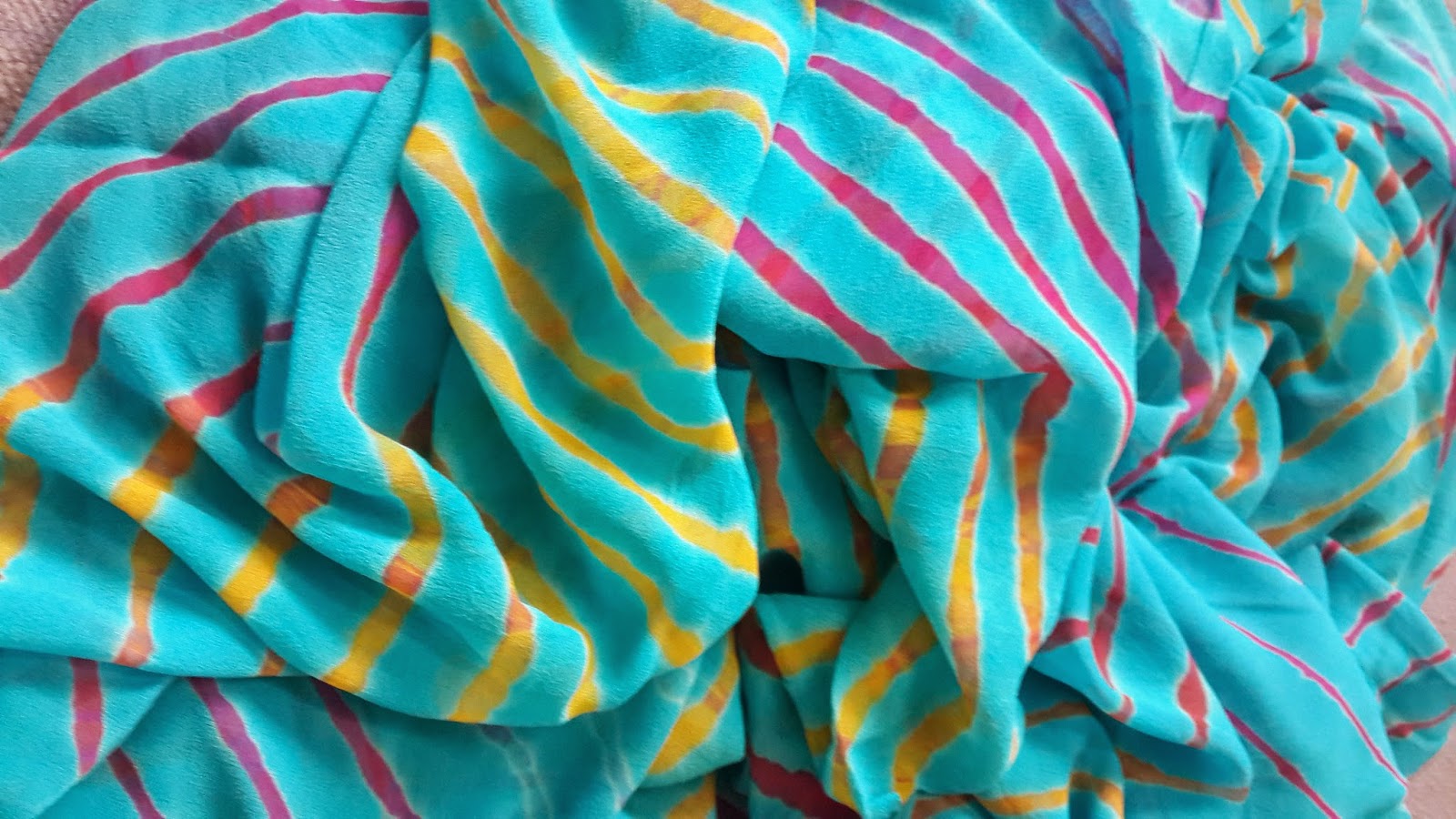 Leheriya cloth is sold with its ties still in place as proof of its authenticity. A small section of the cloth is unfolded to display the pattern to prospective buyers.
Posted by Deepa at 10:11:00 AM No comments:

Continuing the Ghat series: this is the Manmandir Ghat, right next to the popular Dasashwamedh Ghat. 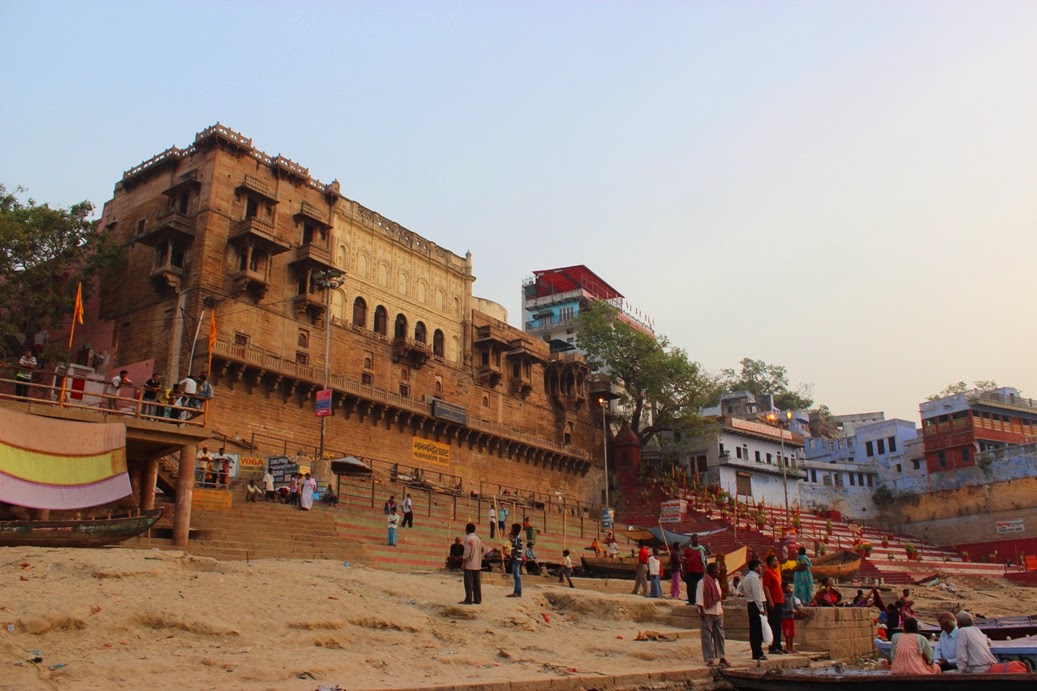 Earlier this ghat was called Someshwar Ghat. In 1586, Raja Man Singh of Amber developed this ghat and built a grand palace here. So the ghat was named after him.

In the 1700's Sawai Jai Singh of Jaipur built an astronomical Observatory on the roof of the palace; the observatory is now in ruins; although it was repaired by 1911-12 by Sawai Madho Singh of Jaipur, and then further by Department of Tourism in 2000.

The palace building is still visible and is a good example of Rajput and Durg architecture, with ornate carved windows.

The upper part of the ghat has shrines to Someshwara, Dalabeshwara, Rameshwara and Stuladanta Vinayaka.
Posted by Deepa at 8:17:00 AM No comments:

The Sikh connection to Varanasi 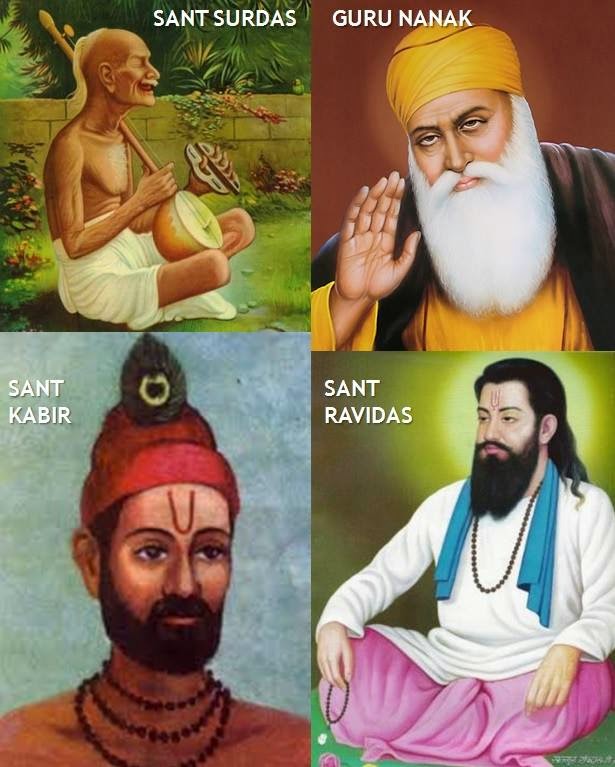 Everyone knows that Varanasi is an important place for Hindus and Buddhists, but did you know that it is of importance for Sikhs too?

Guru Nanak visited Varanasi in 1506 and collected the writings of Kabir, Ravidas and other saints, which were incorporated into the teachings of the Sikh faith.

The Gurubagh Gurudwara was built at the place where Nanak stayed in Varanasi. You can visit it if interested, it is a small gurdwara but important to the Sikhs because it is the location where Nanak had discussions with orthodox pandits explaining the beliefs of Sikhism.

Photos of the gurudwara are here, on the Historical Gurudwaras website.
Posted by Deepa at 8:13:00 AM No comments: