If you want to shop for souveniers in Banglore, Balaji's Antiques is a great place to check out! They have some pretty awesome stuff, collected from all over South India. I loved this door guardian figure that they posted on their website.
Dwarapalakas (‘Guardian of the door’ traditionally appear in pairs in Hindu architecture outside the temple door or/and sanctum as gatekeepers or guardians of the deity. These guardians are fearsome warriors or giants and are often seen holding a mace, as this one is. This dwarapalaka’s tongue is sticking slightly out which is a warning mudra, ‘be careful I am here.’

Some sources believe that the Dwarapalakas represent a stage in the spiritual progress of the soul. They represent the devotee who can think of only God and no one else.

You can check out their collection here http://balajiantiques.com/
Posted by Unknown at 6:03:00 PM No comments:

Nine River Goddesses at the Kumbakonam Temple in Tamil Nadu

One of the Navakannikas, the nine river goddesses, at their famous temple at Kumbakonam. She is represented with her attendants. Look at the beautiful play of texture and colour!!

There is a very major Mahamaham festival that happens once in 12 years at this temple. About 5 million people showed up for the last one in 2004 (!!). It is believed that all the nine goddesses come with Lord Siva to bathe in the temple tank at this time. The next festival is Feb 2016, in case you're planning that far ahead.

Three of Tamil Nadu's outstanding crafts came together to create this simple but dazzlingly stunning visual of a river Goddess. Stone carvers, textile weavers, and bronze artisans, all worked on it. The temple architects designed the layout. The priests expressed their devotion through decoration. Truly, such beauty is divine. Without such aesthetics, the Indian soul would be dead.

The cave-temple, Govardhana in Banglore

The statue you see, is of Lord Krishna, in the Govardhana Temple at Basavangudi, Bangalore. 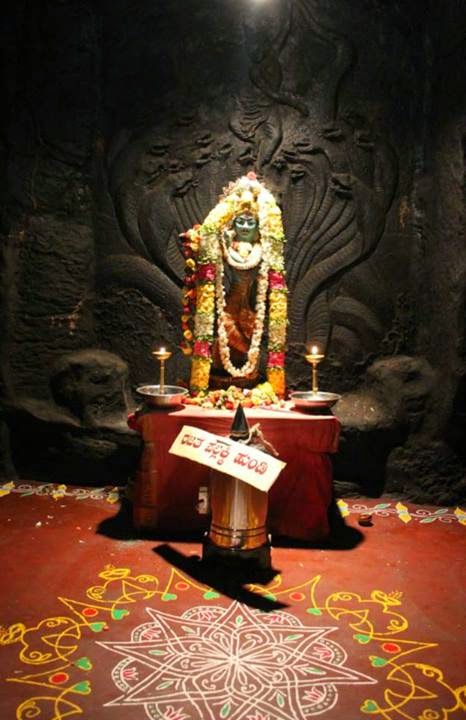 The temple falls under the of the Madhava sect of Hinduism. Acharya Madhva (1238-1317) was the founder Philosopher of Tattvavada, more popularly known as the Dvaita School of Vedanta.

The 'cave temple' was built in 2004 by a lady named Dr. Nalini Rao, as a devotional offering. It is built in a unique architectural style to recreate the legendary mountain Govardhana.

It is believed that Lord Krishna once held up the mountain, on his little finger, for seven days to shield his village from torrential rains. Some Vaishnavites even believe that this mountain is an extension of Krishna, thus making it a holy site. The event, popularly known as 'Govardhana-shila' is often represented in religious art, but this temple is a whole different level of devotion!
You can wander inside a mountain labyrinth to see beautiful scenes from Krishna's life carved on the walls. Instead of a closed sanctum, this idol of Krishna is at the heart of the temple.

In the background of this photo you can see Krishna conquering the poisonous serpent Kalia who terrorized the people of Brindavan. Krishna merely had to dance on the serpent's head for it to start dying. Legend's about Krishna always have a playful air to them, don't they?

This temple is quite unusual, for more than one reason. Firstly its focus on story-telling is commendable and makes for such an interesting visit. Secondly, how often do we see a modern-day Indian woman financing a whole temple?
Posted by Unknown at 5:23:00 PM No comments:

Dhurrie making near Jodhpur. Dhurries are reversible flat-weave rugs or mats. Typical designs are geometric. There is a lot of innovation now in designs. 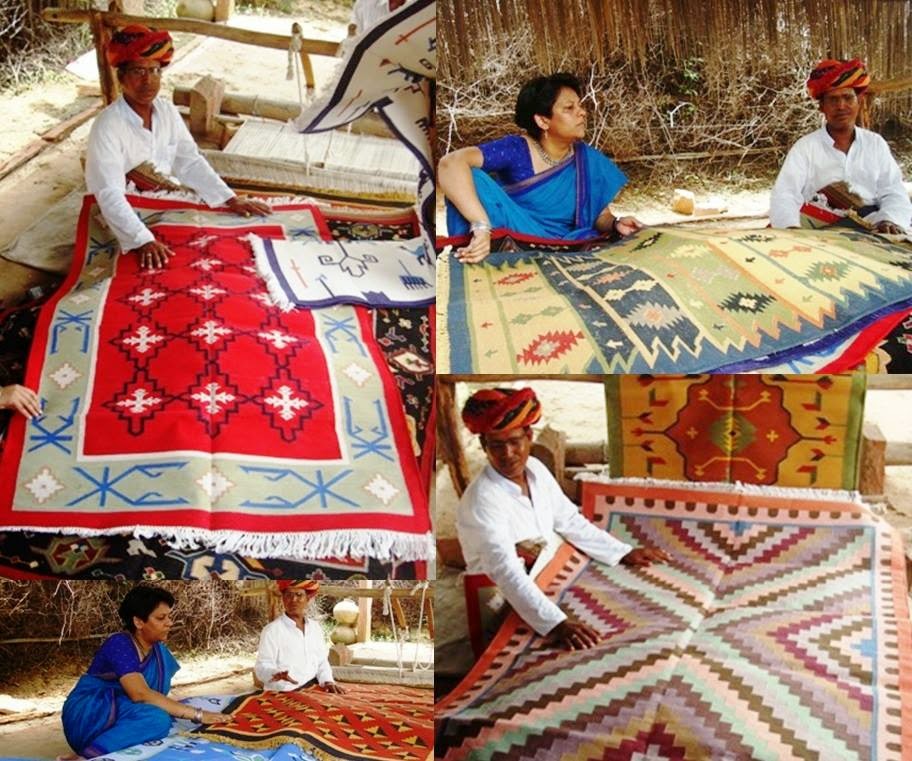 At sunset when the Thar desert (Rajasthan) is golden and the colours are surreal. This is a group of female neelgai antelope with young ones. 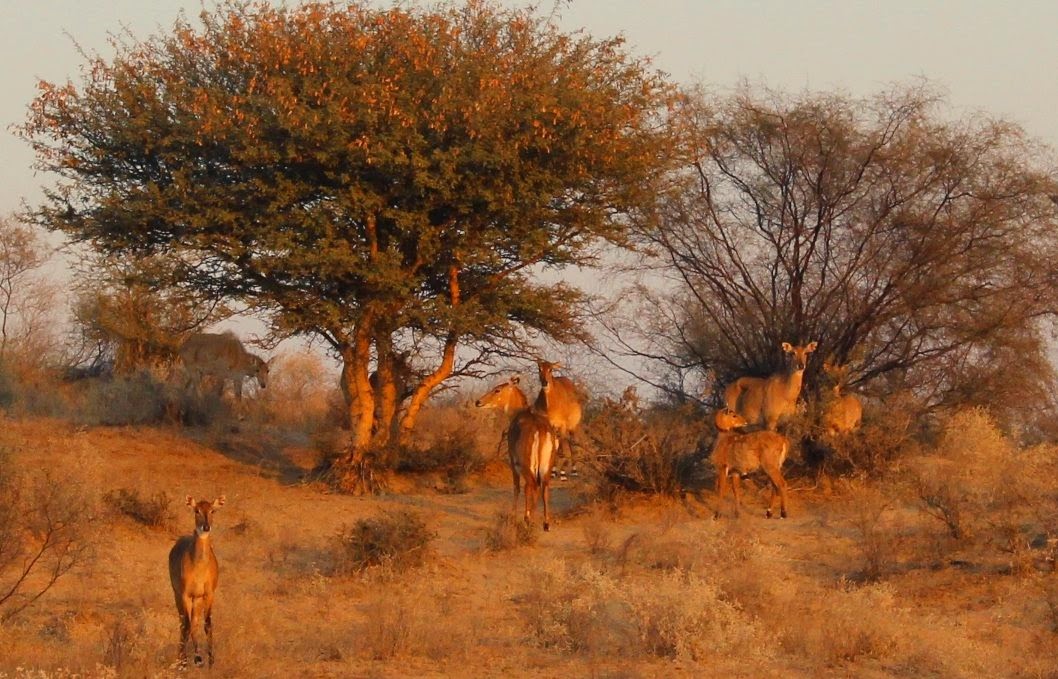 We were ooh-ing and aah-ing when our guide explained to us that the neelgai were a major threat to his farm crop (millet and mustard are grown in the Thar, apart from many other things). The negative feeling in his voice was clear: he did not like these animals. His tone made me stop and think about man-animal conflict, and how groups of people who traditionally have coexisted with animals are now losing their tolerance.

Traditionally the neelgai has not been hunted in India because it is believed that this is a type of cow. But attitudes are changing.

I don't blame the farmer. Life is precarious in the desert, and farming is not easy. Once the crop is sown, it must be guarded from being eaten, which is of course, taxing for small farmers (since the labour usually is sourced entirely from the farmer's family).

Unfortunately, there is no systematic, nation-wide approach towards managing man-animal conflict. The root causes of the problem are well known: widespread loss of natural habitat and food sources, changes in land use and cropping patterns, cutting off of wildlife corridors, and so on.

What is to be done? We need comprehensive policies that treat land in a holistic manner irrespective of state boundaries; we need to think about our 'development' model. Most importantly, we need to stop producing more and more Indians!! The huge population needs to stop growing at unsustainable rates.

None of these solutions are easy.

Here's an article that talks about the man-animal conflicts in India.
Posted by Unknown at 2:50:00 PM No comments:

Attukal Pongal, the largest congregation of women in the world, Kerala 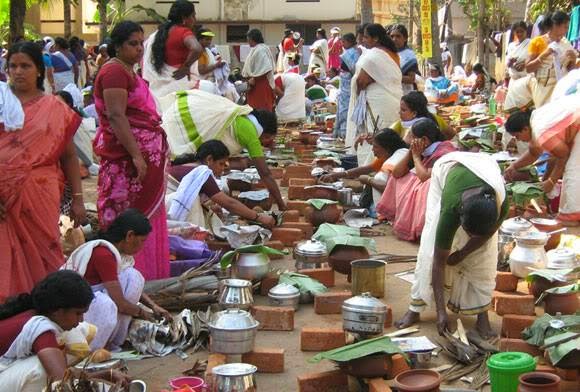 Attukal Pongala at the Attukal Bhagavathy temple in Thiruvananthapuram is the largest congregation of women in the world (it won a Guiness for this!)

The ceremony involves boiling pongala (a mix of rice, jaggery and coconut) till it overflows. The overflow is necessary to appease the wrathful aspect of feminine energy. Once appeased, the goddess is capable of far-reaching changes in human life.

Interesting isn’t it? Once anger leaves us, we understand better, we make our own miracles with solutions. But for anger to leave us we must first give its due, it may demand apology, a reassurance, a kind stroke of understanding or some form of reconciliation. Then, it settles but it will show its face again. Thus a ritual of attentive reassurance comes to be.

Salt making in the Rann of Kutch

Salt making in India is a very old tradition, dating back to the Harappan Civilisation. In her book "The Ancient Indus Valley: New Perspectives", Jane McIntosh suggests that salt was used by the ancient people of the Indus Valley both for cooking and for preserving food-products such as fish. Findings from a Harrapan excavation site at Padri in Saurashtra, Gujarat suggest that it was probably a salt making area.
The East India Company established a monopoly over the production and supply of salt in India. Kharaghoda in the Surendranagar district of Gujarat became the salt hub under the East India Company. By the mid-1800's, 10% of the total revenues of the Company came from salt.

In later years, under the British monarchy, heavy taxes were levied on Indian salt to discourage local production and encourage import of salt from England. When India became independent in 1947, salt was being imported from the United Kingdom and Aden. However, by 1953, India had achieved self-sufficiency in salt. India is now the third largest producer of salt in the world nearly 30% of our annual production of 17 million tonnes is exported.
Posted by Unknown at 7:39:00 AM No comments:

Email ThisBlogThis!Share to TwitterShare to FacebookShare to Pinterest
Labels: Gujarat 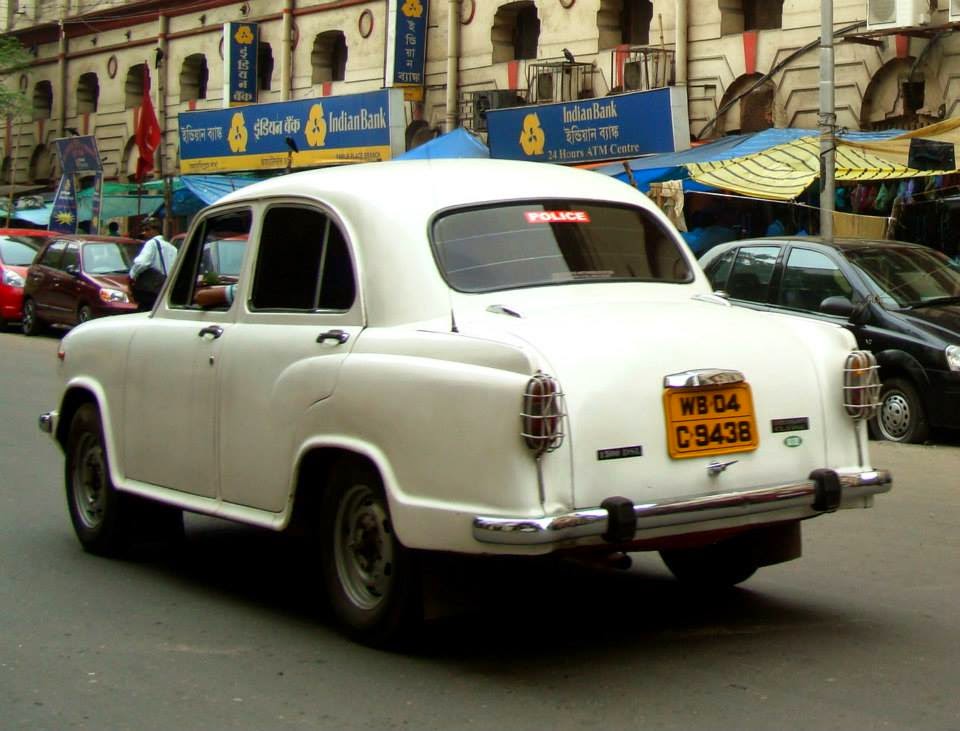 White Ambassador car, displaying Police sticker. The automobile is manufactured by Hindustan Motors at its Uttarpara plant near Kolkata. The Amby, as it is affectionately called, has been in continuous production since its inception, with very few improvements or changes.

The Amby is used by government departments, including the Kolkata Police.

About the Kolkata Police: The Calcutta Police Act and the Calcutta Suburban Police Act, which are still in force, were enacted in 1866. After India gained independence from British rule in 1947, Calcutta Police was re-organised as an arm of a newly emerged nation-state keen on consolidating its freedom. Surendra Nath Chatterjee was the first Indian Commissioner of Police.

Samosa Stuffing in the making, Jaipur

Stuffing for samosa, being cooked in a large iron pan. It has potatoes, peas, garam masala and green chillies. 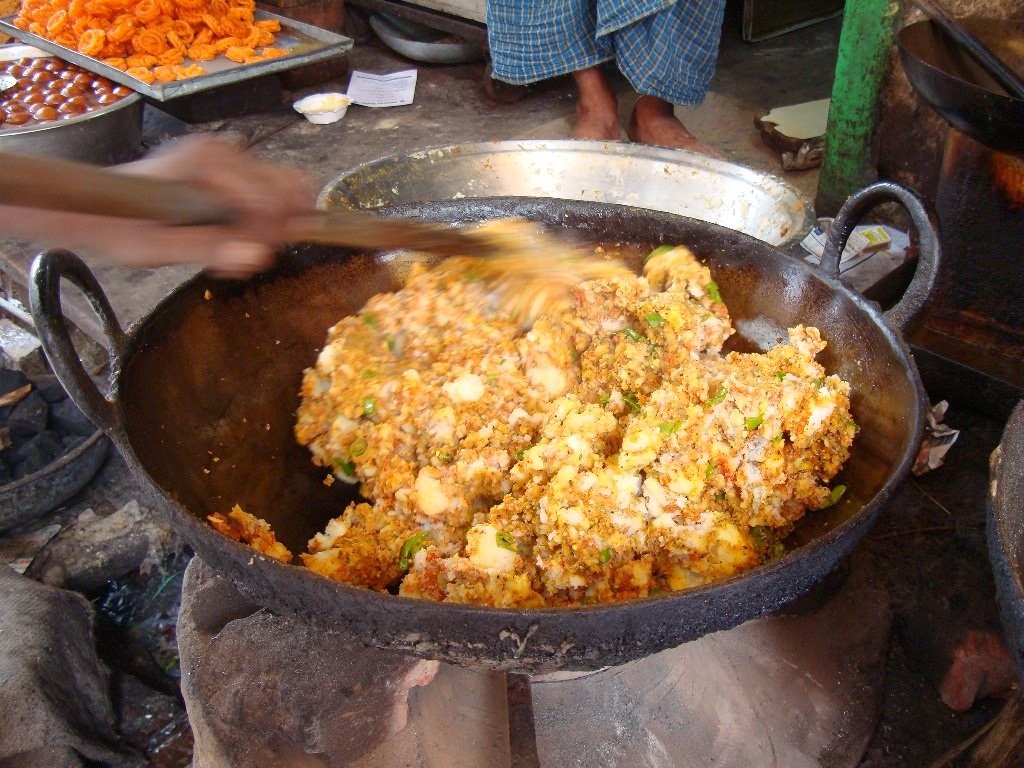 Any idea what this is? Water apple - Champakka in Malayalam.
Colour: White when unripe, pink as it ripens
Texture: Tough skinned and succulent
Taste: mildly sweet, sour when white
Season: Monsoon
Kids love climbing the trees and plucking the fruit. Once they have enough, they clamber down and take out the treasures.
The climate makes Kerala a great place for rare fruits. 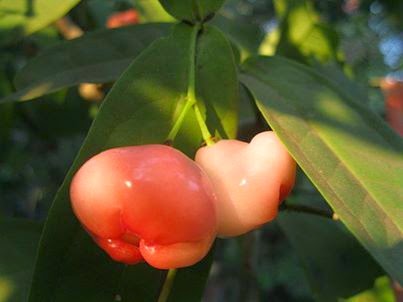 Photo credit: http://commons.wikimedia.org/wiki/File:Champakka%28water_apple%29.jpg
Posted by neha sethi at 10:39:00 AM No comments: 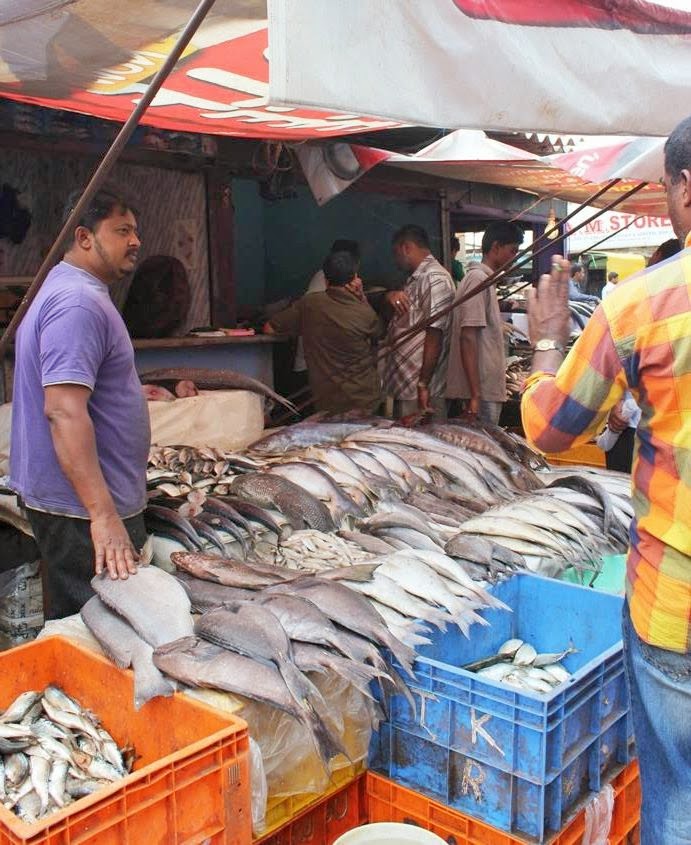