The koorkai is a tuber that begins life like others of its ilk, underground. Once dug up, it is quite common to find them appearing as near-perfect rounds which would explain its latin name P. Rotundifolius.

The 'P' may as well stay silent since its presence does little to highlight the shape. It's also called the Chinese Potato though its origin was in West Africa, now figure that cross-many-borders puzzle.
The time consuming part about making koorka is the peeling, a legal shortcut involves putting the uncooked tubers into a jute bag and jostling it until the peels oblige and you know, slip off. If you cook the koorka, this method is illegal. That is simply because the peel comes off easily once pressure cooked. Why would anyone choose the former method? Well, it tastes way better. Deep fried, like chips.

The common koorkai is best in fried form, you know, first fry up the mustard seeds, a dash of white lentil, a few red chillies and turmeric powder to a respectable quantity of oil. It's winter food, fried is good winter food. To this, add the pre-boiled, peeled and cubed tuber to this. Some may cut it long, some add it whole (which involves selecting similarly sized roundelles just to add to the time consumed), to each their own.

As with all highly recommended fried tubers, this is best had hot with rice and spicy rasam. Or plain. 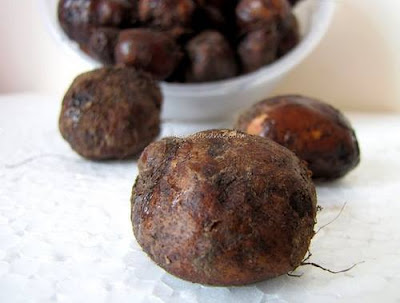 Near perfect rounds, called spheres in polite circles
We'll call the hairs tangents
Geometry session can be had
As you eat, there shouldn't be hairy tangents though
They draw away from the food at hand (pun, anyone?) 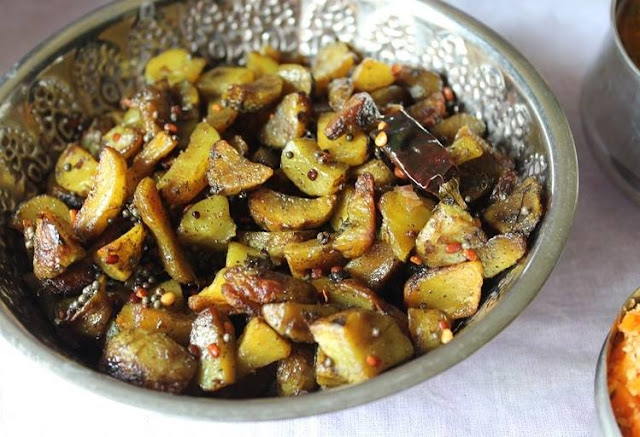 The worthwhile outcome
What I like is the greasy no-holds-barred name, mezhuku (oil) varati (tossed till it shrivels to a fraction)
Posted by Unknown at 11:23:00 AM No comments: