The sacred river Indrayani originates a few kilometers from Pune, near Lonavla in the Sahyadri mountains, and flows east to meet the Bhima river, passing through the pilgrimage towns of Dehu and Alandi (both are in Pune District). 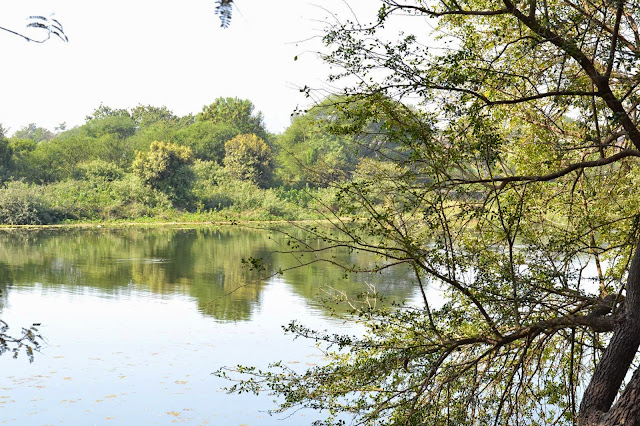 Tukaram was born in 1608 in Dehu. He is considered the single most influential figure in the history of Marathi literature. By composing in Marathi, Tukaram incurred the wrath of the Brahmins who believed he had overstepped the bounds of his low caste. The local legend is that the Brahmins compelled Tukaram to throw his manuscripts into the river. Tukaram then commenced a fast-unto-death, and after thirteen days the manuscripts of Tukaram’s poems miraculously reappeared floating in the waters. 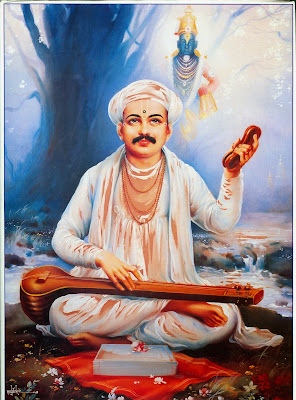 Dynaneshwar was born near Paithan, but attained samadhi at Alandi at the age of 21. He wrote Bhavarth Deepika, popularly known as Dynaneshwari. It is a commentary on the Bhagvad Gita, written in Marathi, and is considered a major milestone in Marathi literature. 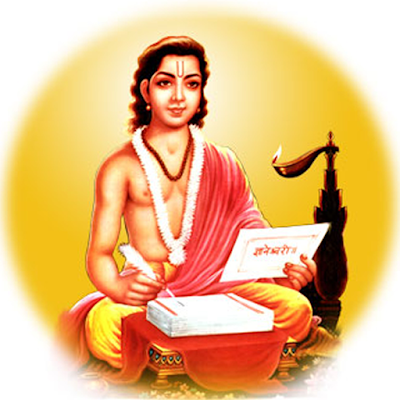 Bahinabai Chaudhari (1880 - 1951) was a Marathi poet from Jalgaon district (just north of Aurangabad). She composed in Ahirani dialect of Marathi, commonly spoken in the region. Since she herself was illiterate, her son wrote down the poems for her. Her poetry is full of quiet wisdom and observations of nature and rural life around her. 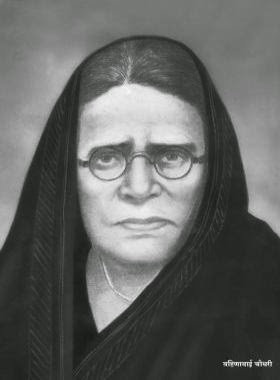 Most of her poems were based on agriculture, nature and the lives of farmers.

Here are two of her many compositions:

(So royal is the farmer, walking barefooted,
Look under his feet, the thorns are bent)

(Breath in, Breath out, life so is your doctrine
Life and death are just a breath apart)
Posted by Unknown at 12:41:00 PM No comments:

The Maratha alliance with the British

This painting shows the signing of an important treaty between the East India Company and the Marathas in 1790. By signing this treaty, the Marathas agreed to join hands with the British against another Indian ruler, Tipu Sultan of Mysore. 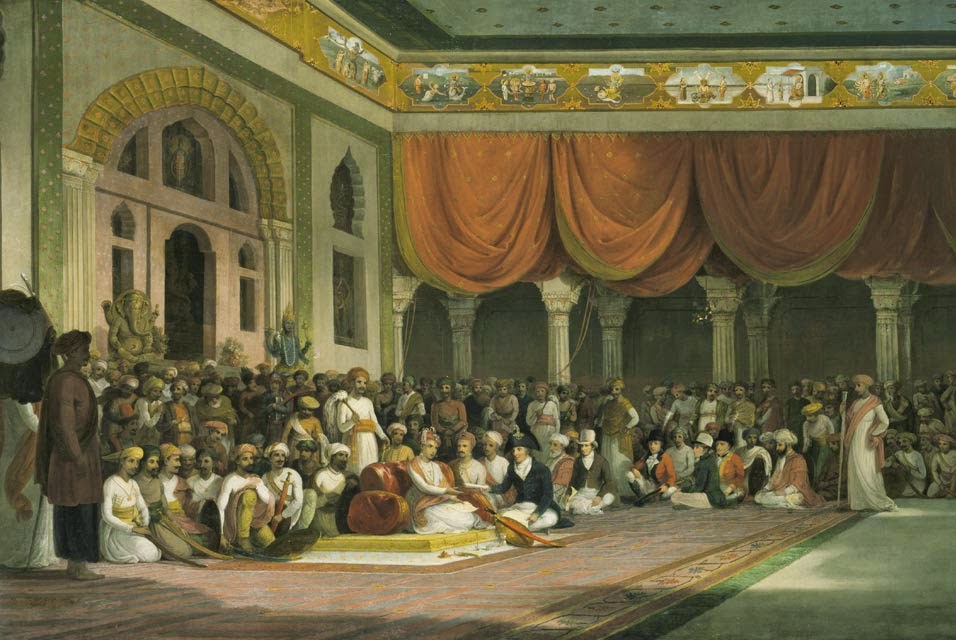 The representative of the East India company was Sir Charles Warre Malet. You can see him seated cross legged in this photo, although frankly, I don't know how he managed it in those tight pants :) Later he was awarded a Baronetcy for the strategic importance of this treaty. It was Malet who commissioned the painting, to commemorate his own role.


Originally, the Scottish artist James Wales was supposed to paint it. But he died in 1795, and eventually this painting was done was done by Thomas Daniell in 1805. Daniell painted it in England, but had previously travelled extensively in India, spending 10 years here.

The painting shows the interior of Shaniwarwada palace. The palace burned down under mysterious circumstances in 1828, but this painting shows us how beautiful the teakwood work was.

The head of the Marathas, the Peshwa at the time (seen seated on the gaddi) is Sawai Madhavrao II and near the Peshwa we can see the powerful advisor Nana Phadnavis, the "Machiavelli of the Deccan", who literally ran the Maratha empire.


According to a letter sent from India to the Board of Directors of the East India Company, the treaty could not be signed without "the spirited and unwearied exertions of your Resident Mr. Malet, the steadiness of the Minister Nana Furnavees, and the good offices of Behroo Punt, the agent of the Durbar for transacting the business of the English, and we must not exclude from the number of their friends the Mahratta Chief Mahdajee Sindia, who contributed by his own representations to forward the alliance"

Tipu sent a large amount of money to the Maratha generals to delay or avert this treaty, but it did not work. The three parties to the treaty, who aligned themselves against Tipu, were the Marathas, the East India Company, and the Nizam Asaf Jah of Hyderabad. Against this triple alliance, Tipu lost the third Anglo-Mysore war and was forced to cede half his territories to the allies, and deliver two of his sons as hostages pending payment of 3.3 crores.

Here is another painting, this one by James Wales. It is portrait of the Peshwa (on the left), with Nana Phadnavis (on the right).

Nana Phadnavis (1742 - 1800) inherited his position from his grandfather, who was a minister for Chattrapati Shahu. He held the Maratha state together through a period of extreme political turmoil and intrigue, and helped it survive many threats from within and without. Apart from dealing with internal dissension, rivalries and sudden transfers of power, Nana Phadnavis was involved in several battles with the Nizam of Hyderabad, Hyder Ali and Tipu Sultan of Mysore, and the English East India Company. The above portrait was commissioned by Madhavrao II in 1792.
Posted by Unknown at 9:44:00 AM No comments:

Like Manmandir Ghat, Mansarovar Ghat was built by Raja Man Singh of Amber (Jaipur) in 1585. The king also added a pool (kund) nearby called Mansarovar Kund. It was believed that the water in the pool gave equal merit as the sacred Lake Mansarovar (in Tibet): thus the nearby ghat was also given the name Mansarovar.
The ghat was rebuilt multiple times, by the king's descendants and by the government of Uttar Pradesh. While the ghat became pucca, the pool (kund) became smaller due to lack of space and turned into a well called Mansarovar Kupa.

Another name of Mansarovar Ghat is Kshemeshvara Ghat. This is named after Kshema Gana, one of Lord Shiva's ganas, who is said to be the founder of the linga in a Shiva temple nearby.

In 1962, the upper part of the ghat was purchased by the Kumaraswamy Matt, established by the 17th century saint Kumaragurupapar in Kashi. He was born in Tamil Nadu and later travelled to Kashi to spread the teachings of Shaivism. The Matt has now constructed a building with shrines and rest houses for pilgrims.

Bibi ka Maqbara (Mausoleum of the Lady) was built for Dilras Banu Begum, the wife of Mughal Emperor Aurangzeb. It was built after her death by her son, Prince Azam Shah between 1651 and 1661.
It was intended to rival the Taj, but eventually ended up with smaller proportions. So what, I say? It's still gorgeous! The symmetry and delicacy of the mausoleum, built in pure marble ox-carted all the way from Jaipur, is as stunning as ever.
Posted by Unknown at 2:25:00 PM No comments:

The kaajerlok are many. Kaaj = Work, Lok = People. These are the working people of Calcutta, the energy that keeps the machine going. Drivers, plumbers, electricians, carpenters, rickshawallahs, shop assistants, odd-job men, labourers; they are all over the streets of the city.

Incomes range from Rs 50 a day for basic jobs, to Rs 300 for more skilled jobs. Some look more prosperous, like these two men I saw, one of them has a cell phone in his hand, and I wondered if they had some specialist skill or trade for which they could be hired for the day.
Often you can identify the kaajerlok by what they wear. There is almost a uniform sometimes - the red gamcha (towel), banian (sleeveless vest), and the lungi (sarong). The gamcha is bright red when it is new; it is starched, crisp, so much so that even after 5 washes it continues to be stubbornly stiff. But as time goes, the red fades, it becomes very soft. It is versatile, a cloth put to many uses, to wipe off sweat, to shield the nape of the neck, to protect from the mid-day sun.
The kaajerlok are also women; some wizened, some young, and many work as domestic help. You don't see them on the streets that much, unless they have been sent out on an errand. But they exist - an army of maids, washing clothes, doing the dishes and sweeping floors. If you go to a middle-class Bengali home, you will see them. Many of them work in multiple homes. They assist with cooking as well.

The kaajerlok all have one thing in common - a desh, or a gaon, a village to which they return year after year. This is of course, the very village whose clutches they escaped to come to the city. But they will return, as frequently as they can. It is a hungry gaping maw, this desh, it takes every last scrap of their city earnings and leaves them more broke than ever.

If you talk to labourers in Calcutta, you will hear tales of a small village home, of extended family, old debts and above all, of poverty. But they will speak of the village with fondness and nostalgia, even though it sucks every penny they save in the city. Often they go to the village for extended periods; and when they return, they are half the size that they were, they come back sunburnt and looking half-starved, and ready to let the city grind their bones all over again.

Bazaars of Hyderabad: Moazaam Jahi Market, then and now

Built in the 1930's at a major crossroad of the city, Moazzam Jahi Market even today remains a busy and important market. 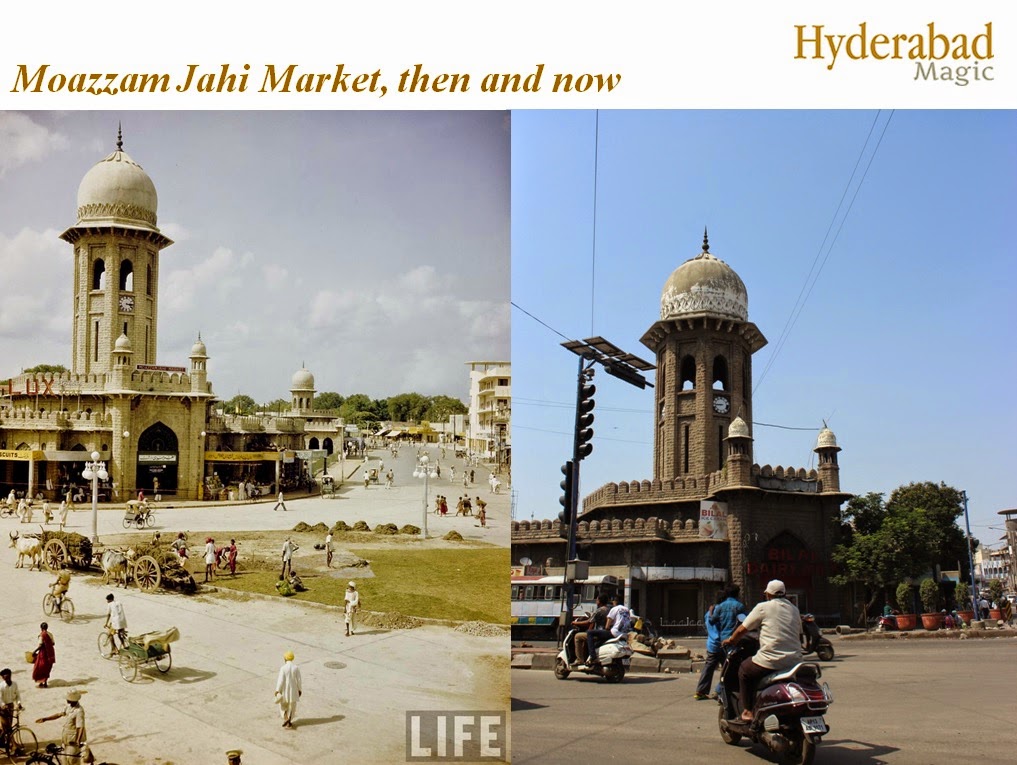 After the Musi floods of 1908 and the plague of 1911, Mir Osman Ali, the Last Nizam of Hyderabad, undertook measures for improving water management, sanitation and urban planning in Hyderabad. The famous Sri Visveswaraiya from Mysore state, who had engineered many marvels there, was invited to Hyderabad. A City Improvement Trust was formed, and many new buildings were erected. These included the Osmania General Hospital, Unani Hospital, High Court, City College, Patherghati Complex and Moazzam Jahi Market.

Both Pathaghatti and Moazaam Jahi are bazaar areas, intended for business. In Moazzam Jahi market, there are more than 100 shops, selling fruits, vegetables, flowers, meat, paan, attar, metalwork and of course, the famous ice-creams! There's a shop called FAMOUS ICECREAM at this market, and there is another one called BILAL. Some time ago, I wrote about the ice-creams at Bilals, inside this market. You can see how the inside of this market looks in this ice-cream story here: http://magictoursblog.blogspot.in/2014/08/bilal-ice-cream-at-moazzam-jahi-market.html
Posted by Deepa at 3:01:00 PM No comments:

I clicked this photo from one of the many viewing points in Amer Fort. You can see the Aravalli Hills in this photo. Beginning in Gujarat, near Ahmedabad, the Aravallis stretch across Rajasthan in a north-easterly direction, ending in Delhi. 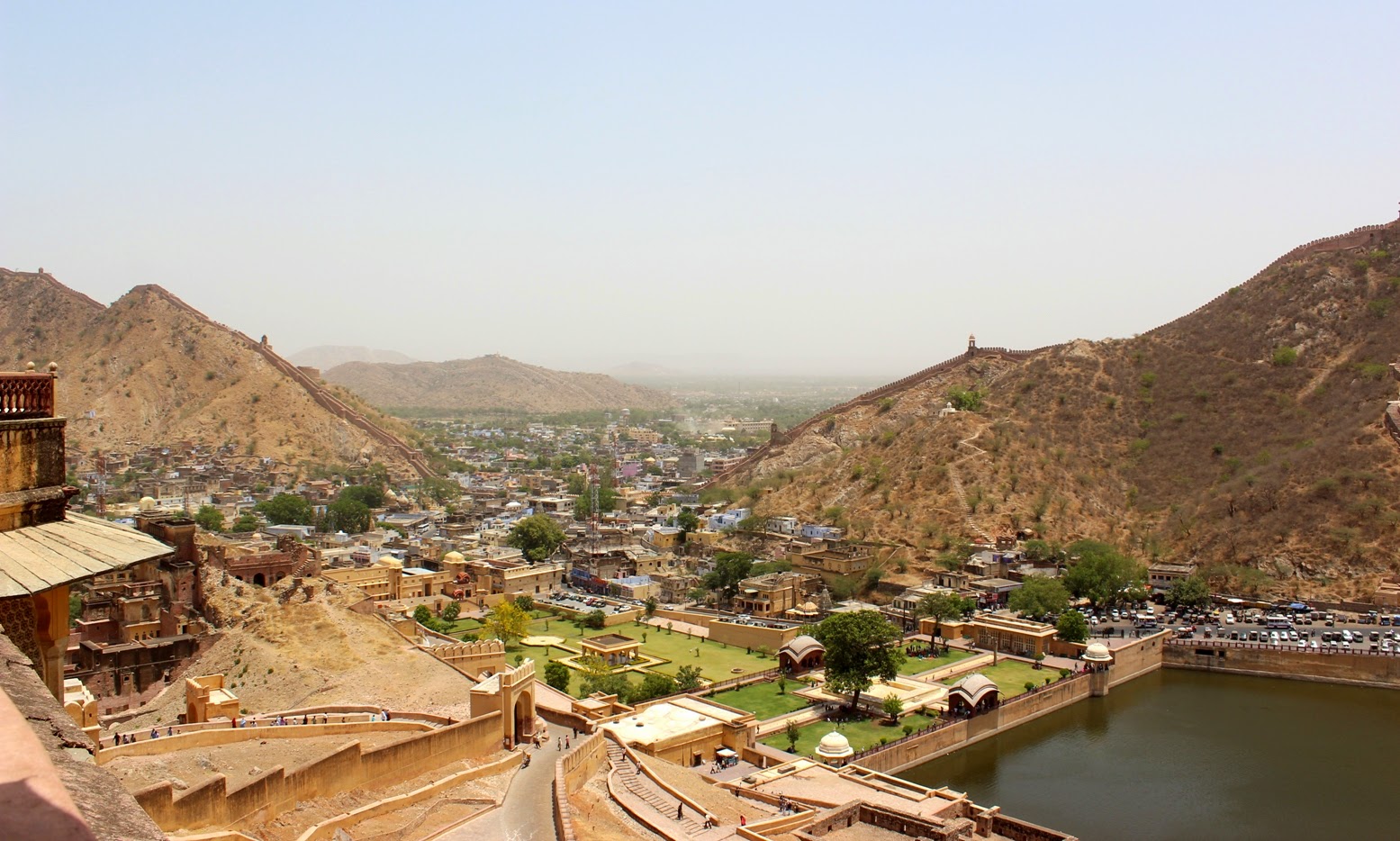 The Aravallis are India's oldest mountain range. They define the ecology of Rajasthan, by providing a barrier to the Thar desert; they prevent the desert from growing. Several rivers originate in the Aravallis.


Many of Rajasthan's superb forts are located on hilltops in the Aravallis. Last year six of them were declared UNESCO World Heritage sites: Chittorgarh, Kumbhalgarh, Ranthambhore (Sawai Madhopur), Jhalawar, Jaipur, and Jaisalmer.  I've marked them out on a map below. 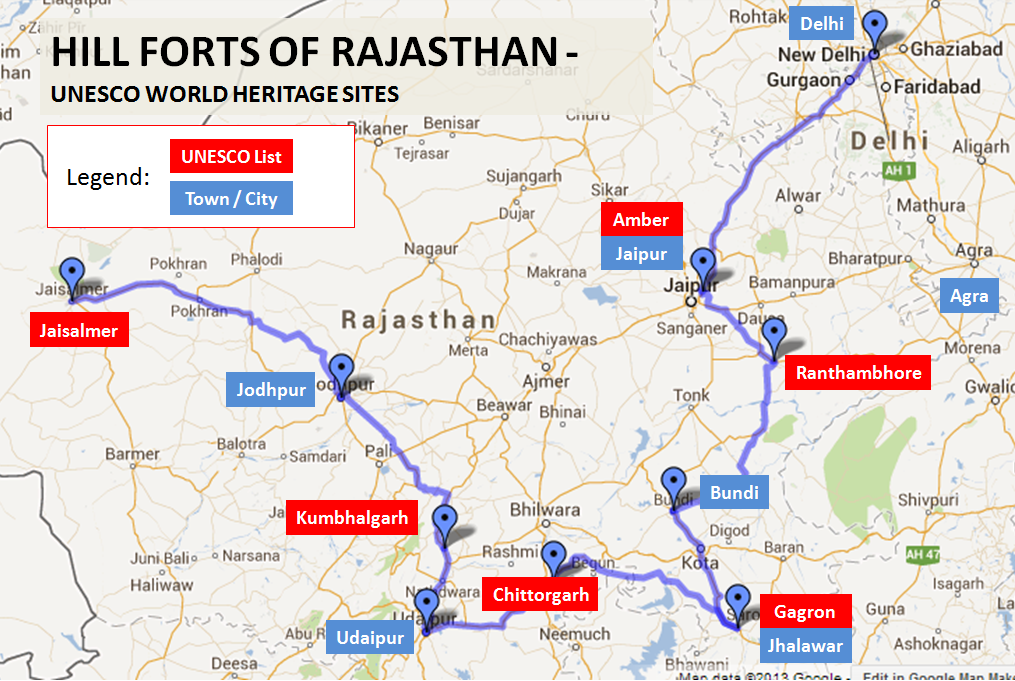 More information about the forts and how to visit them is in my article here.
Posted by Deepa at 8:30:00 PM No comments: