Of all the Europeans who made fortunes in India, Major-General Claude Martin is unique,  because he bequeathed the major part of his wealth to charities, and thus left a lasting legacy in India.

Claude Martin was the son of a casket maker from Lyon. Abandoning the family business, he came to India as an officer in the French East India Company. When the French lost Pondicherry to the English, he switched over to the British East India Company. His fortunes took a turn for the better after that; and his services were requested by the Nawab of Awadh, Asaf-ud-Daulah. As an able administrator and man of astute financial acumen, he soon amassed a great fortune. He was believed to be the richest Frenchman in India!
From this wealth, he commissioned the construction of Constantia, a palatial building that was supposed to be his country residence. Though its construction began in 1785, it could not be completed until 1802, two years after Martin's death. Martin is buried beneath the building, in a vault constructed specially for that purpose; for which he left detailed instructions in his will.

Martin dedicated his fortune to the establishment of schools in Lucknow, Calcutta and Lyon, his birthplace in France. The schools were named 'La Martinière' in his memory. As per his will, the school in Lucknow was established at Constantia.

Even after all these years, La Martinière schools and colleges still remain among the grandest educational institutions in India.
Posted by Unknown at 9:44:00 PM No comments:

One of Kerala's biggest festivals is the 'elephant festival' at Thrissur. The festivities, dedicated to the Hindu God Shiva, last for over 36 hours. They start when small elephant processions carry deities from various villages across Thrissur and culminate at the grounds of the Vadukunathan Temple.

The festival is marked by fireworks, and a display of umbrellas, as well as caparisons that adorn the elephants. Typically, the festival takes place during April-May.
There is increasing awareness in Kerala these days regarding the need for better treatment of elephants. A movement against the training and use of elephants is slowly taking shape. However, elephants have been an integral part of Kerala culture for hundreds of years and in fact, many of the majestic elephants have fan clubs of their own. You can find these fan clubs on facebook these days. Fans eagerly await the festivals and the processions.

The Living Root Bridges of Meghalaya

May conjures up images of sweltering Indian summers, but in the north-eastern mountains of Meghalaya, it is the time for the Indian Summer Monsoon. 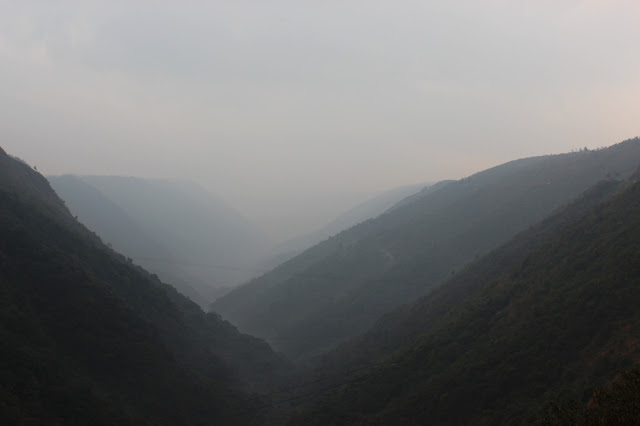 Cherapunjee in Meghalaya is among the rainiest places in the world; but you can easily visit it before the monsoon arrives in full force. Apart from the cool weather and beautiful clouds, the chief attractions of Cherapunjee are the famous Living Root Bridges.


The Living Root Bridges are a man-made natural wonder. The local Khasi people developed an ancient network of bridge building that leaves visitors stunned. The secondary roots of the rubber fig tree (scientific name: Ficus elastica) are directed around a hollow betel nut bark until they stretch across the opposite bank of the river. As the tree grows, the roots are woven together and the bridge strengthened to withstand significant weight. 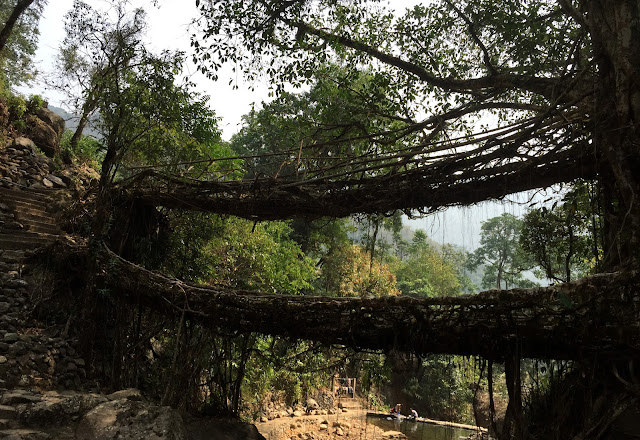 It takes anything from 15 to 30 years to get a bridge started, and then they go on and on, until the tree itself dies.

Here is one bridge, in the making. Perhaps in another 10 years it will be ready. Ficus trees have very long lives; so these "Living Bridges" of Meghalaya continue to live and grow for many decades. 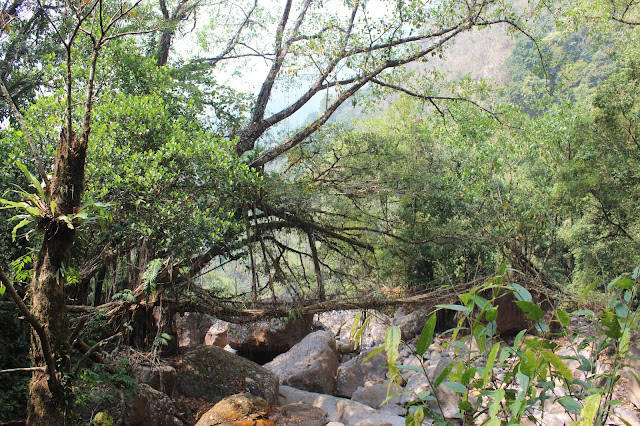 The bridges are not easy to reach. Meghalaya is made up of valleys, and the bridges are usually at the bottom of the valley, where there is a river flowing below. It's usually a long trek down, for example, this one in Cherrapunjee. 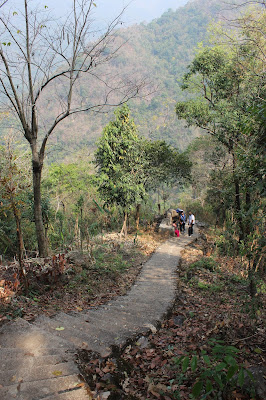 There are several Living Root bridges in Meghalaya. There's one bridge in fact, which has been used to create seats to watch a football match :) Some bridges, like the first one in this blogpost, are on two levels (called double-decker bridges). Some are twin bridges built parallel to each other.

It is a fully developed Culture of Bridges, in which one generation invests patiently for the coming generation. How amazing is that!
Posted by Karishma at 5:18:00 PM No comments: