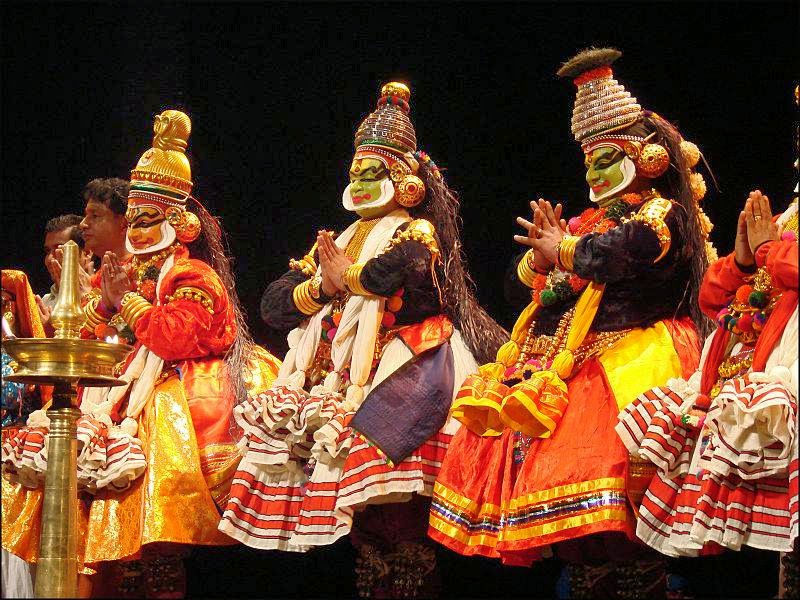 Krishnanattam - a temple dance form - covers the story of Krishna in eight parts. The first part is his entry to earth as an avatar of Vishnu, while the last covers his ascension to heaven. The intervening parts describe the world-changing events that his heroics wrought.

His righteous defeat of the corrupt and his love of dance and music – sounds like the perfect man, tough yet tender, all-knowing yet silent, serious yet fun-loving.

That should explain the reason for a dance form dedicated to him.

The costumes are elaborate, with face paint in green or orange and for some roles, black. The elaborate head dress (called kiriitam) and masks denote characters based on their importance.

The performance is conducted over nine nights at the Guravayoor temple site with a huge lamp in the foreground. On the eighth night, Krishna's death is shown and the ninth night, his rebirth. After all, the story can't end with his dying can it?

This rare art which formed the basis for the more popular, Kathakali, continues to thrive in the region only due to the support of the temple trust.

Leather-work Artisans in a village near Ajmer 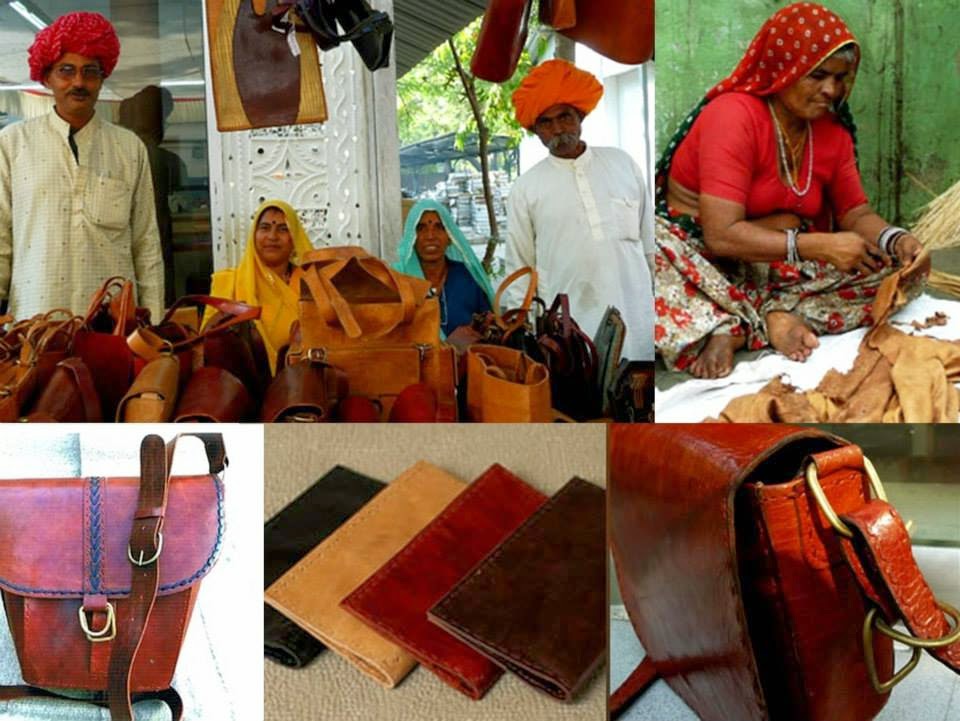 For well over 300 years leatherwork has been the primary occupation of a particular group of artisans in Rajasthan, India. This group is adept in the preparation and tanning of hides and few could match their skill in the making of saddles, harness or tackle. In the past they were sought after to furnish the leather armour for the cavalry. Historically, they have also produced containers for gathering and storing water. They also make shoes (juti) and the ornamented neck belts and face decoration of herd animals.

Modern India has little need for these items however, and the traditional skills of these artisans are vanishing. In 1976, as an initiative of Ravi J Mathai of IIM Ahmedabad, and the National Institute for Design, a leatherwork co-operative was formed in Jawaja. Jawaja had two goals: eliminate toxic or ineffective stages in production and design a new line for the contemporary market based on traditional strengths and skills. Now these products are exported widely.

Jawaja is in the Ajmer district, about 3.5hrs drive from Jaipur, on the way to Jodhpur. The cooperative through which the leather production is managed is called the Jawaja Leather Association.

This is the Seshadri Iyer Memorial Hall. Its foundation stone was laid in 1903 by the British Resident of Mysore, Donald Robertson. Notice the classic European style; supported by Tuscan columns, and porticoes. 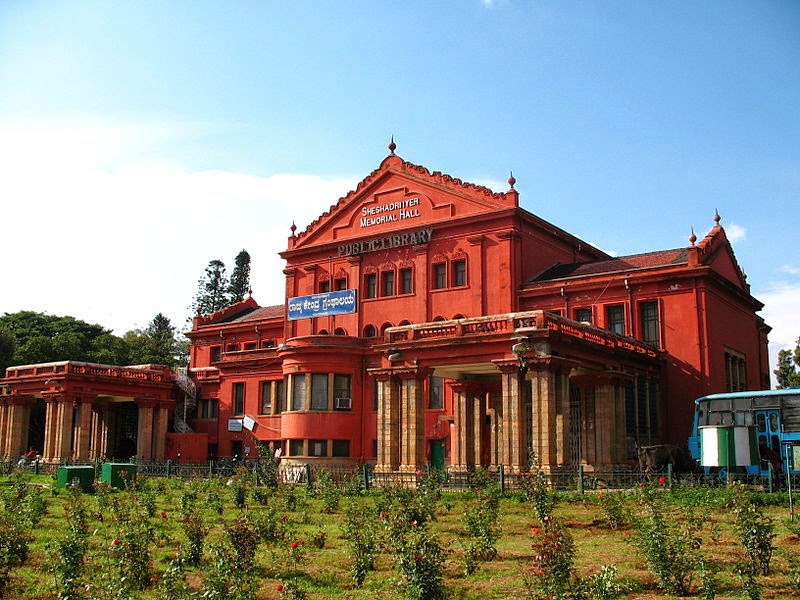 
The hall is named after 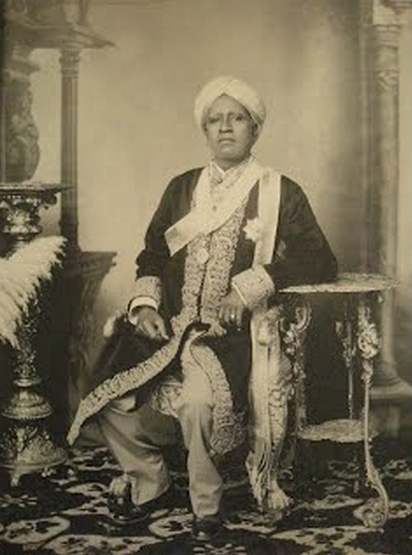 Sir K. Seshadari Iyer, who was the Diwan of the State of Mysore from 1883 to 1902. He is credited with numerous initiatives like the electrification of KGF and Bangalore from the Shivanasamudra Hydro-Electric power project (first in Asia), critical measures taken to save plague-afflicted Bangalore (in 1898) and starting off Victoria Hospital in 1900.

Seshadri Iyer came from a family of lawyers (both his father and his brother were vakils in Calicut). Strangely, Seshadri Iyer did not attend school until the age of 11. Maybe to make up for lost time, he went to mutiple schools at Calicut, Cochin and Trivandrum, passing his exams with distinction. He enrolled in Presidency College Madras, and obtained a Bachelor of Law degree from Madras University.

He joined the Mysore kingdom's administrative service in 1868, and rose quickly through various appointments, to become the dewan in 1883. He administered Mysore for a span of eighteen years. He focused on building infrastructure for transport, irrigation and mining. It was Seshadri Iyer who developed the residential extensions of Malleswaram and Basavanagudi in Bangalore. He constructed the famous Glass House at Lalbagh and set up the Victoria Hospital in 1900. He drew up plans to establish what is now called the Indian Institute of Science (although he did not live to see this plan fructify).

When he died in 1901, Lord Curzon, the viceroy and governor-general, supported the move to build a memorial to him (The Seshadri Iyer Memoria Hall at Cubbon Park). There is also a statue of Seshadri Iyer in the garden.
Posted by Unknown at 1:48:00 PM No comments:

The marble carvers (murtikars) of Jaipur

In the mid-1700's, Sawai Jaisingh II invited artisans and sculptors to settle in the newly planned city of Jaipur. You can still see them at work.

The photo below is of a murtikaar's assistant cleaning marble in the walled city. In the bottom left corner of the photo you can see "geru", that is powdered red stone, mixed with water. This is used by the assistant to highlight or mark areas of the sculpture which need more finishing or more detailed work. 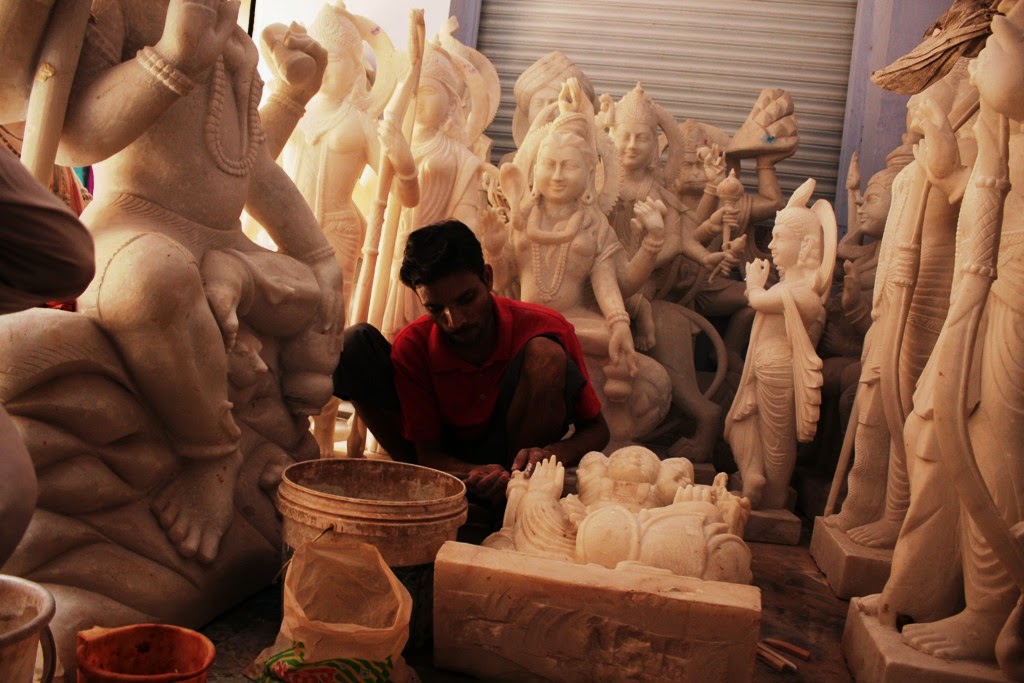 The murtikars and their descendants continue to work the traditional way, and as their fame has grown, demand for their sculptures comes from all over India. Many sculptures for temples outside India also are made in Jaipur. 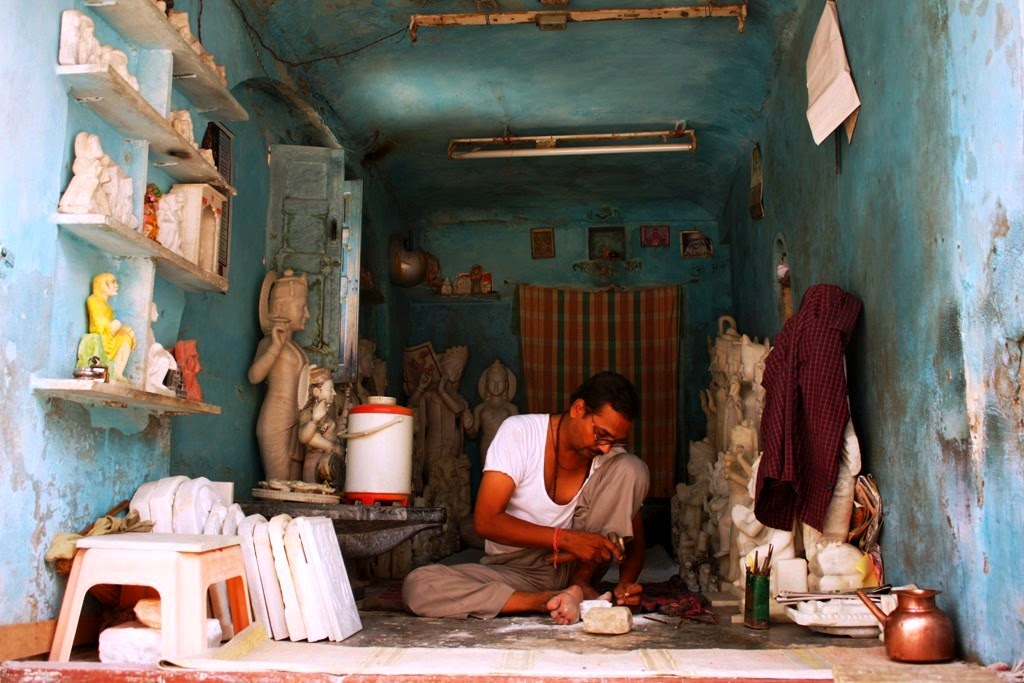 The themes are usually statues of gods and goddesses, such as the ones you see in this photo. But they also often make busts of political leaders, educators, etc, based on custom commissions. 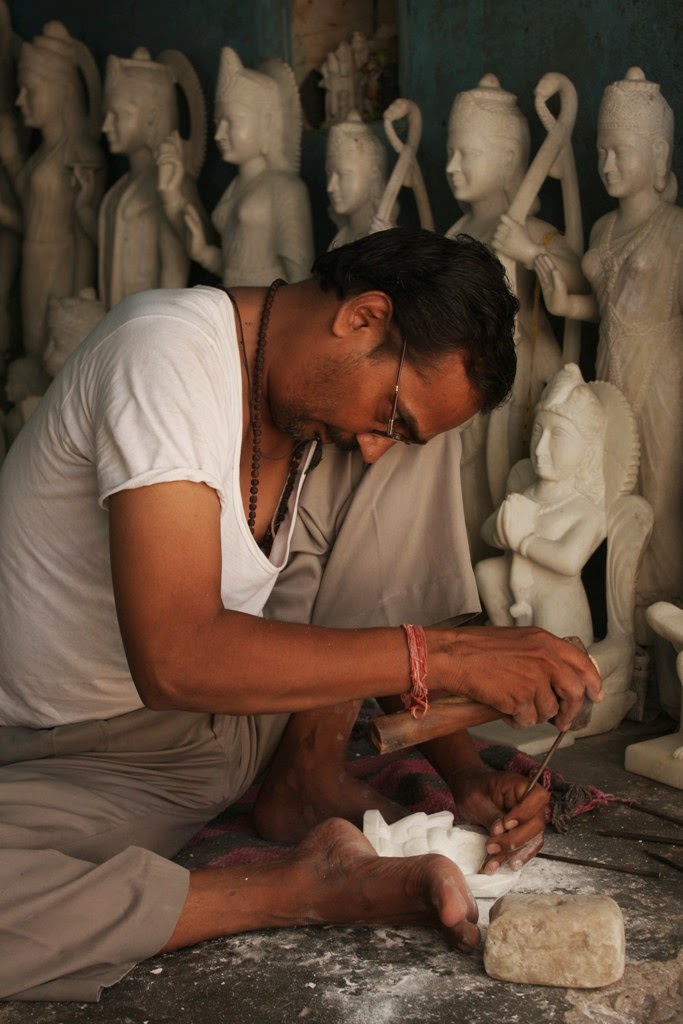 Originally the murtikaars were Brahmins; but many other communities have joined this profession.
Posted by Deepa at 12:44:00 PM No comments: