The ‘white-town’ of Chennai, like the white town of  Mumbai and Kolkata, was the part of the city where Europeans lived and worked. These parts of the city were often better planned and cleaner than the ‘native-town’.


Officially known as Fort St. George, this white-town was the first English fortress in India, founded in 1644. The city of Chennai grew around this fort. Today it is the administrative headquarters for the legislative assembly of Tamil Nadu state. 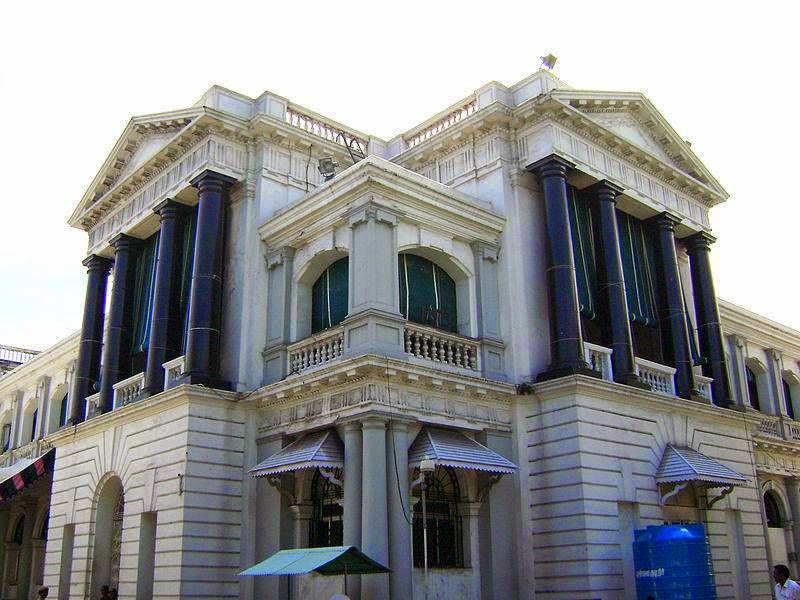 The first building to be seen on entering the Fort through the sea Gate is the Neo-Classical Secretariat, which is today the seat of the Government of Tamil Nadu. Behind it lies the Legislative Council Chambers. With their handsome Classical lines and facades embelished with gleaming black pillars, these impressive buildings, built between 1694 and 1732, are said to be among the oldest surviving British Constructions in India.

Photo source: Wikipedia
Posted by Unknown at 7:17:00 PM No comments: 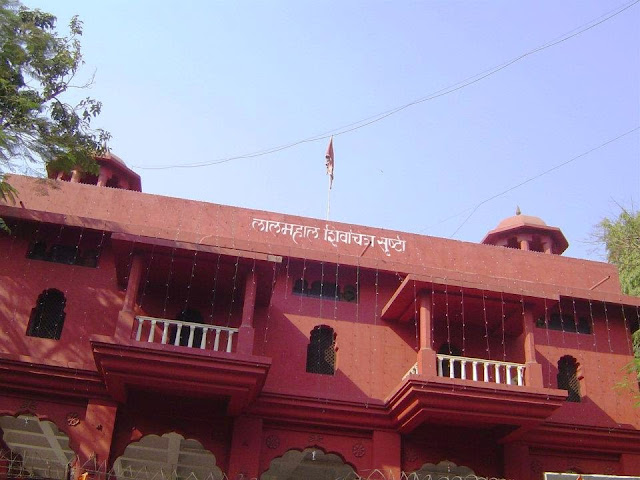 This place has many stories associated with it, mainly the story of Shaista Khan, whose fingers were cut-off by Shivaji. Shaista Khan was a Subhadar of the Mughal army, who occupied Lal Mahal, and Shivaji made a daring guerrilla raid to recapture his childhood home. Shaista Khan escaped by jumping through a window / balcony, but lost four fingers in the process.
Posted by Unknown at 3:13:00 PM No comments:

What you see below is a Yakshagana performer in costume. 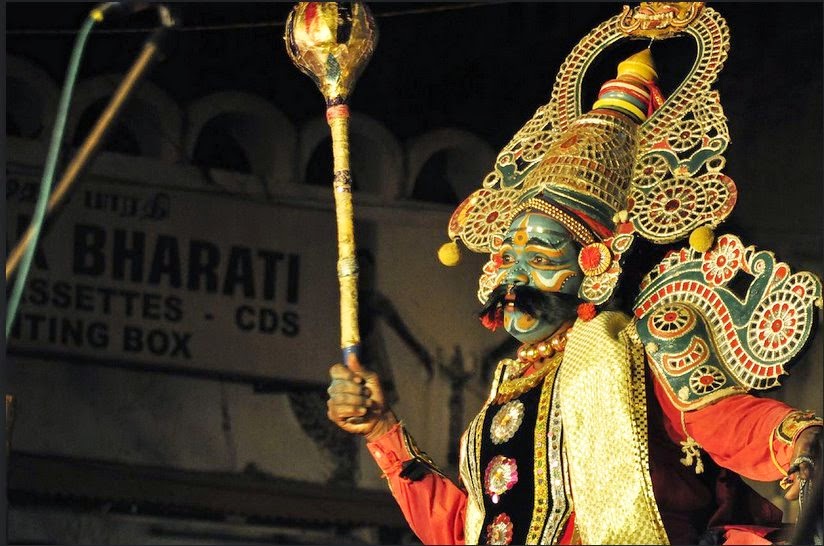 Yakshagana is a theater form that combines dance, music, dialogue, costume, make-up, and stage techniques with a unique style and form. The art form is popularly performed in the Malnad district of Karnataka. This performer was in Chennai, perhaps at the invitation of the people at Dakshina Chitra.

Traditionally Yakshagana is performed at night, from dusk to dawn. Its speciality lies in the fact that the music is considered to pre-date classical "Karnataka Sangeeta". In recent times however, there has been a growing voice of complaints against the 'distortion' of the Yakshagana traditions. Some people disapprove of the imitation of popular-cinema dances, playing new percussion instruments, the display of commercial banners on the stage, and the colloquial language that is sometimes used.

As always, the question is - should the art forms change, to appeal to new audiences, or should they stick to the traditional format? Should we think of this as the evolution of the art form, or death of tradition?
Posted by Unknown at 7:32:00 PM No comments:

Archaeological Museum at Sarnath - an absolute must-see place with Ashoka's Lion Pillar as well as several other findings from the site. This is the very first ASI museum in India. 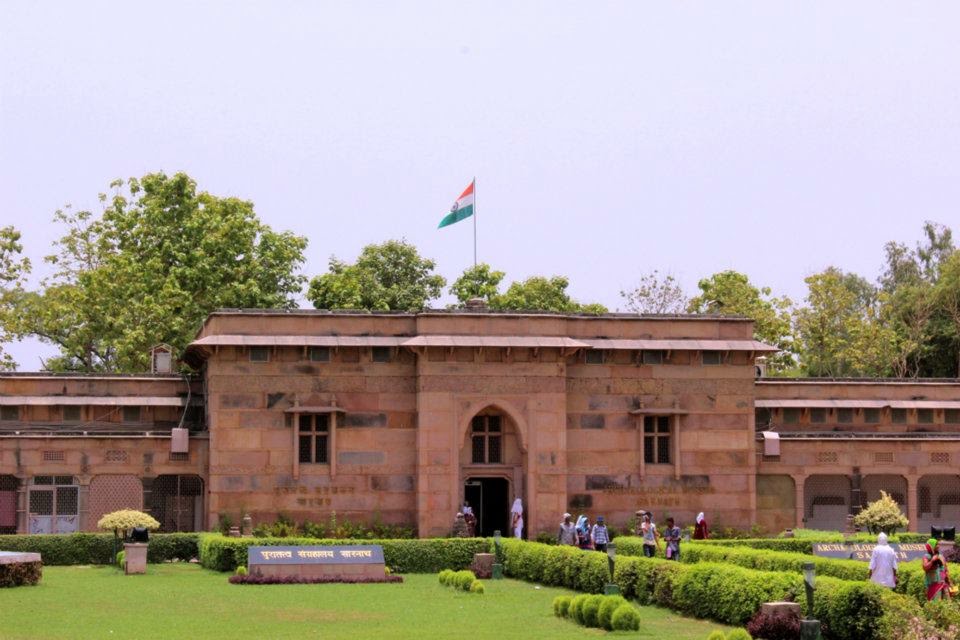 This sculpture shows the warrior god Skanda in a temple carving at the Brihadeeswara temple in Thanjavur. Here he is shown riding his mount, the peacock, with his two wives flanking him. In other common representations he often has six heads, and holds spears or bow and arrows. He is also called Kartikeya, Subrahmanya and Murugan in south India.


In south India Skanda is also known as Murugan. However, it is conjectured that Murugan was originally a separate Dravidian god who has been later assimilated into Shaivaite mainstream. Murugan is a chief deity of the ancient Tamils of South India. Murugan is not only a very popular god among South-Indians, but is also reverred by Sri Lankan Hindus and Buddhists.
Posted by Unknown at 5:01:00 PM No comments:

A popular myth is that Shah Jahan had planned on building an identical monument in black marble on the opposite bank of the Yamuna. Before he could do so, he was deposed by his son, Aurangzeb. Wouldn't that have contrasted particularly well with this luminescent Taj at dawn? In this photo you can see the early morning soft light as it touches the cool marble. 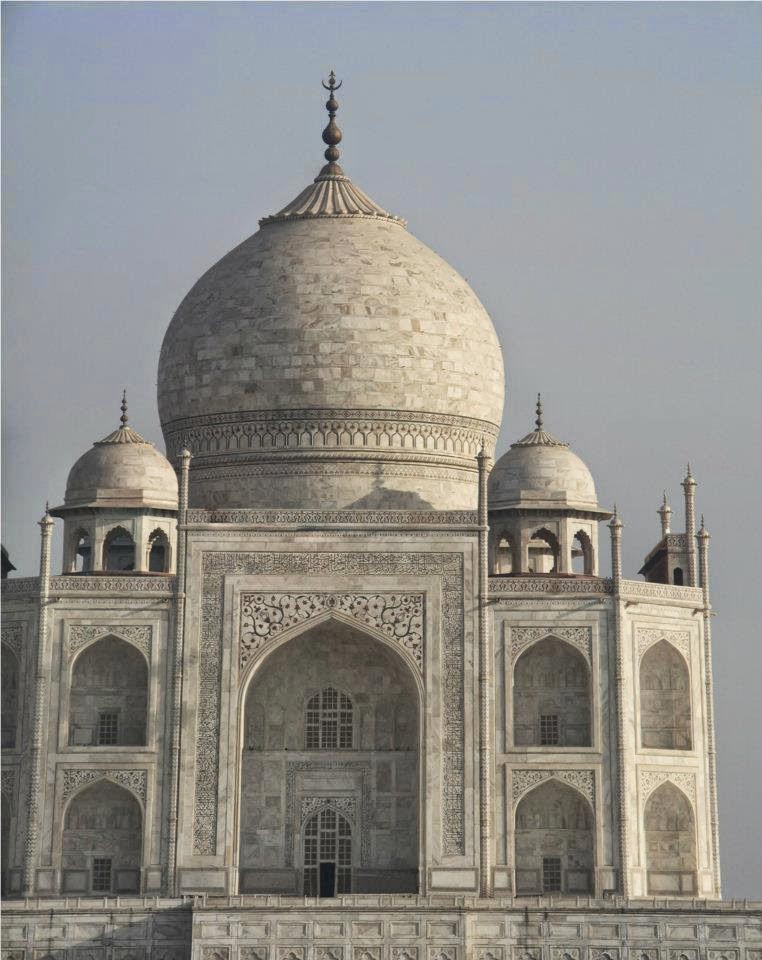 These oklhis are for placing in weddings. Deepa bought three of them for our Mumbai office. 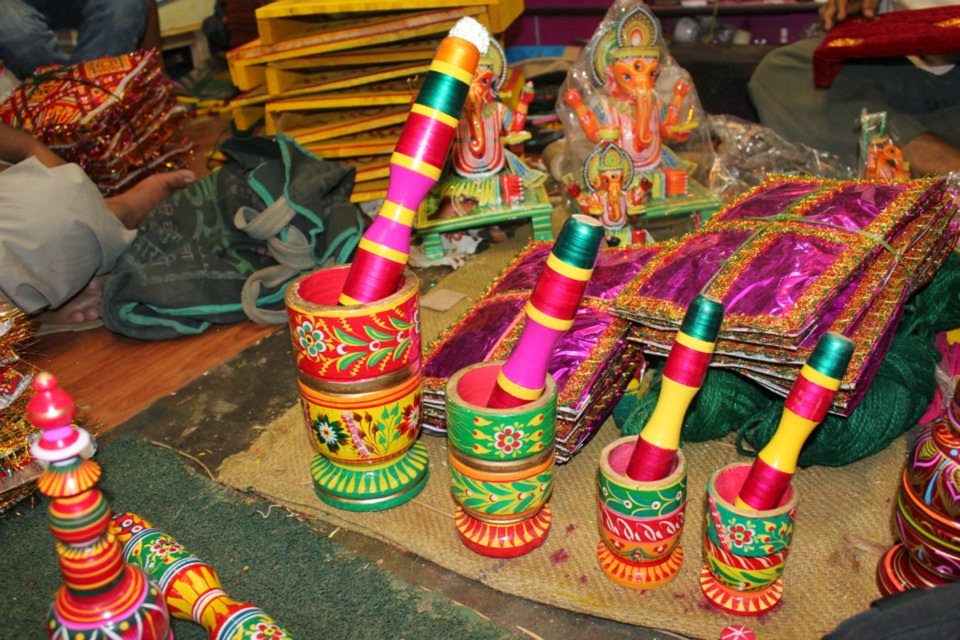 A lot of decorative and religious stuff, necessary elements of weddings. Deepa had half a mind to sit down there and ask questions about every one of these things! 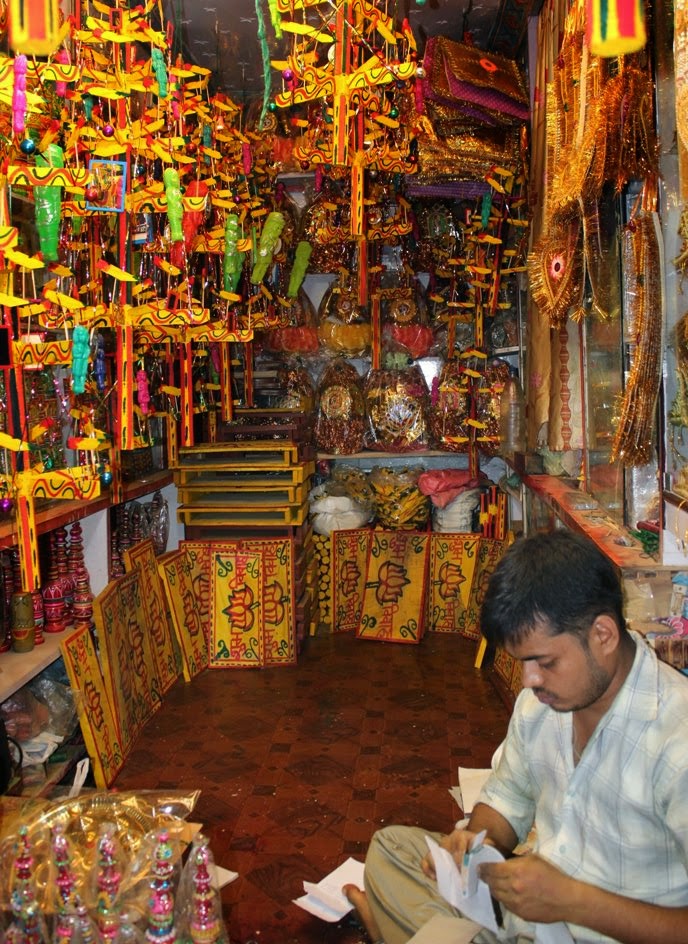 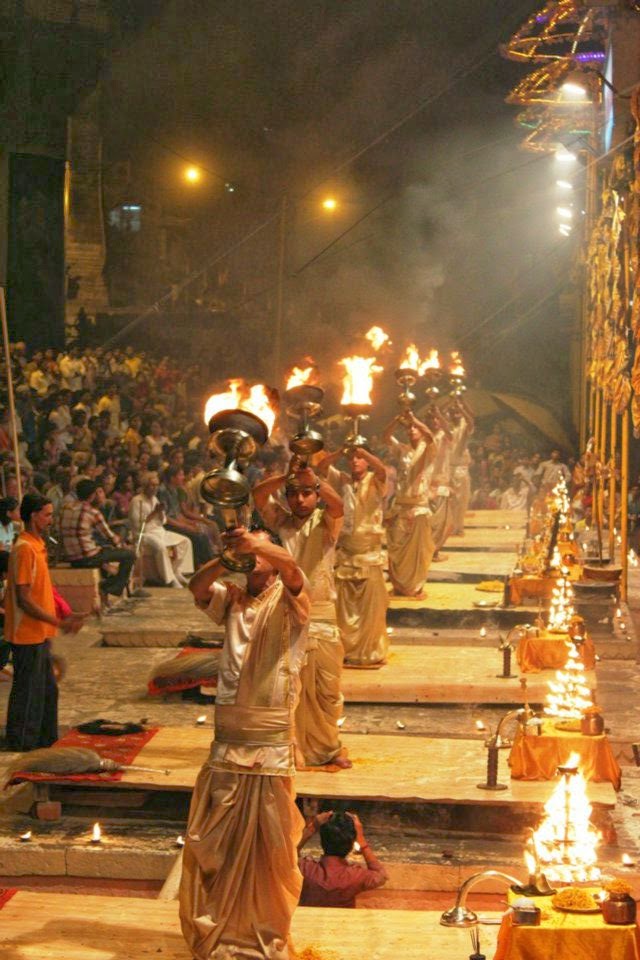 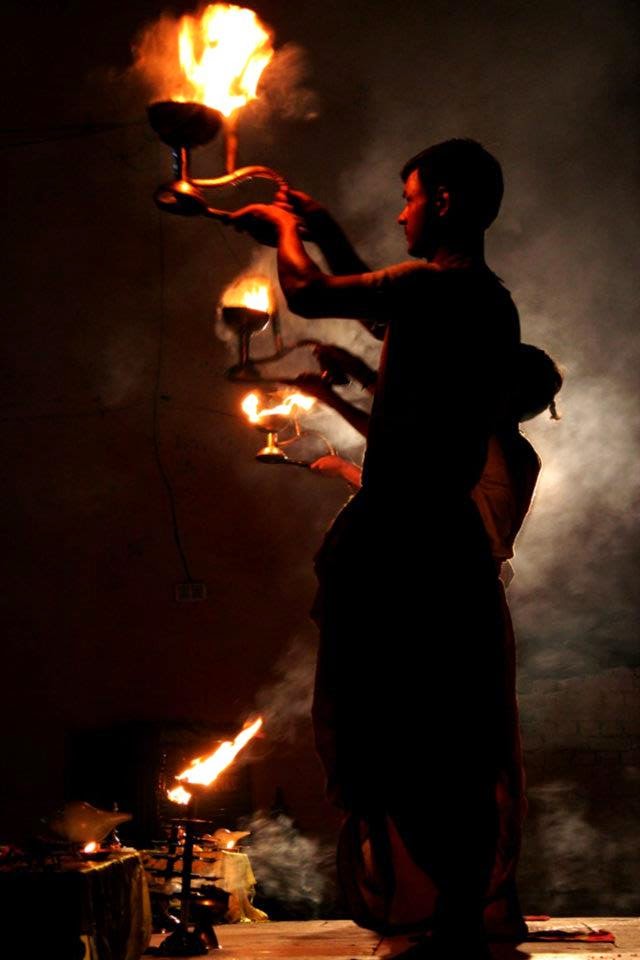 If you hire a boat at this time, you can float diyas on the water. 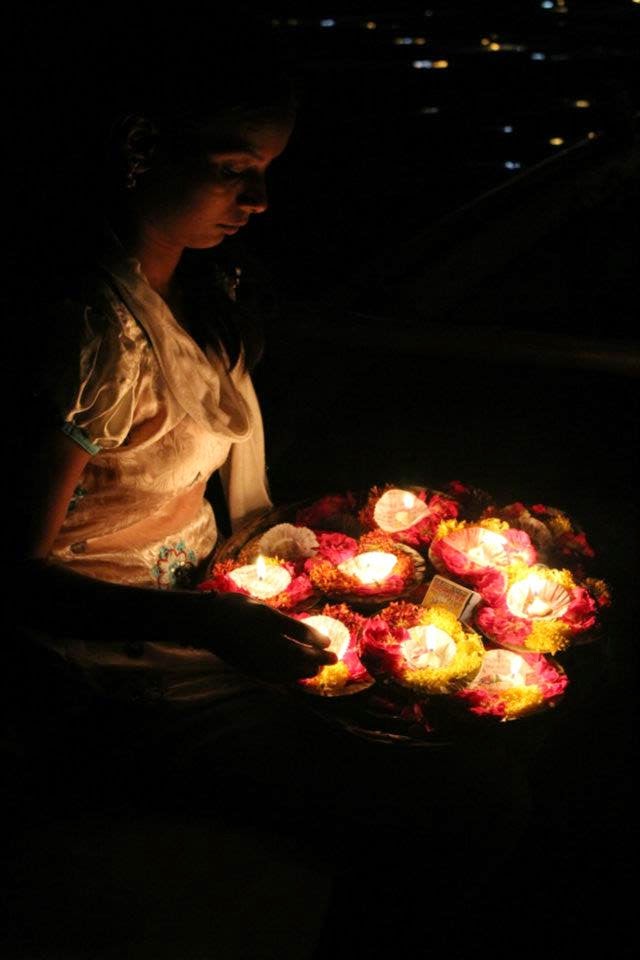 Walk through the lanes of the old city. 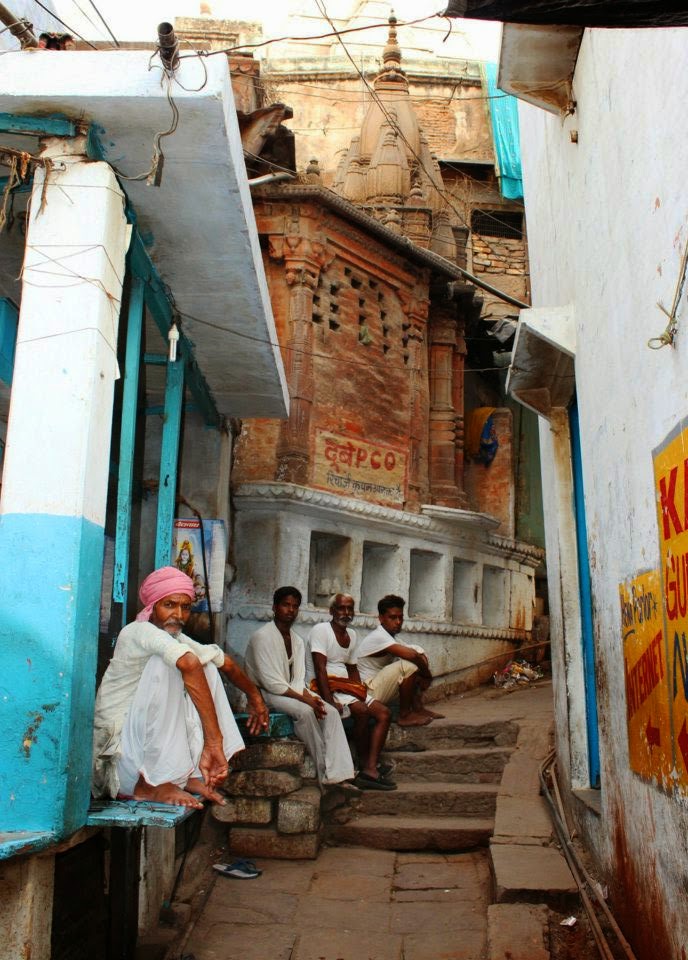 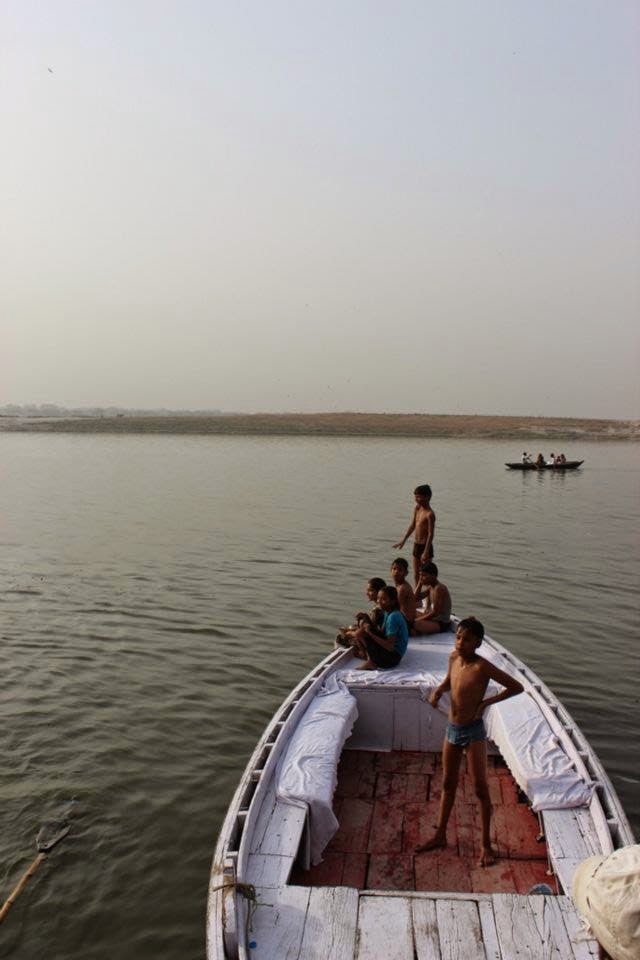 The Association of Barbers in Varanasi. 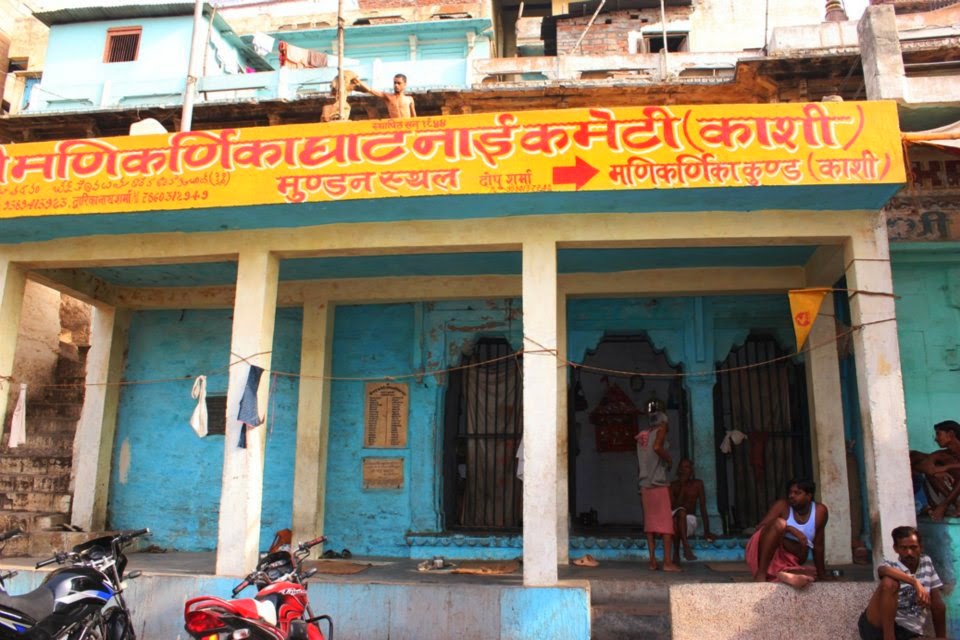 Sculptures for sale in the market - the murtikars all associate themselves with Jaipur, which is a big centre for making these things. There are probably trading and family ties to Jaipur. 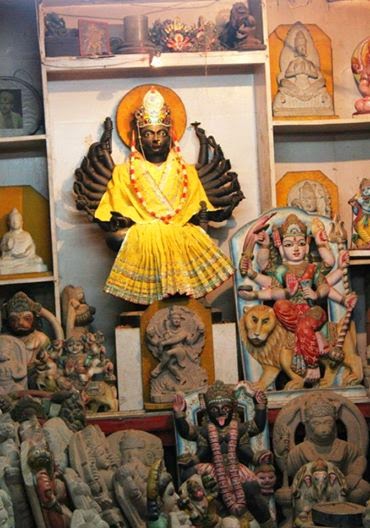 The Santhome church in Chennai. 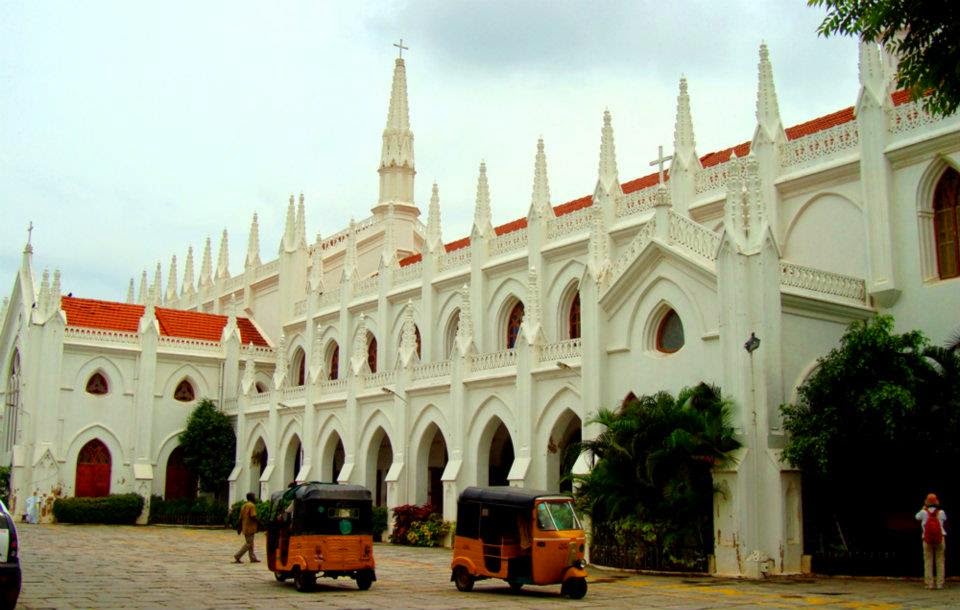 The word Santhome or San Thome is derived from Saint Thomas, one of the twelve apostles of Jesus Christ. South Indian Christian belief is that the apostle came to India in A.D.52, was martyred in A.D.72 at St.Thomas Mount in the City and was interred in Mylapore. A church was built over his tomb and this is known as the San Thome Basilica.


It is believed that it was St. Thomas who first brought Christianity to India. Certainly south India saw the establishment of the religion long before the European traders after Vasco da Gama began their proselytising activities in the subcontinent. There are only three basilicas in the world that are built over the tomb of an apostle, the other two are St. Peter's in Rome and St. Jame's in Spain.

Here is a picture of Jesus, with two peacocks, in San Thome Basilica. 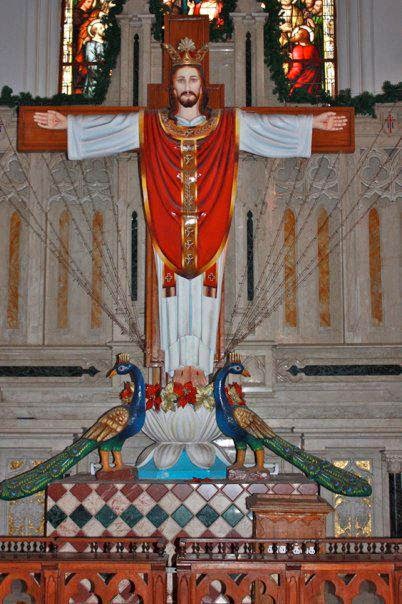 This kind of Indian Christian iconography is quite common, especially in south Indian states. Garlands and peacocks will adorn statues, and Mary may appear in a Sari.
Posted by Unknown at 7:02:00 PM No comments:

These carvings on the walls of the Brihadeswara Temple depict the coronation of Lord Rama, after 14 years of exile and a war with the demon-king Ravana. The event is known as Ramar Pattabhishekam in Tamil. 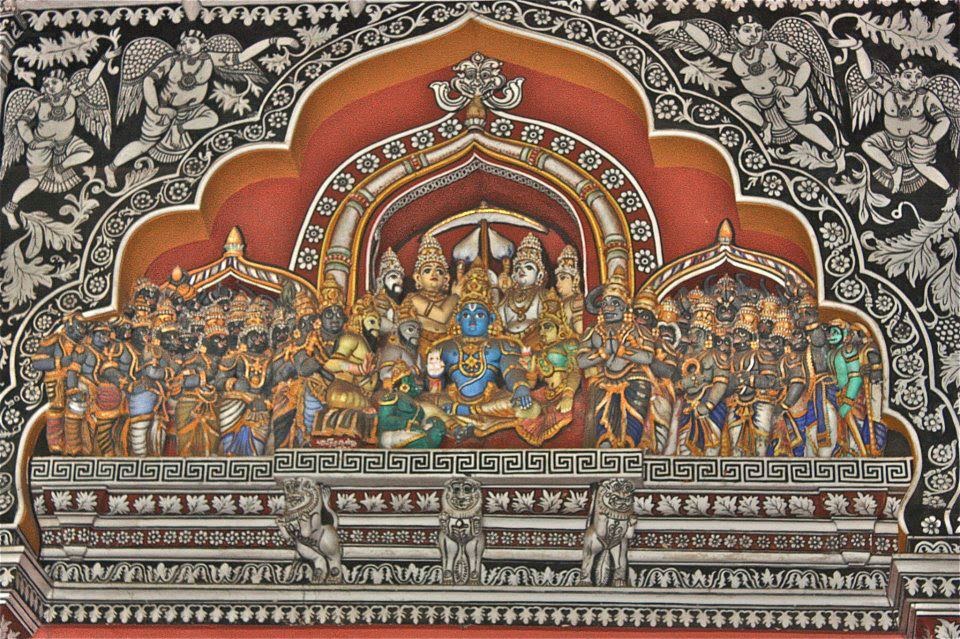 To Rama's right are his 3 brothers Lakshmana, Bharata and Shratughna. Two female (?) attendants with fly-whisks stand behind Rama.To Rama's left is Sita, in a green blouse. Behind Sita is Lakshmana's wife Urmila I think. The monkey and bear troops who assisted in the battle are in attendance on the right. Next to Sita is Hanuman (standing), the numero uno monkey. The troops to the left in attendance are also monkey and bear army, but led by Vibhishana? Not sure.

A (translation of the) description of the scene from Valmiki's version of the Ramayana describes the crown with which Rama was coronated:

"With which crown, long ago, Manu the emperor was adorned while he was consecrated and with which, the kings who followed in his line were successively adorned while they were coronated, that crown, studded with precious jewels, fashioned by Brahma at the beginning of creation and dazzling with splendour, being kept according to practice on a throne adorned with many kinds of precious stones in the council-hall, studded with gold, graced with abundant riches, decorated and shiningly made with most charming jewels of various kinds"
Posted by Unknown at 6:09:00 PM No comments:

Temple architecture in south-India is highly developed and diverse. However, the shastras (sanskrit for treatises, and scriptures) have articulated specific rules on temple architecture, and one will see these underlying similarities based on these rules.

Besides these, a temple always contains tanks or wells for water (used for sacred purposes or the convenience of the priests), dwellings for all grades of the priesthood are attached to it, and other buildings for state or convenience.


In the Brihadiswara temple seen over here, the central Vimana (housing the sanctum) is taller than the entrance gopuram. This is seen in only four of the Chola dynasty temples. After experimenting with this, they reverted to the usual style of very tall entrance gopurams and only a smaller temple in the middle.

This is the entrance to the grand Brihadeeswara temple in Thanjavur. The temple is a part of the ‘Great Living Chola Temples’ declared by UNESCO as a World Heritage Site. 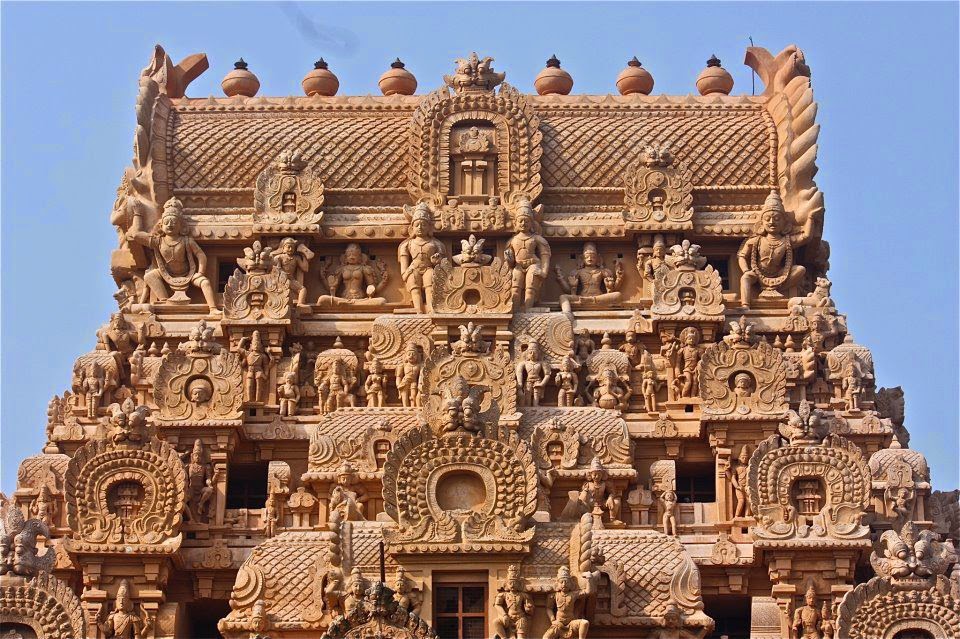 In the photo you can see the upper half of the Gopuram, a pyramidical structure which marks the gateway to the temple. Right on top, in the centre, is the face of the Kirtimukha, the demon who ate his own body (until only the face remained) at the command of Shiva and was blessed that he would always be placed at all Shiva temples. In this small section of the gopuram, you can see at least 14 Kirtimukhas.

As the story goes, Shiva, one of the main Hindu Gods, was confronted by a demon named Rahu. Rahu had been sent by the giant-king Jalandhara to abduct Shiva’s bride Parvati. When Shiva realized this, infamous his anger knows no bounds. His furrowed brow gave birth to a strange creature with glowing, bulbous eyes and the face of a lion. Shiva then ordered this creature to devour the demon Rahu. With nowhere to flee, Rahu himself bowed down before Shiva and began to beg for forgiveness. Shiva took pity on Rahu, and asked his lion-faced creature to desist. At this the ravenous creature protested, saying “But I am hungry! Now what am I supposed to do?”

Shiva then instructed the creature to eat its own limbs, which he did. The creature did not stop at his limbs, but kept eating his whole body, until only his face remained. At this point Shiva realizes that the creature was one of his greatest creations, and thus named him Kirtimukha where ‘mukh’ means face and ‘kirti’ means glory. Shiva apparently promised him that he would find a place in every one of Shiva’s temples, thus living up to its given name.


The Kirtimukha is often considered symbolic of the destructive powers of Shiva Mahabhairav ( An avatar of Shiva that is known as the destroyer of demons.) Shiva’s power is often considered to be the source of destruction but it is this destruction which brings about the cycle of birth and regeneration. In Buddhism, Kirtimukha has been appropriated as a symbol of impermanence.

The glory of the Kirtimukha has indeed spread wide and far- it is visible in temples all over south-east Asia, including India, Cambodia and Thailand.