Gujarati architecture - What is an Otla?

On one of my visits to Ahmedabad, I photographed the entrance of a Gujarati merchant house in a traditional neighbourhood. This type of entrance area is called an otla or otta, and it consists of a narrow raised plinth with steps. 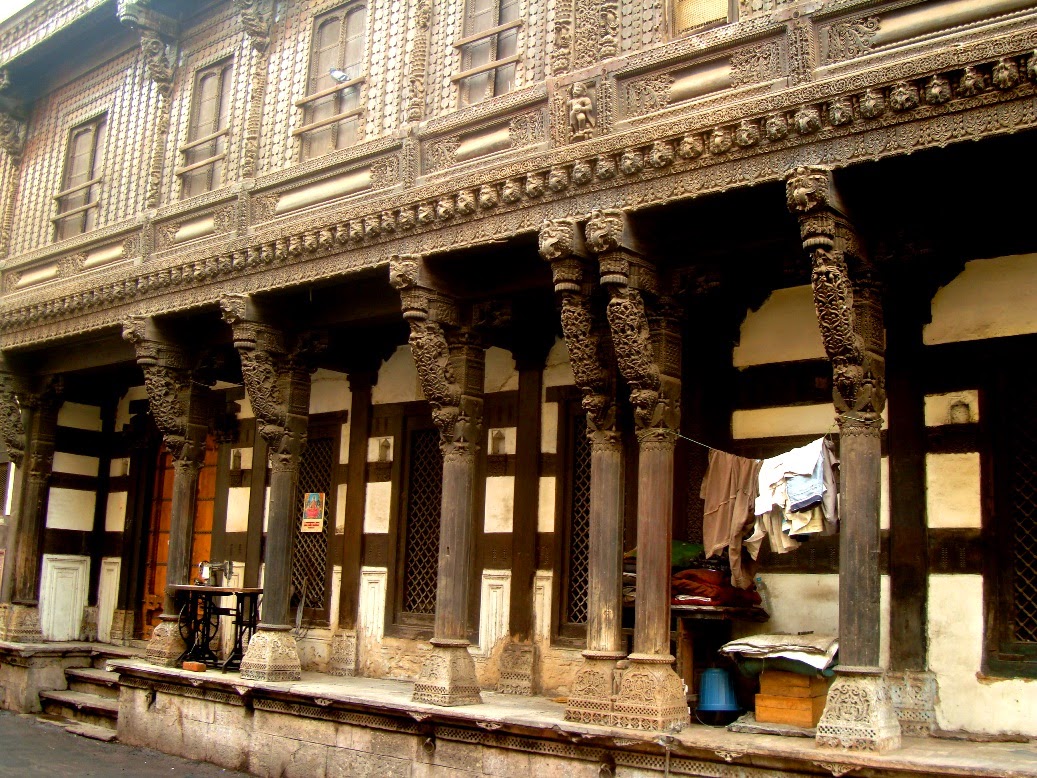 The otla acts as a sort of communication zone between outsiders and the residents of the house. Typically in an otla, there is a row of columns supporting a wooden facade. The otla is often carved and decorated profusely, to show the social and economic standing of the household. 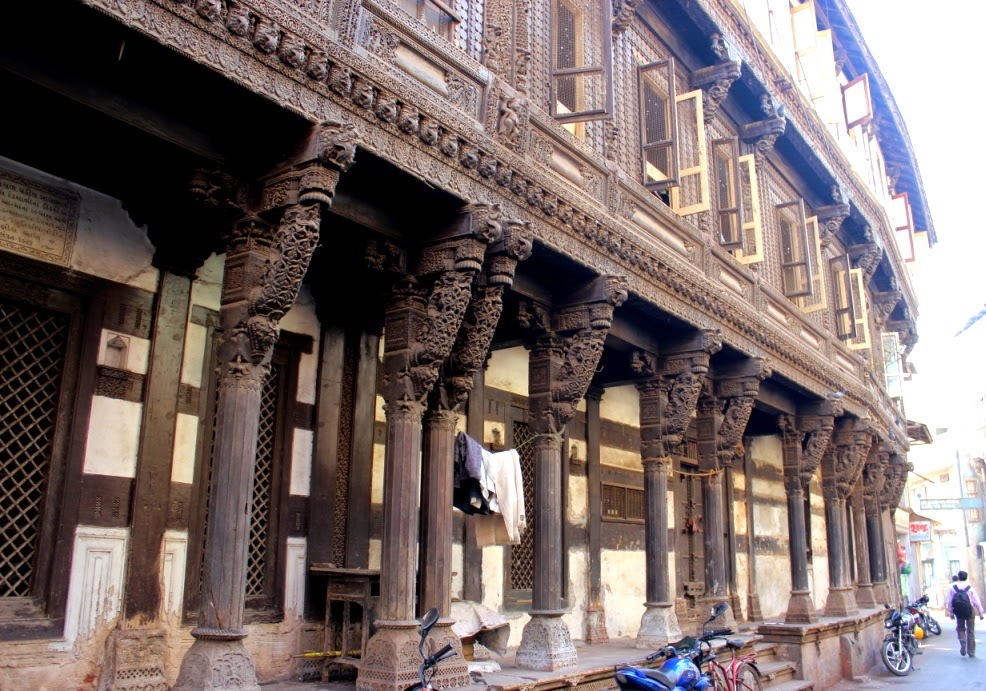 The American artist Edwin Lord Weeks painted a lot of otlas when he visited Ahmedabad in the 1890's. Here's a lovely one. The Gujarati love for ornamentation is visible beautifully in this painting. This type of architecture is characterised not only by the profuse nature of the abharana (ornamentation), but also by the continuity - meaning, there is no break in the design, we go from carving to carving and the entire area leaves the mind reeling with the overall impact of the design. There is no time to look at the details....we only see that later, when we come closer to it, and then we marvel even more. 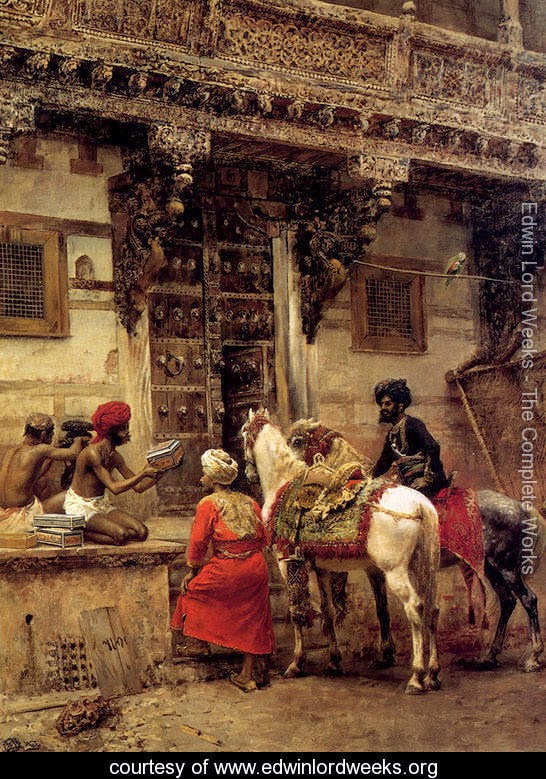 Here is another painting by Lord Edwin Weeks: here also, you can see the profuse ornamentation. But also here we see another feature, a plain lintel beam. Beams are bulky and difficult to hoist, so often they were left uncarved, because they could otherwise be damaged in the process. In such cases, either the beam was left open, or ornamentation was later added using thin carved wooden strips, which were fixed by nails. 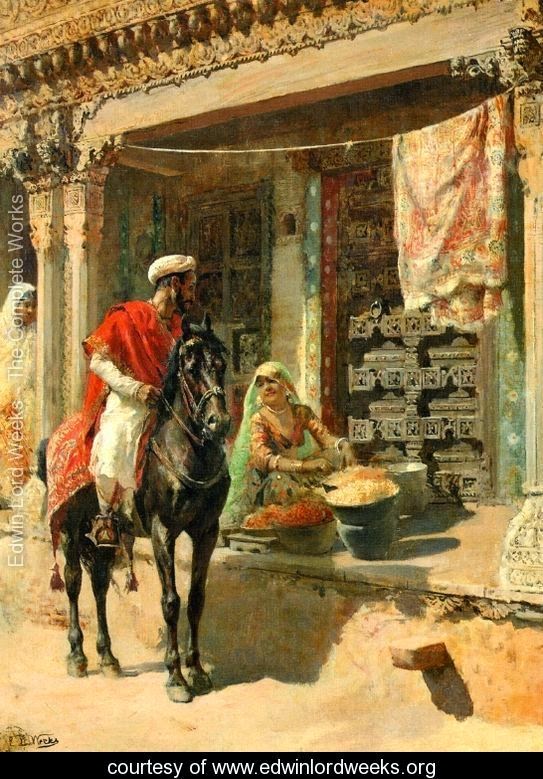 By the way, when I walking in one of the pols, I found a house that looks exactly like this one painted by Lord Edwin Weeks :) :) See the similarlity below. I was convinced it was the same house!! Edwin Weeks used to photograph the areas first, and then paint later. So his paintings are quite accurate. 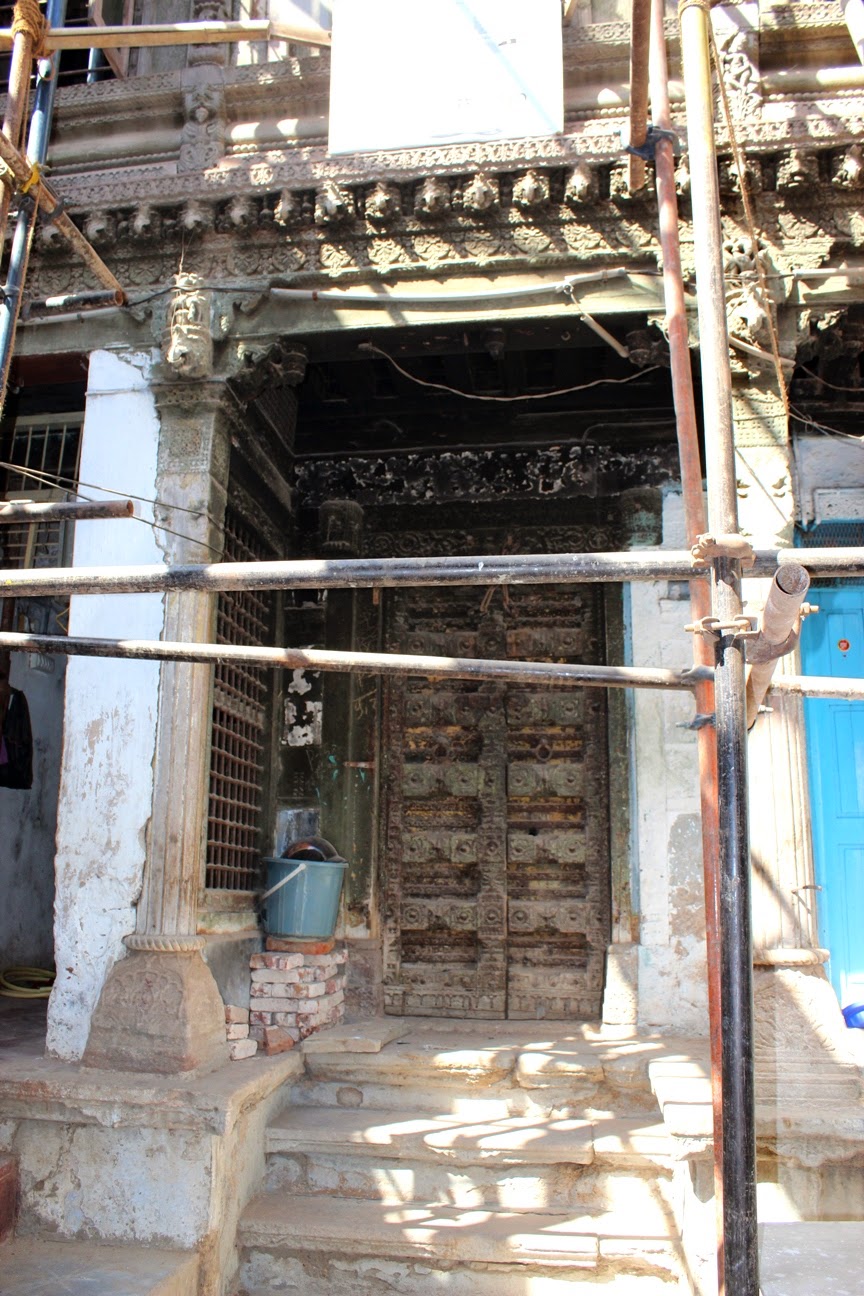 I have lots of photos of different houses in the pols of Ahmedabad, with otla of different types and colours, carved doors, pillars, beautiful woodwork designs etc. In some houses, the beautiful carved woodwork has been painted over, maybe to make it look well-maintained. But actually the paint obscures the carving. See this once-beautiful house below, now the stairs are crumbling, and the windows have been boarded up with metal sheets. But it still retains its old beauty. There is some fine fern-shaped carving over the doorway. 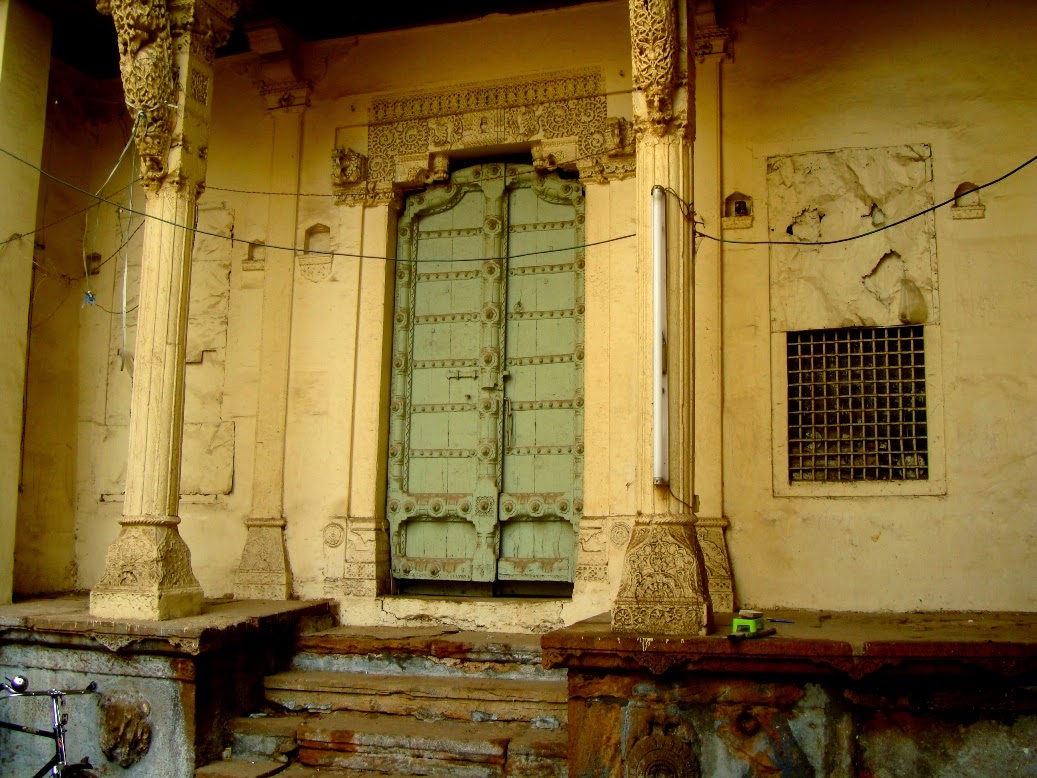 The otla need not always be such a traditional carved affair. For example, this small house is in a corner, and the otla is about 10 feet wide. However, all the typical architectural and functional characteristics of the otla are there: it is a well-demarcated area, with pillars, serving as a sort of interaction zone between outsiders and insiders. A more modern, art-decoish interpretation of the brackets has been done. 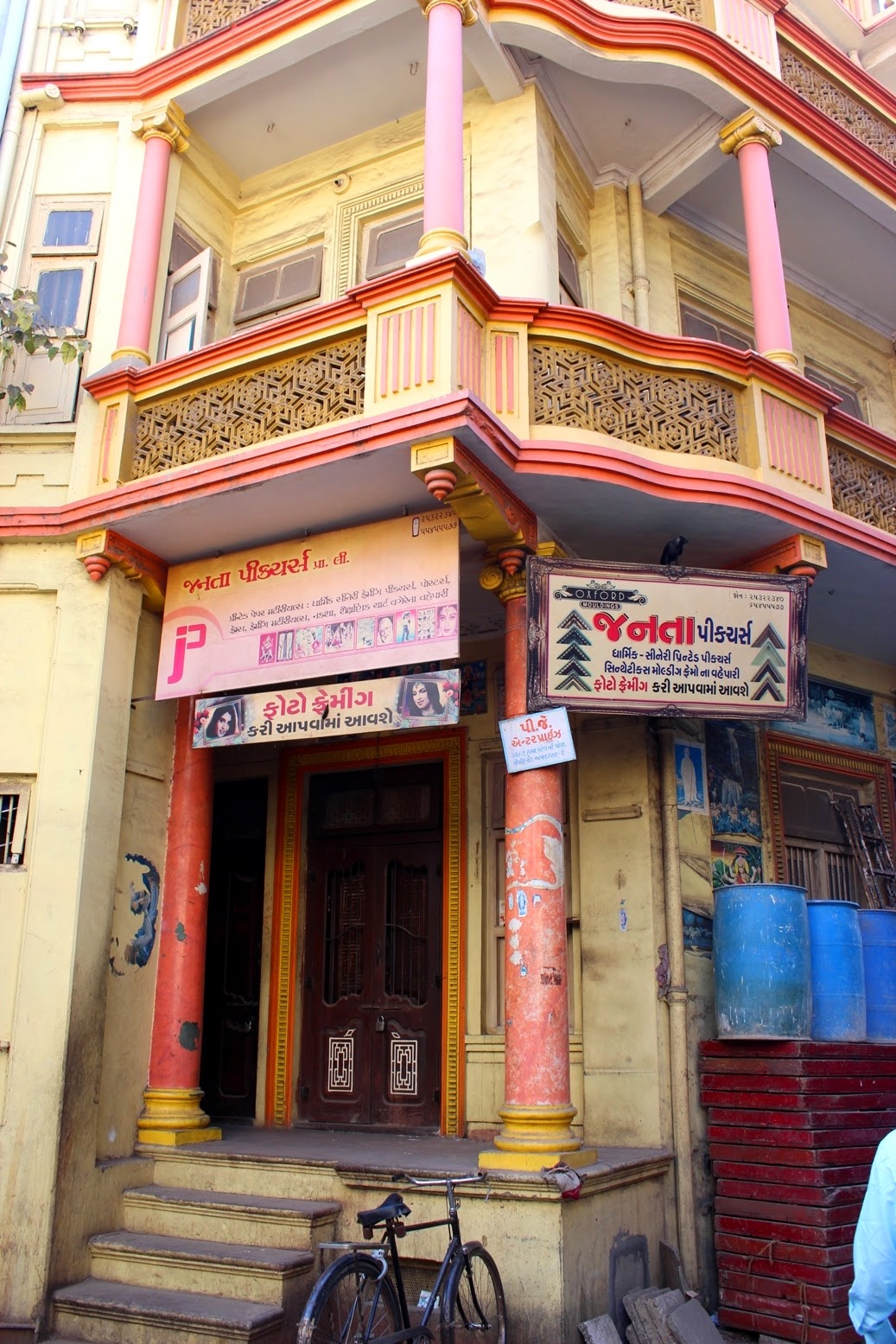 The otla is one of my favourite subjects to photograph and to marvel at. It is a place where in the evening the women of the household sit down and watch the world go by. They chat with neighbours and keep an eye on the children playing. In the past maybe the women of the house stayed inside, but these days we see them often sitting outside and enjoying the evening with family and friends. Next time you walk anywhere, look for the otla and see how it is being used!

With many thanks to Jay Thakkar, whose article on Naqsh helped me find out a lot about Gujarati architecture.
Posted by Deepa at 11:58:00 AM