The songs of Phulkari 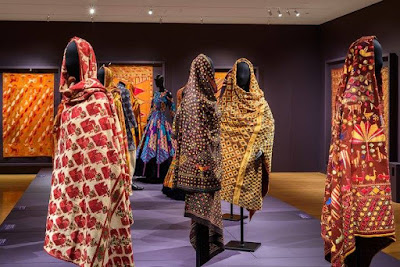 My phulkari is silken
But the colour doesn't seem right
Come quickly now, my love (let me see you)
My eyes search the road.

Phulkari is an embroidery technique from the Punjab region, and is practised both in India and Pakistan, by Hindus, Sikhs and Muslims. The word 'phul' means flower and 'kari' means craft, thus Phulkari literally means floral work or floral craft. Exquisite and labor-intensive, Phulkari embroideries have been produced by Punjabi and Haryanvi women from at least the early 19th century. Phulkaris are traditionally done in brightly colored silk thread on rough, earth-toned cotton fabric. The cotton was local, but the silk came from far off places via nomads, and was dyed in the Punjab. Phulkaris are deeply ingrained into Punjabi culture and several folks songs sung by women have Phulkari as the motif.

When done for domestic use, Phulkaris function primarily as women’s wraps (odhnis). Originally, they signified a woman’s material wealth and were deemed an important part of her wardrobe. In addition to being worn, phulkaris are also placed on woven cots (charpais) as seat covers for special guests, or draped on dowry chests or hung in the home as decoration during religious festivals. They are presented to temple deities, or to gurudwaras as a cover for the Guru Granth Sahib (the Sikh holy book). 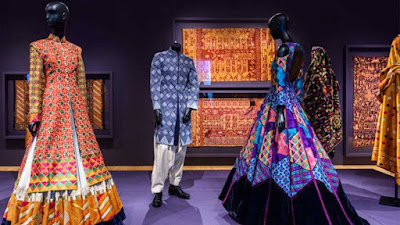 During colonial rule, Phulkaris became part of gift basket locally described as “dali” that were presented to the British and other high officials on Christmas and also as a gesture of gratification.

Following Punjab’s devastating partition in 1947, many treasured Phulkaris were lost or left behind in the traumatic events of the Partition. The Partition Museum in Amritsar has a Phulkari placed on a well, representing the tragedy of the many women who threw themselves into village wells in attempted suicides. To me it seems as if the death of all that was beautiful in the Punjab has been portrayed very poignantly via the Phulkari. 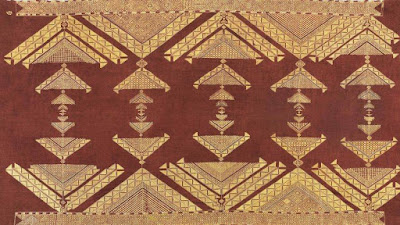 Today in Amritsar, there are plenty of machine-made Phulkaris, but they lack the beauty of the women's voices that made them unique.

In May 2017, the Philadelphia Museum of Art showcased ‘Phulkari: The Embroidered Textiles of Punjab’, with phulkaris from the collection of Jill and Sheldon Bonovitz. The collection contained all types of Phulkaris:

The Museum also showcased two gowns made especially for the exhibition by Indian designer Manish Malhotra, in an effort to highlight the couture culture and the new stories developing around phulkari. With the ace designers employing materials such as velvet and silk, a new set of audiences is being inspired to embrace the warmth of the textile tradition.

The information and text for this post came from this page, which has more about the show, and different types of Phulkaris is here: https://www.architecturaldigest.in/content/philadelphia-museum-art-showcases-history-punjabs-rich-embroidery-craft-phulkari/
Posted by Deepa at 12:39:00 PM No comments: