Gramophone recording came to India towards the end of the 1900s. The Indian elite had been importing them as a luxury item already. But there were no local recordings. In fact, many leading male artistes of Indian musical traditions rejected the gramophone. Perhaps they feared that this new-fangled device would make their music too easily accessible, and thus compromise their ability to command high prices for live performances. Or perhaps they balked at the idea of condensing a long classical music performance to meet the restrictions of this new format. 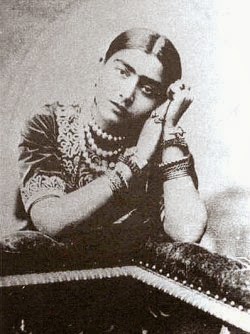 However, several female courtesans came forward to record their voices; I am really not sure why. Maybe it was a chance to become more widely known; maybe they were already very wealthy and didn't have to worry about financials. Or maybe they were attracted by the potential of this new device. Whatever the reason, it was these "nautch-women" who became pioneers of the music industry in India.


India's first commercial 78rpm disc was recorded in 1902 by Fredrerick William Gaisberg of The Gramophone Company. The singer was Gauhar Jaan, Kolkata's most famous courtesan. The recording was done in a makeshift studio in two large rooms of a hotel in Kolkata.


Traditionally Hindustani music performances were long affairs, but Gauhar Jaan devised a unique template for presenting it in just 3 minutes, which was all that a single disc could record at the time.


At the end of each recording, she would announce in English "My name is Gauhar Jaan". In those days, there were no facilities in India to cut the the master disk (acetate). So the master tape of the recording was sent to The Gramophone Company's pressing plan in Hanover (Germany). The announcement of the name at the end of the song helped the technician identify the singer. 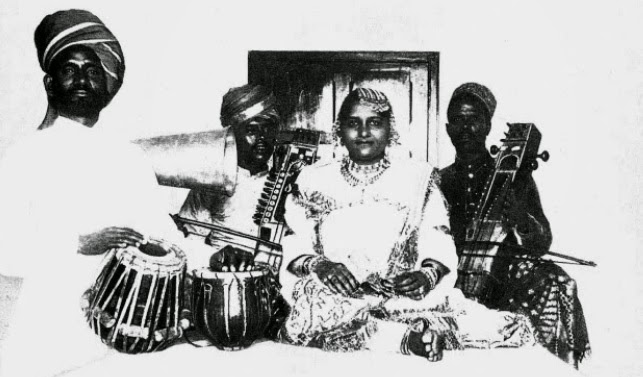 By 1903, Gauhar Jaan's records started appearing in Indian markets and were in great demand. She recorded over 600 records in 10 languages. She became very famous; so much so that when King George visited India for the Delhi Durbar, Gauhar Jaan was invited to Delhi to sing for him. She sang a special song congratulating the emperor on his coronation She was accompanied by Allahabad's famous courtesan, Janaki Bai (pictured here).

In 1908, a record pressing plant was set up at Sealdah, Calcutta (availability of plenty of lac/shellac was one of the reasons). With this plant, there was no need to send the wax masters to Germany, and as a result, the name announcements at the end of the song also disappeared. The workers at this plant called it "Baaja-Khana", the Music House. The harmonium or baaja was the most commonly used musical instrument accompanying vocalists.

P. S. Technically speaking, Gauhar Jaan was not the first recording that the Gramophone Company did. Three days before recording Gauhar Jaan, Fredrerick William Gaisberg recorded two other girls, Shoshimukhi and Fani Bala. He was not impressed with their voices. It was Gauhar Jaan who went on to achieve stardom, while the two singers before her remained unknown.
Posted by Deepa at 2:40:00 PM